Discuss everything about Honda GoldWing. Feel free to ask any question related to GoldWing.

Bought a 82 Interstate the other day. The plan was to lightly customize it to make a bagger, but now that I'm looking at it in the shop I'm feeling a little guilty about chopping it up. This is one of the nicest one I've had out of 4 or 5 previous old wings. The bike has 45,000 miles and was parked in a shop about 10 years ago due to "carb problems". So been stored indoors for the past decade (last registered in 09).

Paint and plastic is all in very good condition, no broken tabs or anything. A couple of cracks (less than 1") on the corners of one of the bag lids and the top box, but other than that it's clean. Frame is not scratched or rusted - just a small amount of surface rust on the side stand and center stand. I was going to strip it and powdercoat it but it really just needs a light touch up. Exhaust is perfect.

Engine spins nicely (not frozen) although I haven't tried to start it with 10 year old fuel in the carbs. Of course EVERYTHING has to be gone through - its been sitting for 10 years. Tank is full of rust (duh) so right now I'm in the process of dismantling the rear of the bike to get the tank out. I pulled the carbs just to see and they aren't really that bad, some varnish as expected but not horrible.

So, do I save it as a "survivor" or continue on with the customizing plan? If I go the bagger route I'm going to end up cutting quite a bit of the plastic and metal as well as new paint and powdercoat over the chrome - a path of no return to original.

I didn't take a pic of the bike when I got it but here it is in the shop semi-disassembled. 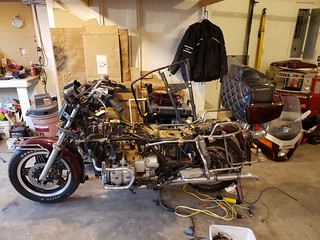 unfortunately to keep the side bags you are sort of stuck with the rack.... but I tend to agree with Gord (and paint the things that need to be painted)
-Rodger-
all it takes for evil to prosper is the want of a few good men to do nothing-Edmund Burke
The question is not how much time do you have, it is what you do with the time that you have Gandalf
"One of the greatest dignities of humankind is that each successive generation is invested in the welfare of each new generation." Fred Rodgers
"it takes 10,000 hours to become an expert" ancient saying
78 constantly modified/customized since 1978, BOTM June 2015 de-evolving this very moment viewtopic.php?f=30&t=65511
76 Ltd "cookies bike" not ready for prime time,
79 project, finished,
'86 1200 (Beth's) with motorvation sidecar, July 2017 BOTM
'17 HD Road king and 08 HD Heritage softail (Beth's). I guess you can say we have MBS
Top

rcmatt007 wrote:unfortunately to keep the side bags you are sort of stuck with the rack.... but I tend to agree with Gord (and paint the things that need to be painted)

I'm looking at the bags and rack right now. I think there is a way to cut the rack and still have solid mounting points on the bike and bags, but I also want to lower the bags an inch or so and maybe an inch or two back so I will probably come up with custom mounts that somewhat mirror the stock mounts, but lower.

There are some pics of a bagger build that Sagebrush did on this site at:
https://www.ngwclub.com/forum/viewtopic ... &start=105

Have a look and read the build notes.
Jonesz

It depends on what you plan to do with the bike in the long term. If you are going to keep it then customize it for yourself. If it will be sold in a couple or few years then restore. Restoration 95% of the time has a higher resale value. Very few people that have interest in these bikes will buy one already customized. They want to do it for themselves. IMHO
"Agreement is not a requirement for Respect" CDR Michael Smith USN (Ret) 2017
"The book is wrong, this whole Conclusion is Fallacious" River Tam
2008 GL1800 IIIA "TH3DOG"
1975/6/7/8/9 Arthur Fulmer Dressed Road bike
1975 Naked Noisy and Nasty in town bike
and a whole garage full of possibilities!!

Users browsing this forum: No registered users and 3 guests