I’ve rebuilt 8 sets of gl carbs and after the second set I bought 12 sets of 3 oem honda fuel lines for future builds, with the oem clamps, glad I did!!

Funny you should mention... 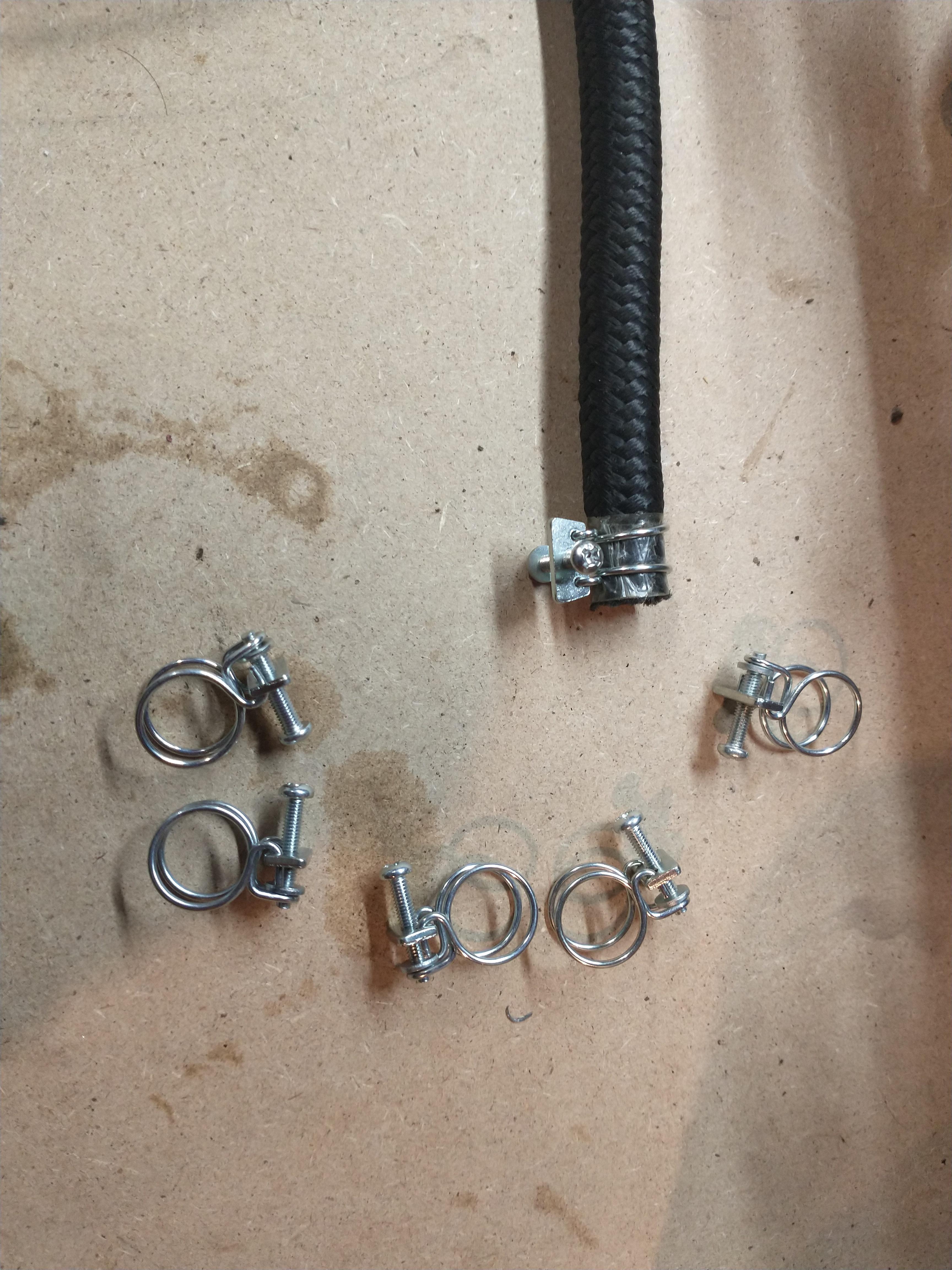 Keep your eyes and ears open and you'll learn something new, everyday.

RE: a thorough fuel tank cleaning
"And your carbs will thank you. They no longer live down stream from a sewage plant." -gregforesi

"I'd rather Ride than Shine" -RAT

I need some fuel line with oem clamps, where do you guys get them?

Depends on how particular you want to be. For OEM-correct braided fuel lines, Old Fogey's offering is the general go-to. The clamps aren't TECHNICALLY OEM, but in most cases are better, and 99% of people won't know the difference.

The new fuel lines and filter arrived the other day (thanks Old Fogey!), and I managed to get the carbs back on yesterday and the whole bike back to 100%. While I haven't put any sync gauges to it, or gotten out on the road (yet!), I have started it up a couple times, and am very encouraged with what I see. Starts easy, can drop it off choke almost immediately, and while I'm getting a lot of chain slap sound, a lot of that might be because I'm idling it at about 500 rpm while it's technically still cold. But it idles on all 4, so I'm not complaining.

On a whim, I decided to see how well the 1000 ran without any addressing of sync, tuning, etc., just to see what it would on the road and, well... the answer is "quite well". 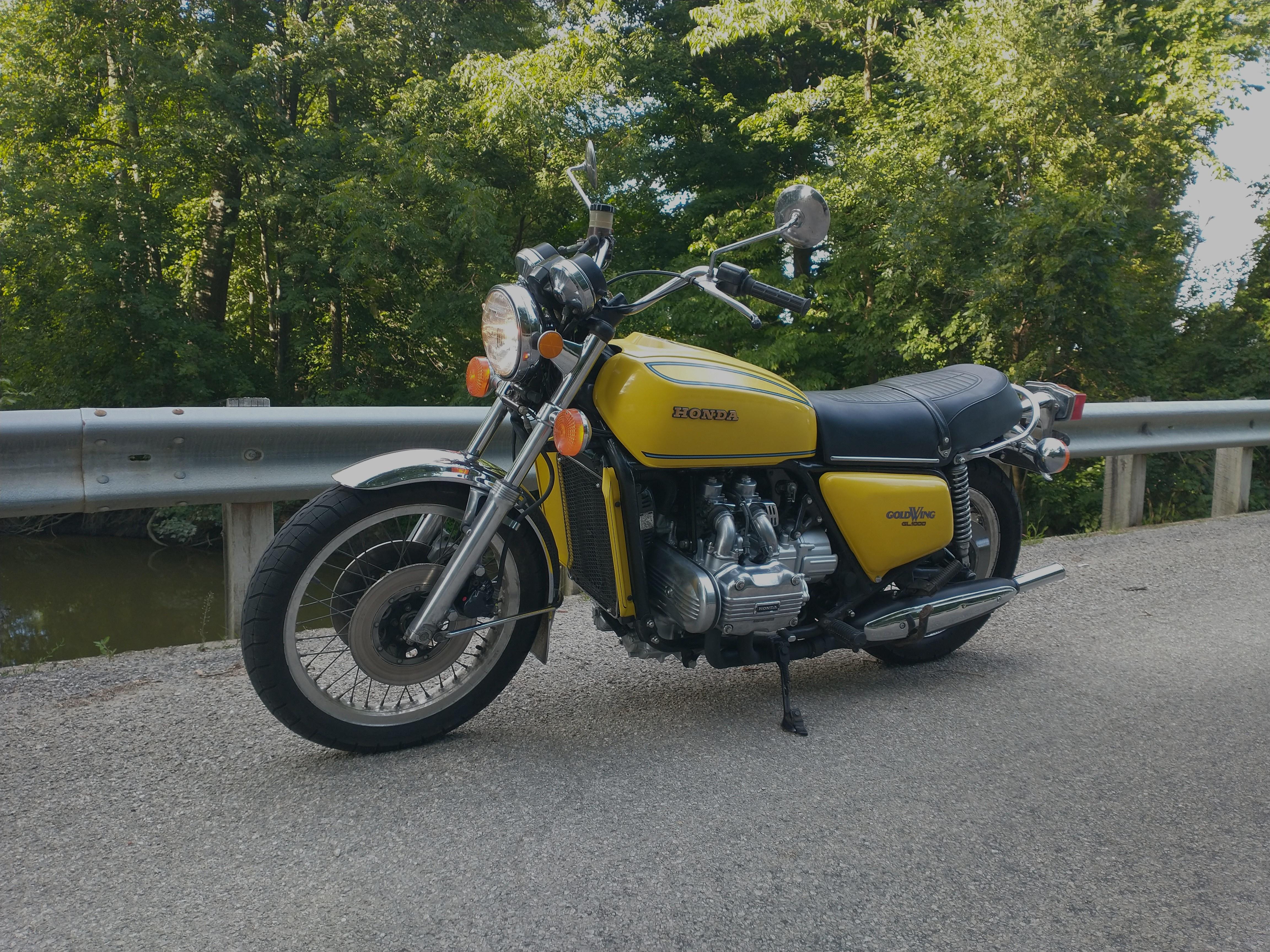 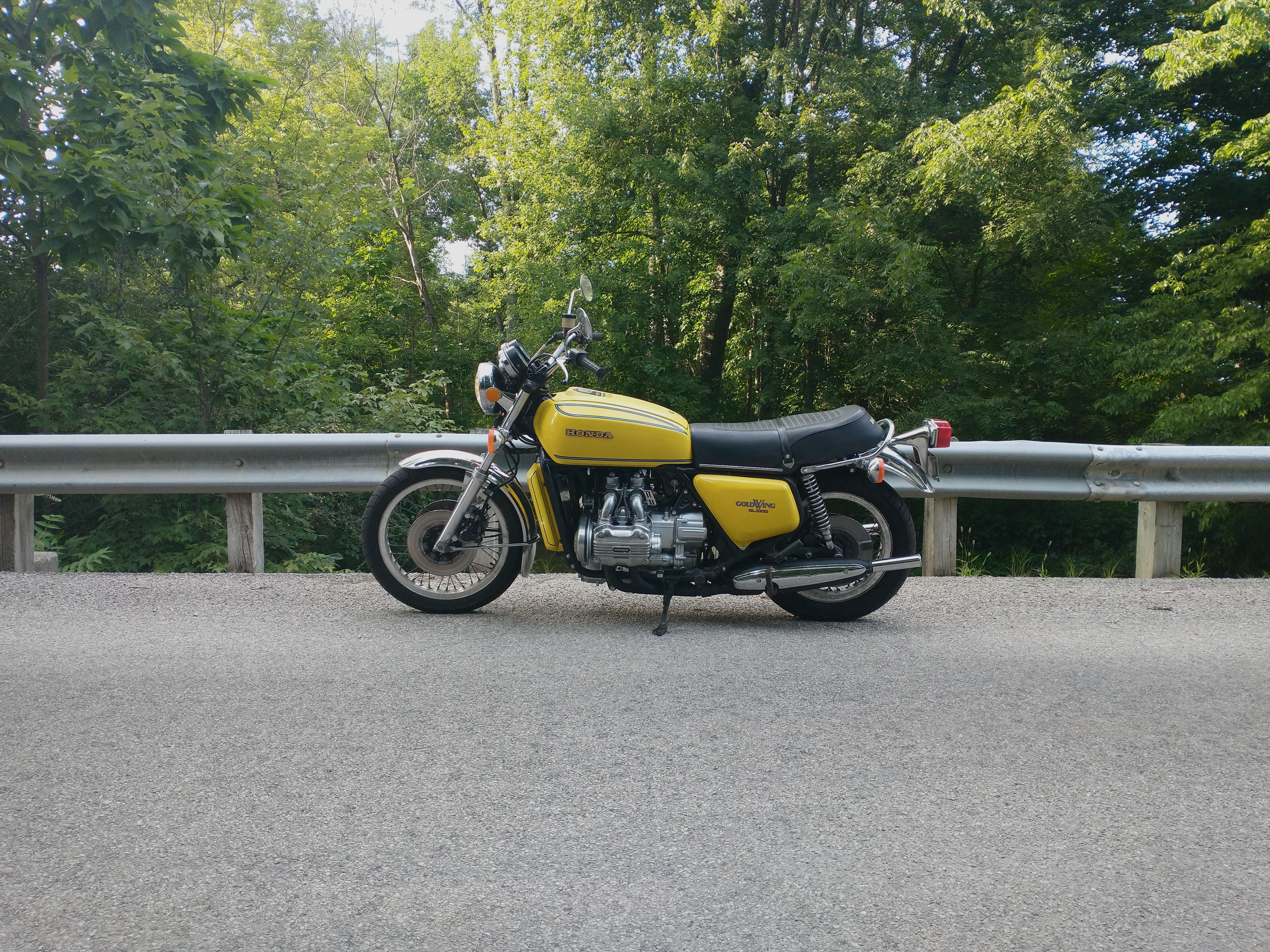 Idle was a bit rough early on, but seemed to even out once I got to operating temperature. More importantly, all the "crap" that was happening last time I had it out (dropping cylinders, lazy acceleration)? Gone. It runs nearly as well as it ever has.

The only downsides are extraneous stuff- I still feel like there's some air in the front brake lines (hopefully it works itself out), I'm getting some minor oil leaks around the valve covers (again, hopefully they work themselves out), and the handling seems a bit squirrley. Not sure if it's the steering head nut at the wrong torque or low tire pressure in the rear, but it doesn't feel as planted as it should. Oh well. I'll do some investigating. Or maybe I'll just ride the snot out of it. Probably both.
1997 Valkyrie- Light Cutomization, but Too Busy Riding
1980 KZ1300- Bike's Haunted
1976 GL1000 (Yellow)- It Runs (Poorly) and Doesn't Leak (Mostly)
1974 Velosolex 3800- Better Than Walking
1972 CB750- Broke the Chain And Ate the Motor
1969 CT90- The Most Fun You Can Have on 90ccs.
1965 CA77 Dream- Needs a Full Teardown, but Complete

Sync really is just at idle. Once you open the throttle at all it changes.

Have faith brother. We do.

I figured it was high time for a ride longer than "up and down the street", so after I got back from a day trip on the Valk I decided to at least get the yellow bike up to temperature. Around the block later, and flogged up to "the legal speed limit and no faster, honest, I promise", results are... really pretty great.

The idle feels low, but she revs up from it without any hesitation. High speed is good, mid-range is good, acceleration (fast and slow) is good- honestly, this may be the best the motor's ever ran. Handling still feels a touch loosey-goosey, but that may be because every ride I've done has been immediately after getting off the Valkyrie, so maybe it's just less refined by comparison.

Taping the front brake lever down for a couple days seems so have cleared the air from the front brake, but the rear feels like it's still got some air trapped. And despite changing the left rear cam seal, I'm still getting a leak from behind the points plate (Dyna technically for me, but whichever). It's not AS bad, and I may just ride to see if it clears up.

But you know what? Leaks I can deal with. I was worried about it running, and that part at least seems, well, golden. 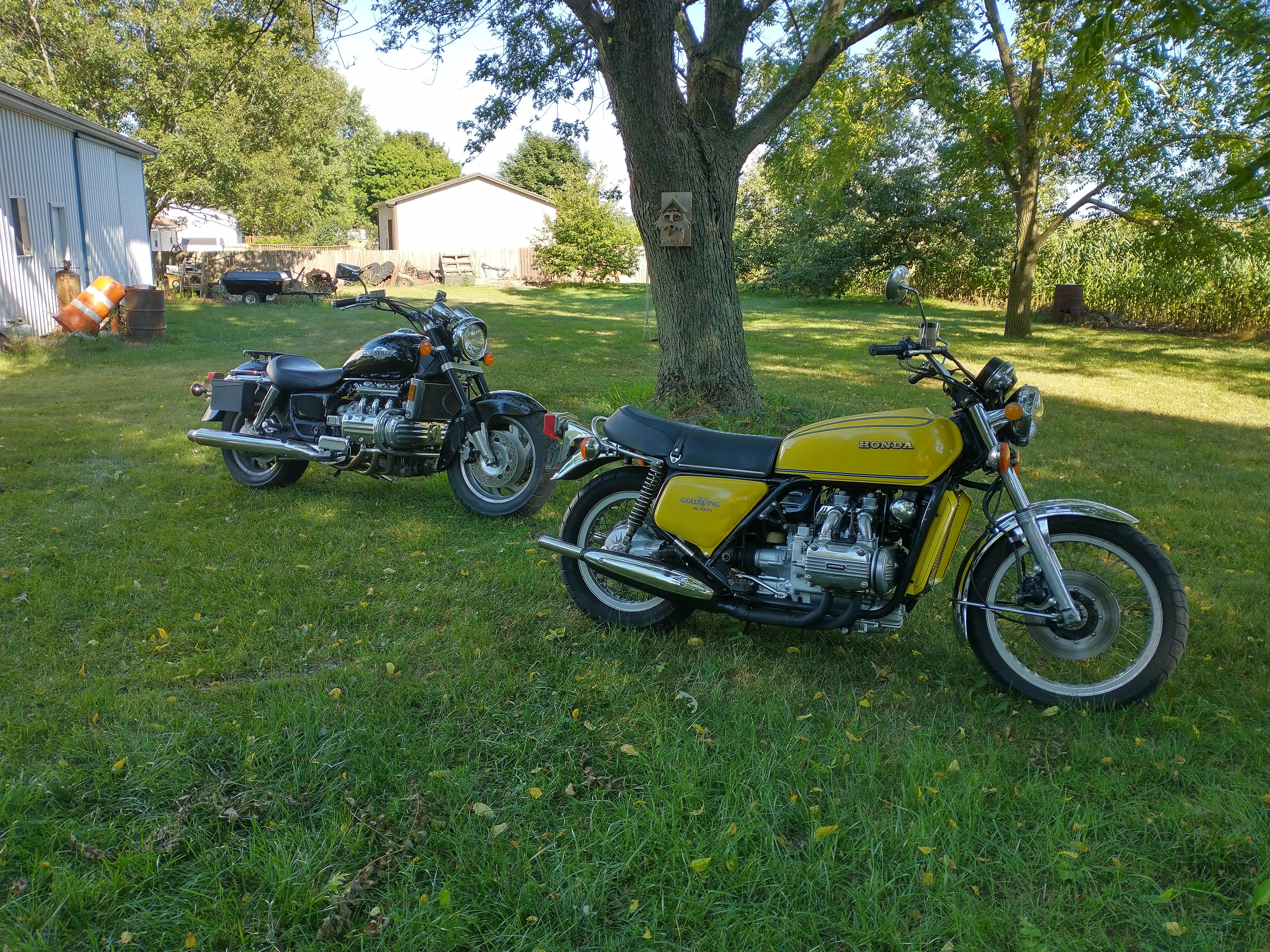 One of the scariest feelings is taking a bike apart, putting it back together, and accidentally fixing it correctly. 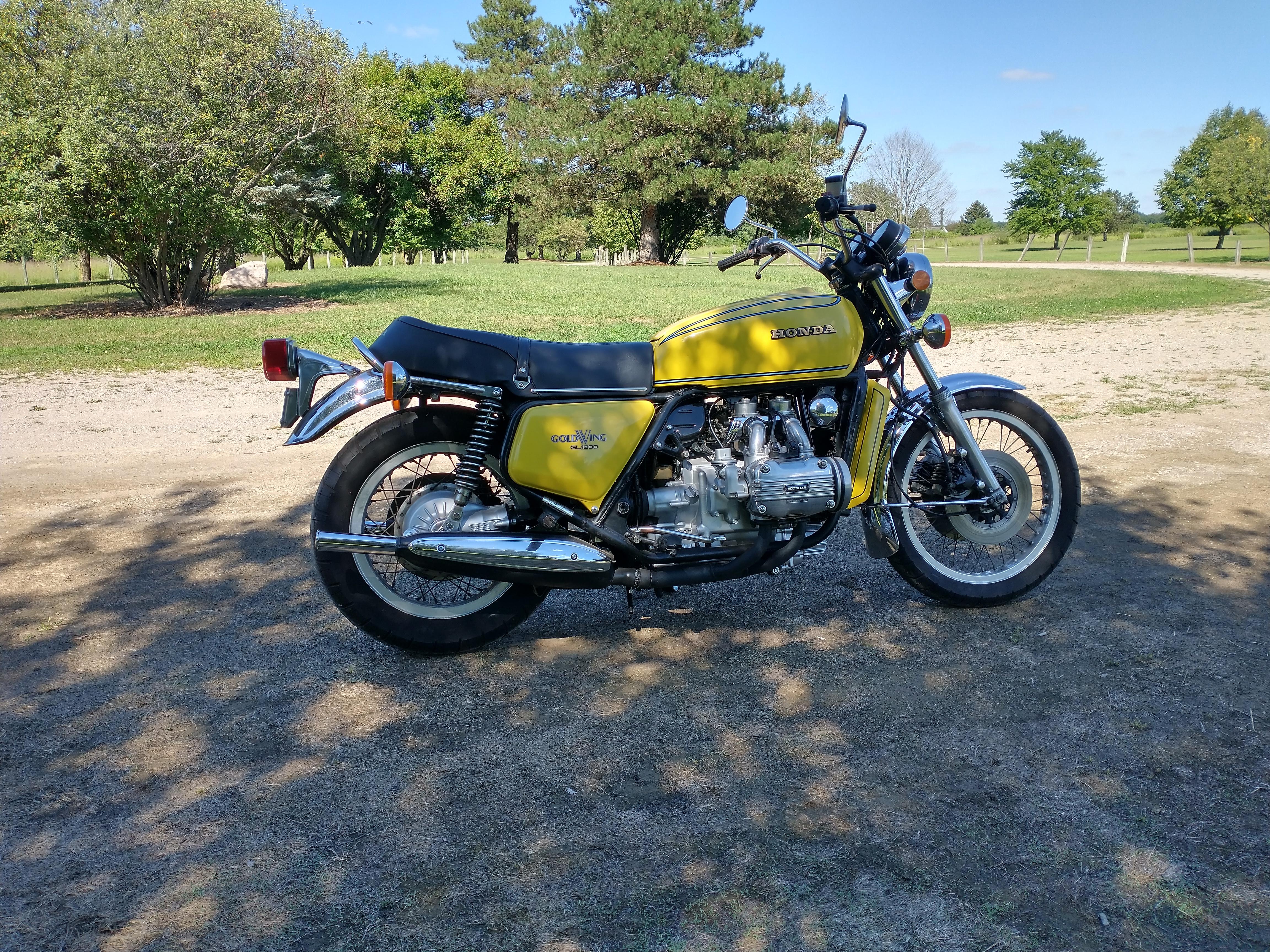 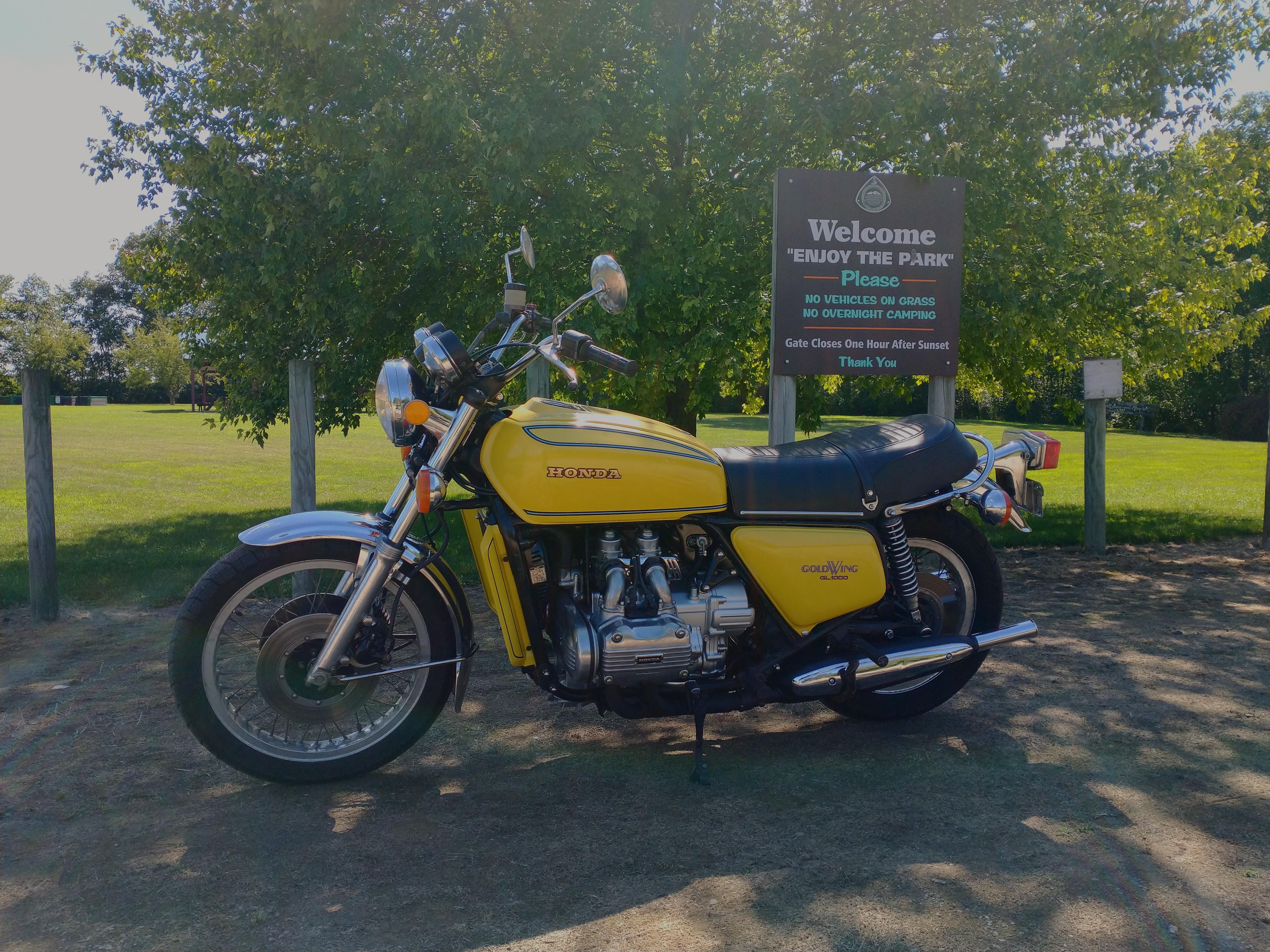 I figured it was high time to do something longer than "a lap around the block", so I did a decent mixed loop of about 30-40 miles. I've still got that annoying points cover leak, but I'm going to give a a couple heat cycles before getting real worried about it. Likewise I'm getting a bit of leakage on the rear of the other cam, be it tach drive, fuel pump gasket, or otherwise.

On the plus side? She runs great, she rides great, she stops great. Idle's nice and stable (which is good, because I was chasing a hanging idle when warm before I took everything apart), even at temperature- it acts like it KINDA wants to shoot up when the bike's really hot, but I can't really coax it into doing so, soooooo... overall win.

For the time being? I'm keeping an eye on the leaks, and would like to ride the snot out of her. 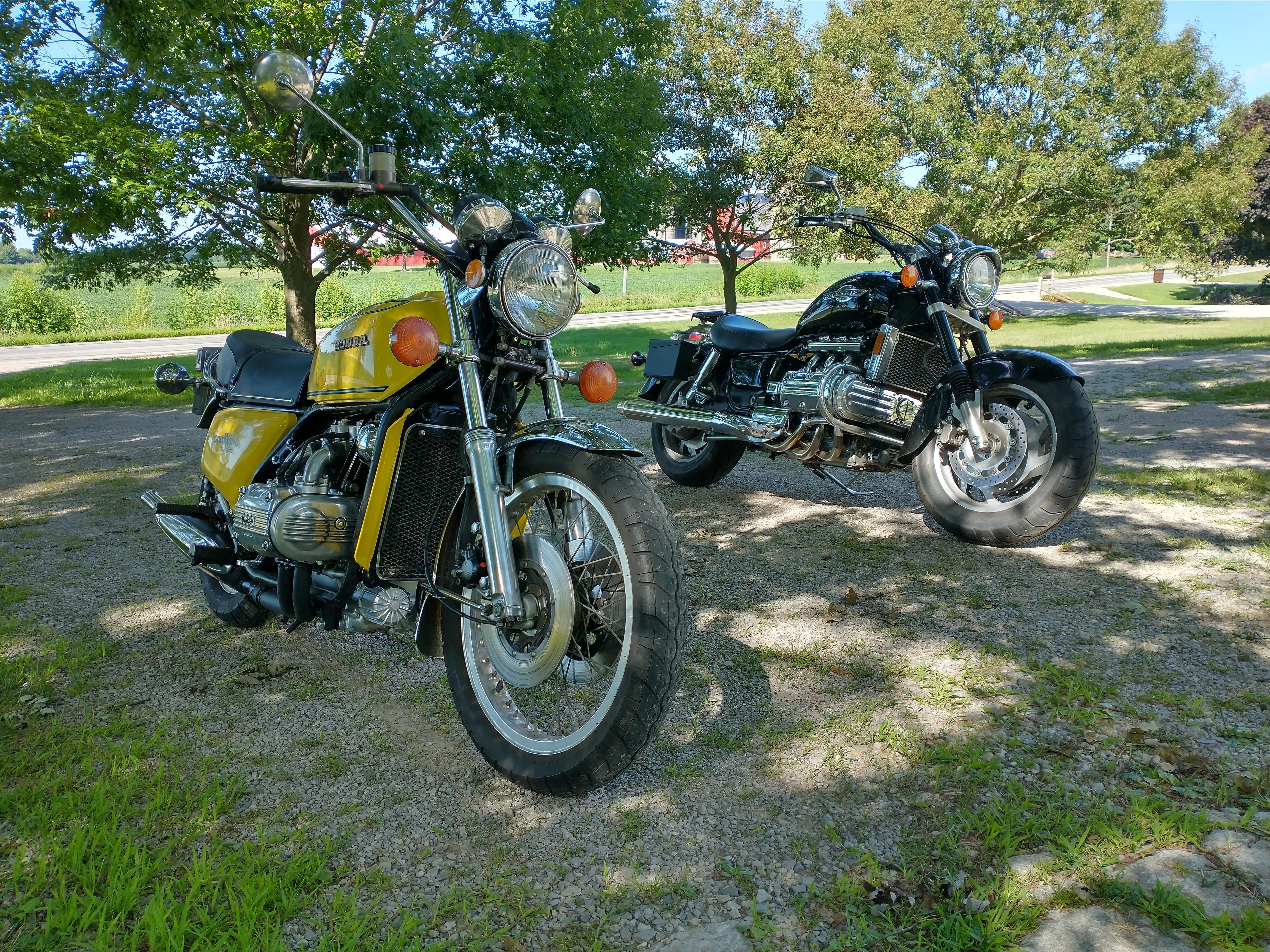 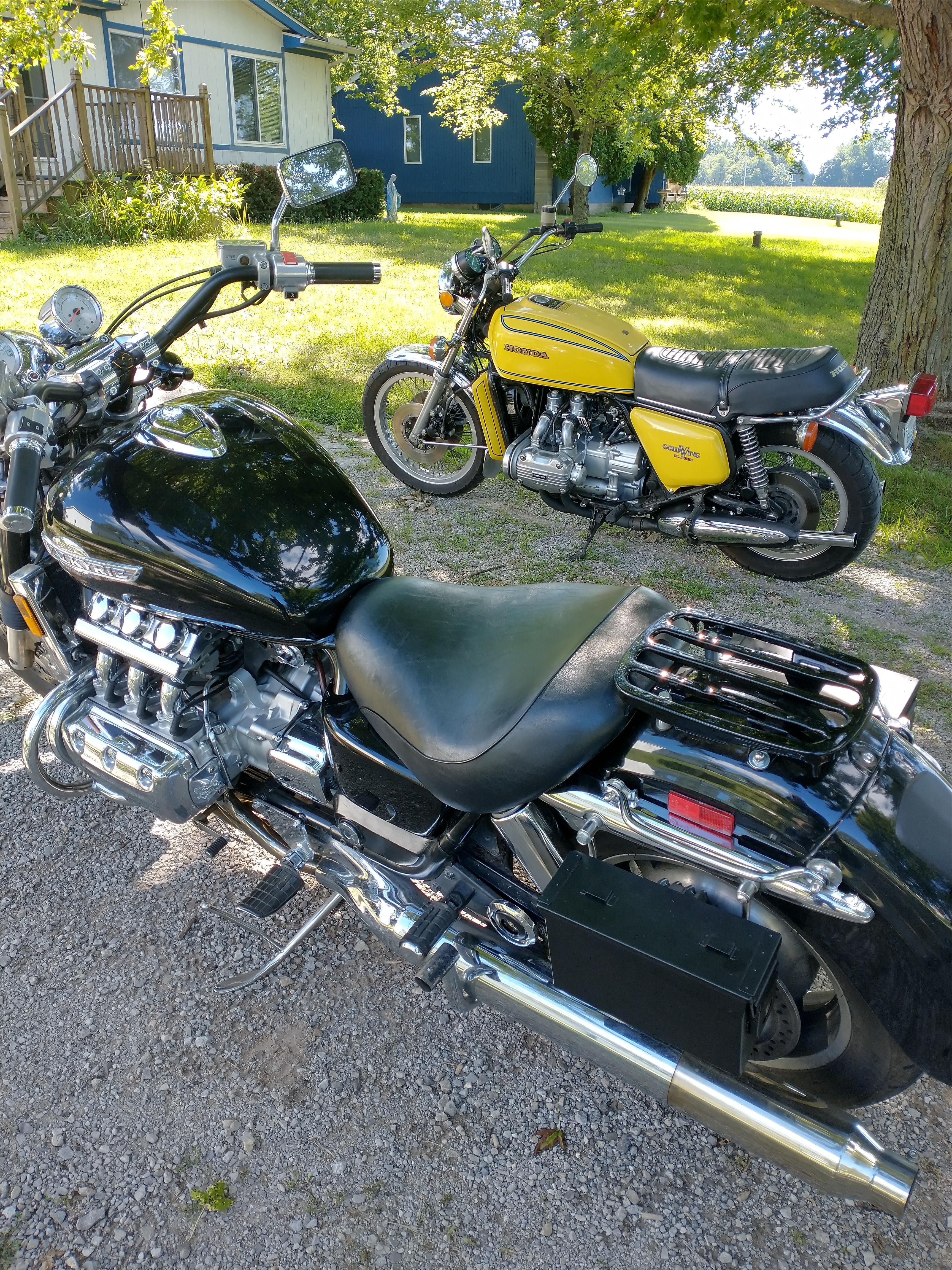 Still working on replacing those leaky seals (work's been crazy lately), but in the meantime I got some very insignificant, wouldn't notice they were there unless you were looking for them pieces in the mail today. Mainly, the brake pad inspection windows. 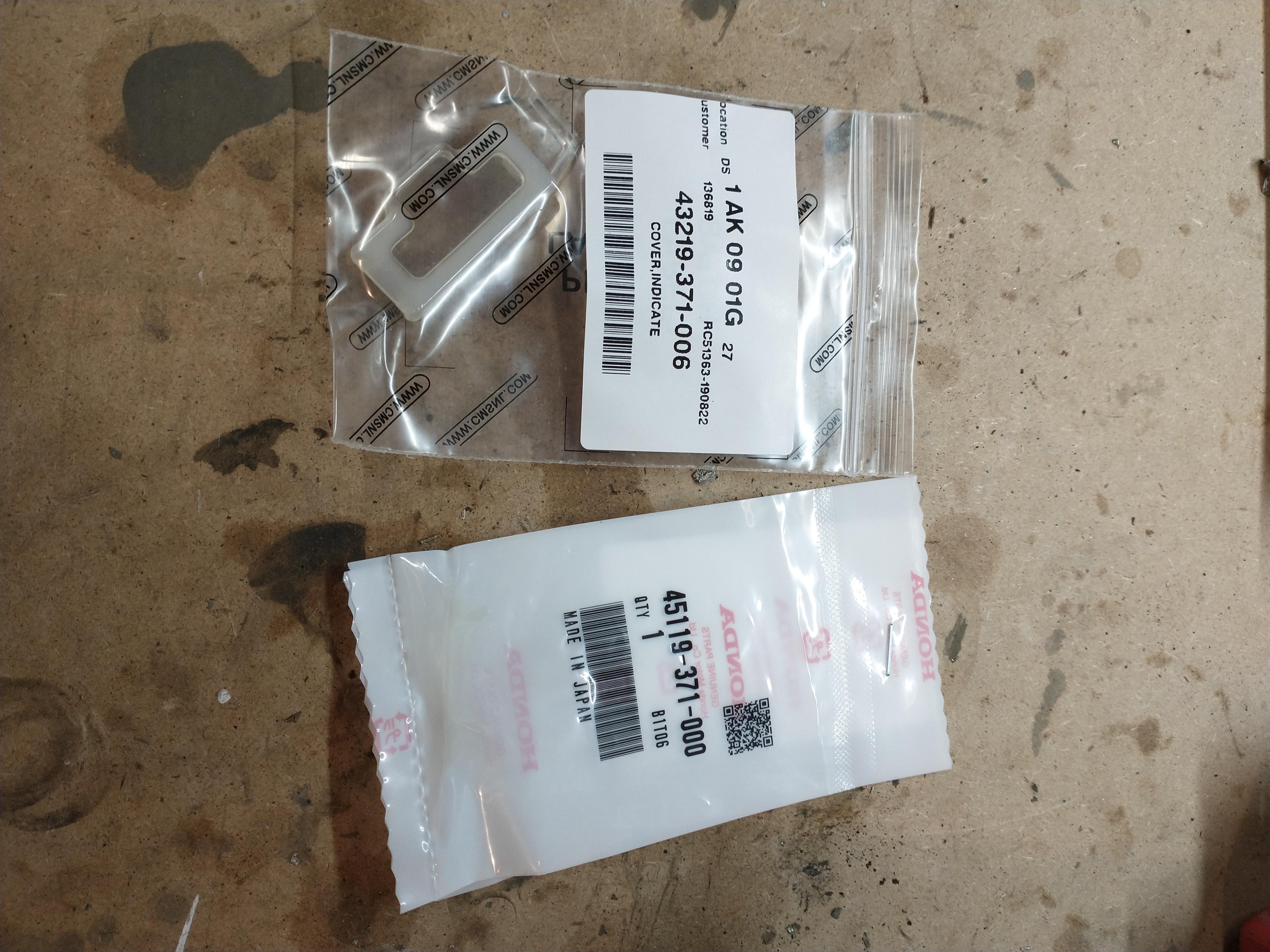 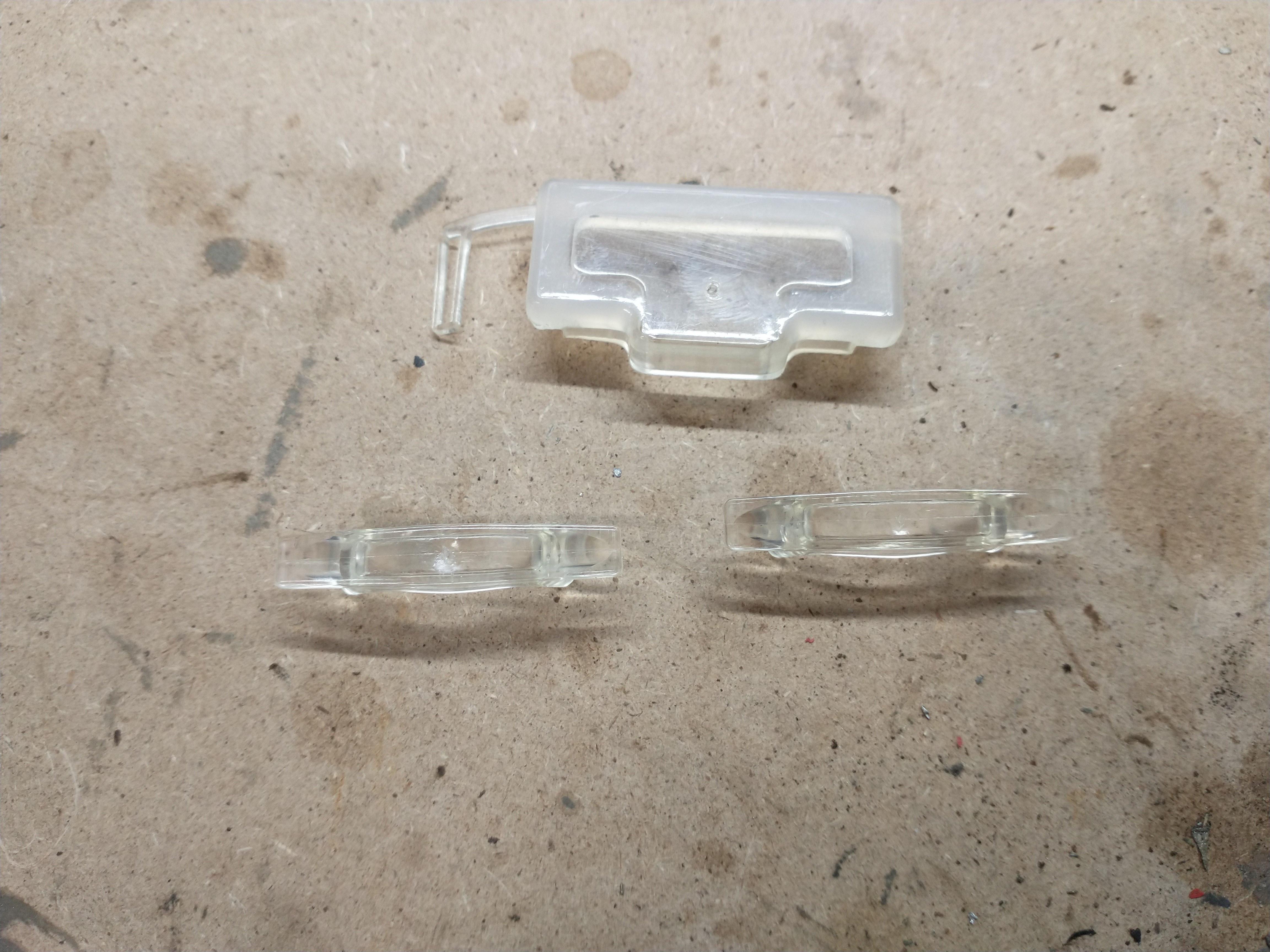 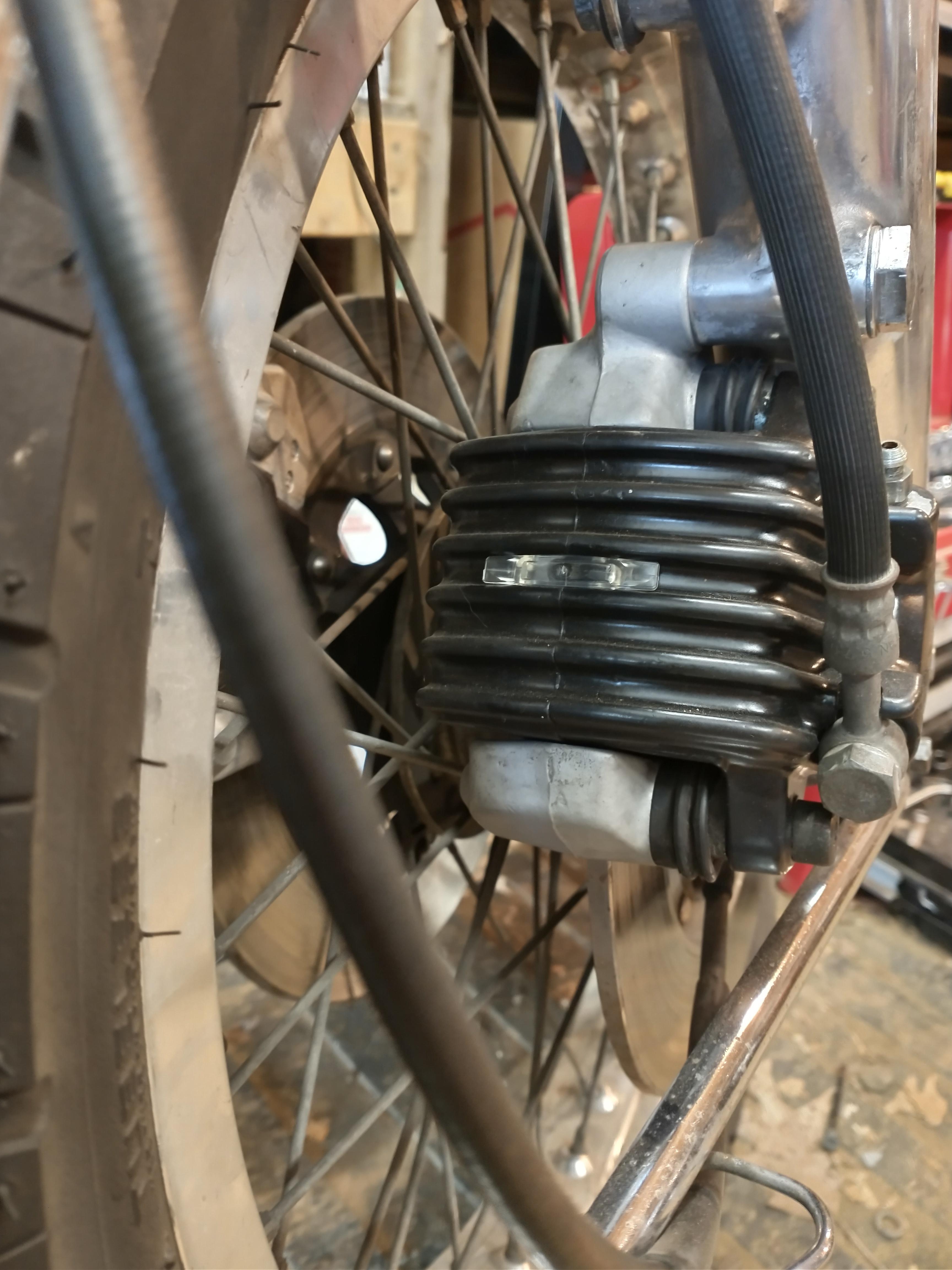 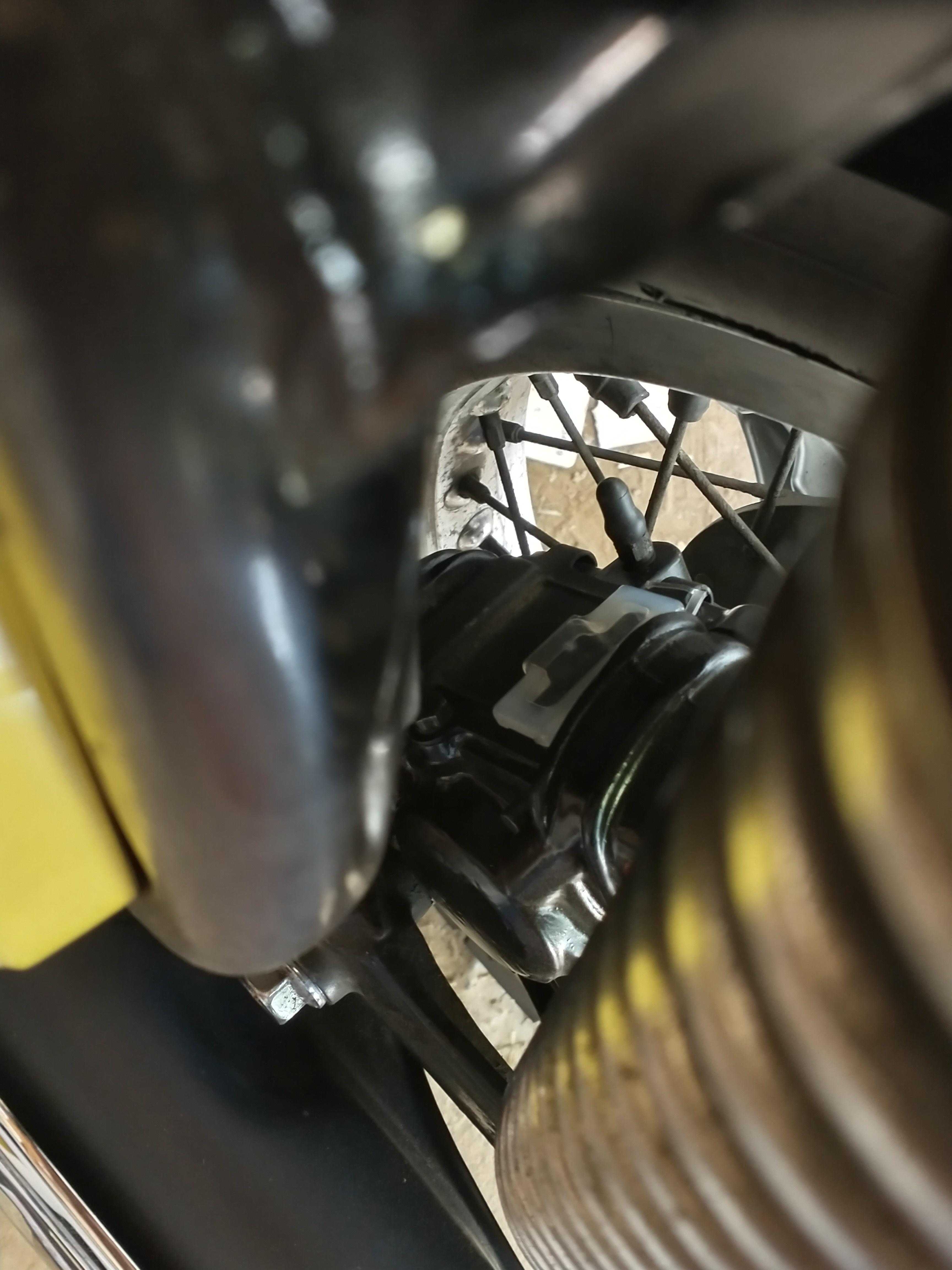 Was it worth it? For a daily rider- maybe not. For me? Totally. I LOVE little details like this. The stuff most people miss are to me the little quirks of these bikes that make me love them even more.

I am living proof that the universe has a sense of humor.

So, this bike has leaked oil like a sieve since I've owned it. I'm not 100% sure, but for the sake of a good story I'm going to assume that, after several years, I finally, FINALLY locked all of them down. These include:

A couple miles later, the engine is as clean as it's ever been.

Which must be why my radiator decided to let go. 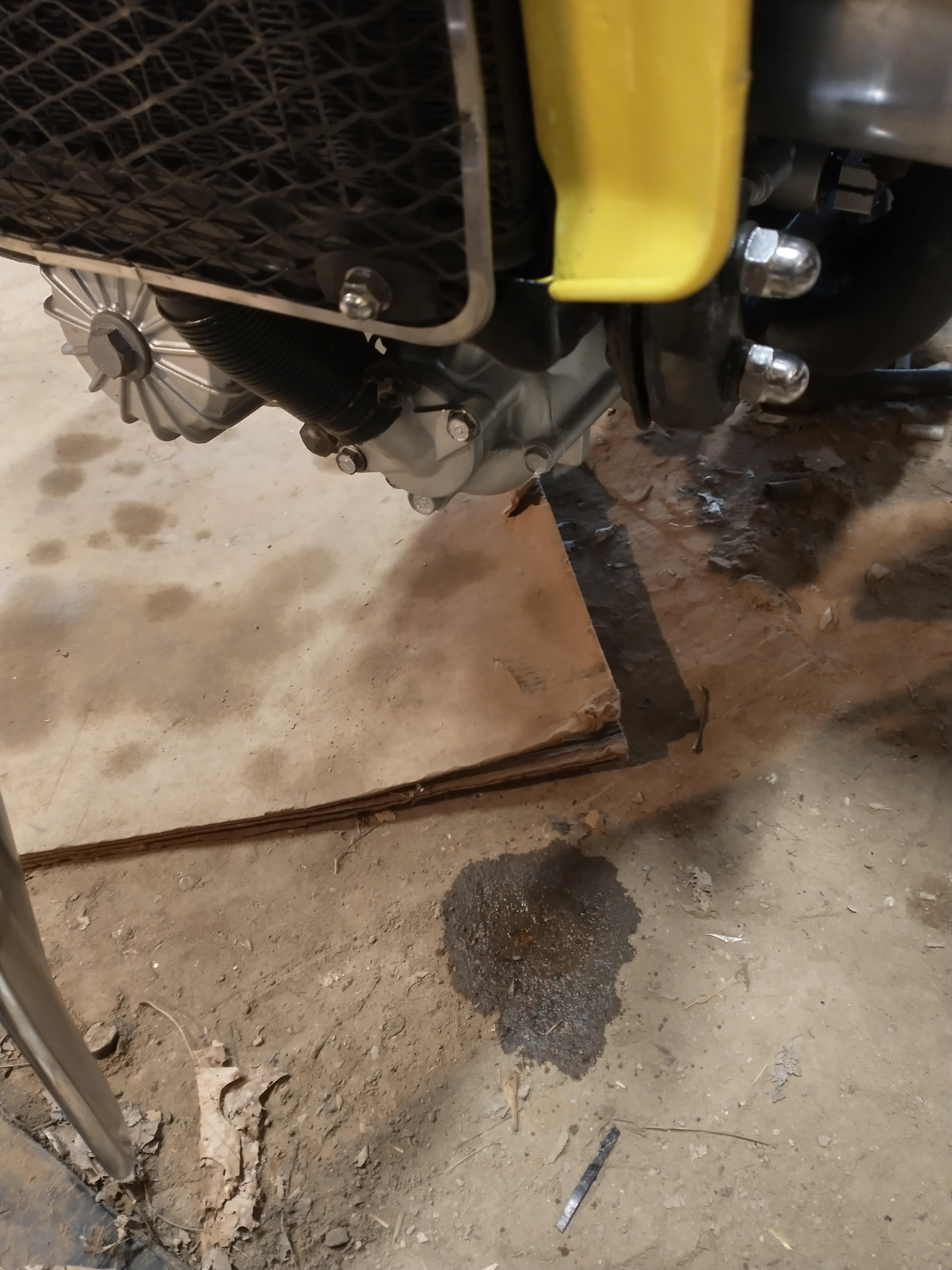 It's definitely not from the hoses (checked those- they're new anyway). I can only guess a hole popped up in the radiator itself. Coolant is dripping from the lower left mounting bolt, and (as you can see) rather vigorously too. This is definitely new as of today. Either way, looks like the radiator's coming out (again), either to be fixed or replaced.

All advice I give is only valid until an expert corrects me.
Top
Post Reply
213 posts