Patches and Hats for sale HERE

brilliant. you are to Goldwings as Charlie Sheen is to women. too many is never enough.

AussieGold wrote:brilliant. you are to Goldwings as Charie Sheen is to women. too many is never enough. 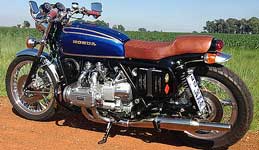 I never had a new one, but lusted after them for almost 40 years. Curious about two things: IBM selectrics--is that a hobby or is there still a market for them (threw one of the executive models in the dumpster a few years back!) Second--I am from south Texas where Pedro is a fairly common name but I wouldn't have expected to encounter one all the way down-under.
Bikes at present:
80 GL1100 Interstate: Now a Cafe Racer called DRAGON WING.
81 GL1100 freshly restored and up for sale BLACK BEAUTY
75 XL 250 just for fun
83 XL 600r with a 2004 XR650L engine in process
A fleet of parts bikes awaiting resuscitation or customization or abandonment

Well "Easter" the typewriter thing is that I grew up surrounded by typewriters as my father was a typewriter technician, I left school and did my apprenticeship with Olivetti on their typewriters, adding and accounting machines, after 5 years I went over to an IBM agent and worked on the Selectrics for 10 years until squeezed out by electronics. I just dabble in them to keep the brain cells working, there is very little demand for them as to overhaul one I spend about 80 to 100 hours on one machine, but they come out like brand new, parts are all from parts machines, the main drive hub are made of plastic and are all split, someone in the States is machining new ones up out of Aluninium but they are $100 each, plus the hours spent working on them makes them out of reach for most people.
I once had an Executive (Model "D") proportional spacing typewriters are quite rare now, I wish i still had that machine.

As for my name "Pedro!" well my name is actually Peter, but that is as common as muck around here and in the mining game we all have to carry radios, you call out "Peter" and you will get several Peter's answering, so I have had the nickname of Pedro! for about 20 years now, even still here in Telfer there is another Peter that uses Pedro as well, I am Little Pedro! as I am half his size.

When I picked up my new GoldWing in 1978 I was unhappy as I wanted the older model with only the fuel on the tank and wire wheels, everyone laughed at the Comstar wheels as they looked cheap and nasty, but she grew on me, but then she would not tow my caravan and I was silly enough to get rid of her.
Pedrotq ~ (Pedro The Questionable)

Thanks Pedro. Interesting story. I can imagine that there is not much market for typewriter repair techs, on the other hand if you really need one where could you go? We are already to the point that most young people have never used one, much less repaired one. As for " "Peter" my son-in-law has a brother in Australia named Peter as well.
Bikes at present:
80 GL1100 Interstate: Now a Cafe Racer called DRAGON WING.
81 GL1100 freshly restored and up for sale BLACK BEAUTY
75 XL 250 just for fun
83 XL 600r with a 2004 XR650L engine in process
A fleet of parts bikes awaiting resuscitation or customization or abandonment

well another week off has come and gone, it was very short for me and I achieved very little. I had to do a forklift course as the ticket I had was not recognized anymore as it was over 20 years old, so that took care of Wednesday. My sister got the keys to her new house on Thursday so I gave her a hand with my tray back ute and trailer, that took care of another three days, but I also had Sunday off to play with my toys and old girls.

I recall many years ago how much dificulty I had setting up my sidecar outfit, every time you wanted to experiment, fit a new profile tyre or mess with the front end all the adjustments were out, she handled like a run over lawnmower, the brackets welded onto my bike frame were to rigid to allow much adjustment.

So I have been thinking about what I am going to do about it as now is the time to make changes to my original plan, and the best time to "Sit & Think" is when you are relaxing in the toilet, not much else to do anyway.

I decided to make some kind of "Universal Joint" type fitting to allow easy but rigid movement for each "Strut", "Link", "Arm" or whatever they are called. I run out of time but here is what I have achieved.
You do not have the required permissions to view the files attached to this post.
Pedrotq ~ (Pedro The Questionable)

And so the story continues.
You do not have the required permissions to view the files attached to this post.
Pedrotq ~ (Pedro The Questionable)

And keeps continuing.
You do not have the required permissions to view the files attached to this post.
Pedrotq ~ (Pedro The Questionable)

Now for the so called "Universal Joint" fittings. I am not sure if this will even work, as it may be too wobbly? I will let you all know of my success or failure with this idea.

I need to make four of them, one for each Strut.
You do not have the required permissions to view the files attached to this post.
Pedrotq ~ (Pedro The Questionable)

"Universal Joint" continued
You do not have the required permissions to view the files attached to this post.
Pedrotq ~ (Pedro The Questionable)

Fun watching, thanks for posting!
I found the end of the internet

Well that it as I run out of time, I still have another rod to machine down so as I have four fittings.

A heap of goodies (bearing shells etc) arrived the other day from Wingovations so soon I will be starting to assemble my real machines, but there are still many more bits to acquire. This is all fun for me at the moment, I just hope I still have the skills to ride these beasts.

All the best for now

How to characterize this thread in my mind...??? Wingipedia? Love all the pictures and order and mechanical intelligence. Thanks for sharing.
Faith, Family and Friends
'75 GL1000 (Feb 2012 BOTM)
2014 Softail Deluxe
1966 Suzuki S 32-2 Olympian

The craftsman is proud of what he has made, and cherishes it, while the consumer discards things that are perfectly serviceable in his restless pursuit of the new." Richard Sennett as quoted by Matthew B. Crawford in Shop Class as Soulcraft