I've been a bit heartbroken since selling my 82' Standard Goldwing that I had gotten back on the road last year. So, when I found someone online that was selling a '76 GL1000 project bike a few hours away, I had to go see it.

The bike was located on the west coast of Florida (I live on the east coast) and it was a bit of a drive today to go see this bike. The current (now previous) owner was a really nice guy named Gary who had amassed quite a lot of projects in the past 40 years in his large garage. He was getting ready to move to Georgia and looking to sell this project bike that he had never gotten to.

I ended up purchasing the '76 along with a '79 parts bike for $400. Unfortunately (or fortunately?) the '76 has had its engine removed and the engine is broken down into about 12 boxes. I'm not sure why the engine was originally removed from the engine, but it appears to have been done about 30 years ago. Hopefully, all or most of the parts are in these boxes, I'll have to spend some time inventorying what I have in the next few weeks. I did see a set of new engine gaskets in one of the boxes, so I'm hoping that means that whatever damage that originally warranted the engine removal has been fixed (this may be wishful thinking).

The history of this bike is definitely interesting to me, the guy I bought it from had owned it since around 2008 or so, he had purchased it from a friend of his that someone ended up with it.

All of the engine parts have been meticulously wrapped in newspapers and stored in totes and boxes. The newspapers date back to 1992 and some of the boxes have dates from 1991 on them. It's exciting to think that these parts have been wrapped for 30 years waiting for someone to finish the project.

I'll attach a couple of pictures here if anybody is interested. I apologize in advance for them being dark, I didn't think to take pictures during the day and my garage isn't well lit.

If there is interest, I'll also document the process as I'm sure there will be a lot of challenges and lessons learned to document. I plan on keeping the bike as original as possible and really looking forward to getting a deep dive into all of the systems on the bike. I'm also very excited about this project and glad to now be a part of the GL1000 club!

I'm clearly going to need to clean up my garage a bit before I can dig into this project... 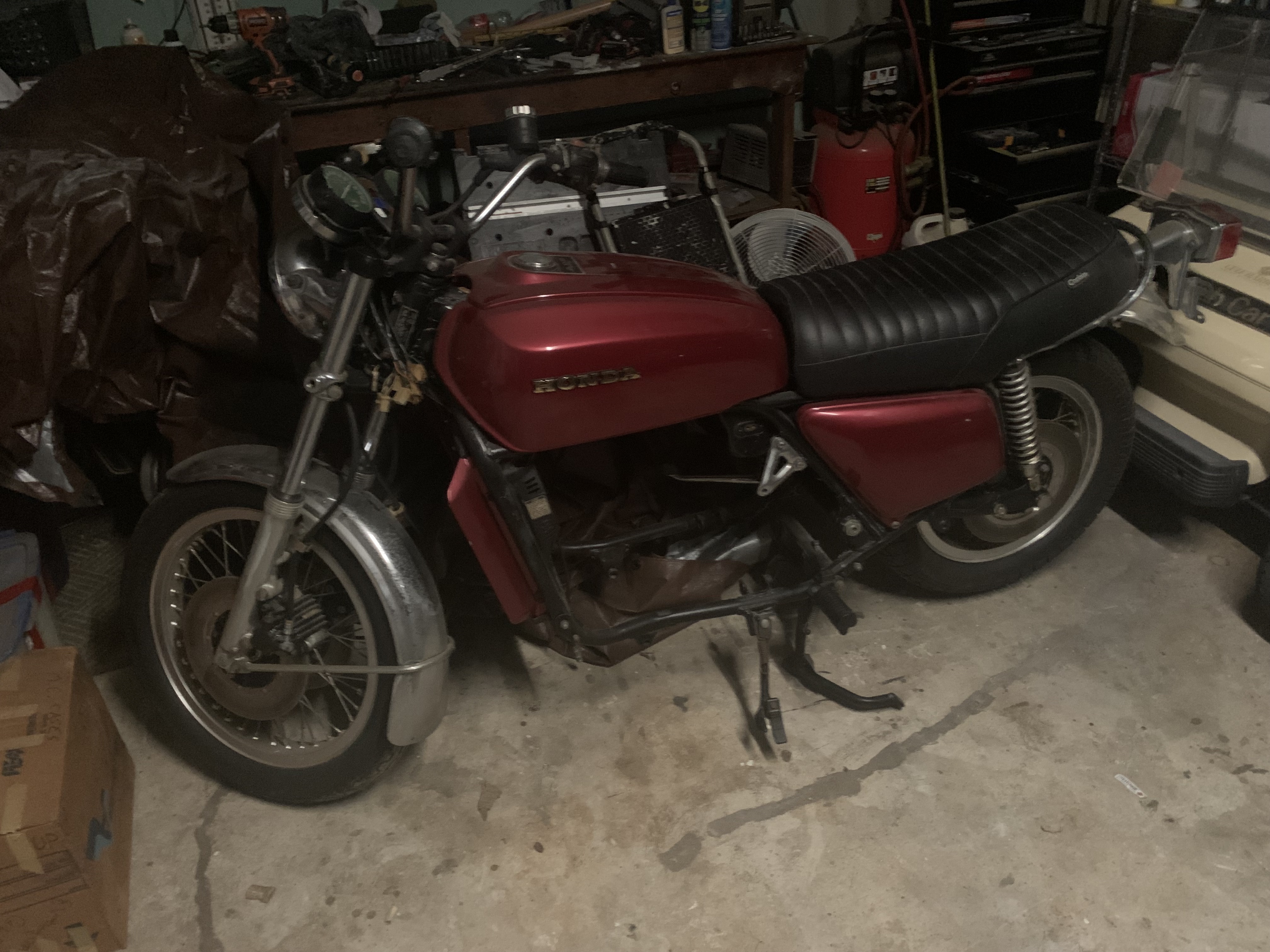 A peek of the many boxes that the motor is stored in (the cardboard boxes and totes they are on top of)... 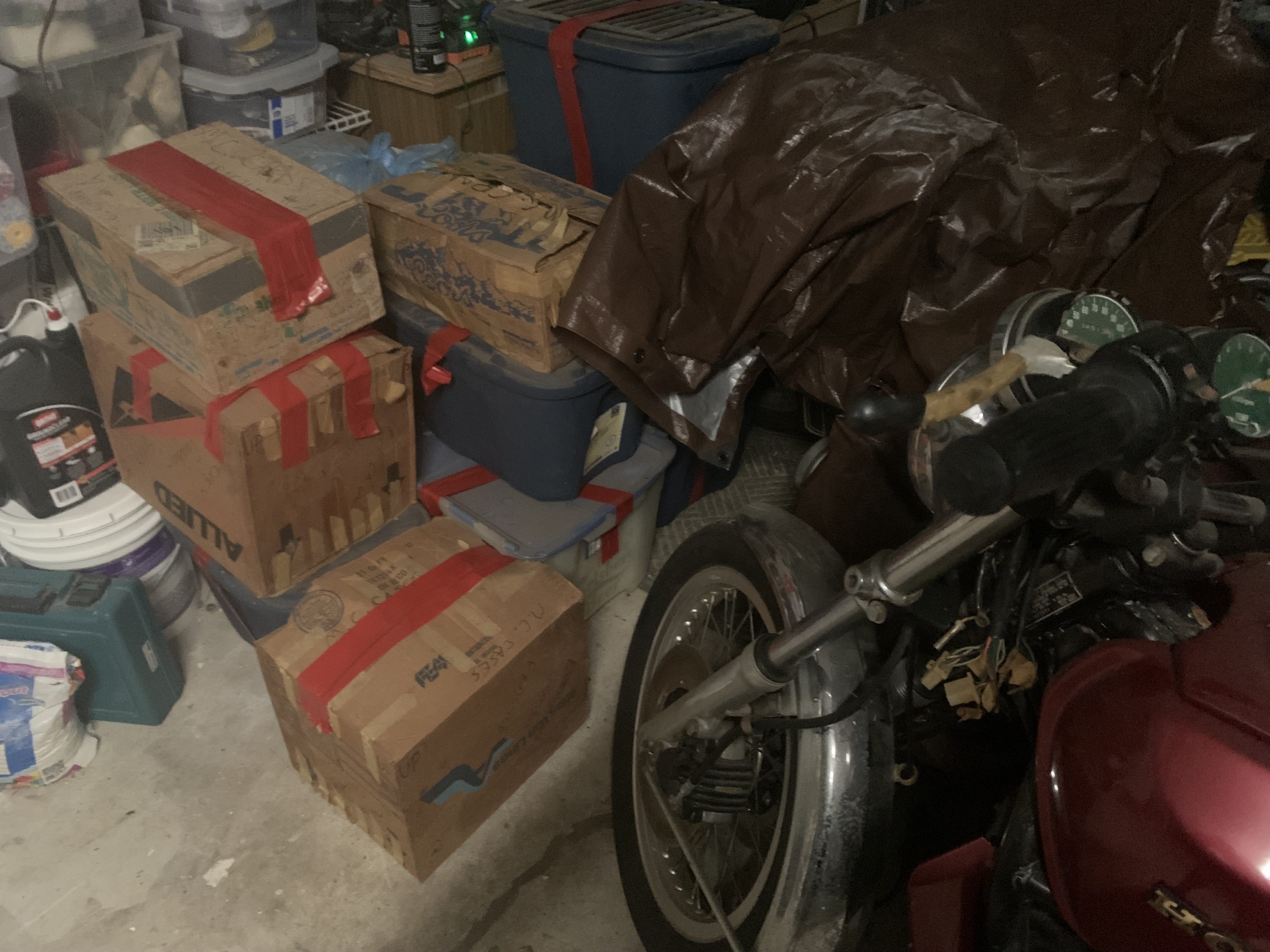 Welcome to the fold, but man, I don't know. Although things are changing, there are still quite a lot of GL1000s floating around out there being sold for peanuts with good motors. Motors are still easy to find on ebay and elsewhere as well. If you get satisfaction from ground up resurrections, by all means, build the motor - keeping in mind that bearings appear to be tough to find.

My time is valuable and if it were me and I had a candidate recipient that looks as nice as that '76, I'd source a complete motor, swap it in and be nearly ready for prime time in a fraction of the time, much less aggravation, and cheaper in the end. Then sell the motor parts!

@desertrefugee - all good points! I’ll really need to consider all options once I’ve unboxed and inventoried all parts.

The ‘79 parts bike that was included does have a motor, however I’m not sure about it’s condition. If that engine turns out to be in good shape then that would certainly be a good option.

No doubt the easier route is to find a good candidate motor, but there is something intriguing to me about putting the engine back together and gaining that level of knowledge.
Dave
1982 Standard GL1100 - SOLD
1976 GL1000 Project Bike
2007 GL1800 Daily Rider
Top

Adding to desertrefugee’s idea, if you have the time, and all the parts, putting the engine back together would be a fun project. If you happen to be missing some hard to get parts, I would strongly consider a 1200 swap on that one!
2002 1800 Wing
2001 Valkyrie Interstate
1978 1200 EFI Wing with Motorvation Coupe Royale sidecar
1977 1200 Wing cafe/bobber project
1974 Suzuki GT550
Top

Lots of good info in ShopTalk

wingrider wrote: ↑Tue Aug 31, 2021 10:10 am Adding to desertrefugee’s idea, if you have the time, and all the parts, putting the engine back together would be a fun project. If you happen to be missing some hard to get parts, I would strongly consider a 1200 swap on that one!

Lots of good info in ShopTalk

wingrider wrote: ↑Tue Aug 31, 2021 10:10 am Adding to desertrefugee’s idea, if you have the time, and all the parts, putting the engine back together would be a fun project. If you happen to be missing some hard to get parts, I would strongly consider a 1200 swap on that one!

Yes and no.
Yes, the mounting points are identical. You may have to gently 'clearance' the frame at the top of the alternator cover and the right hand belt cover is best put on after the engine is in.
No. The 1200 final output shaft has to be swapped for the 1000 shaft. Not a problem, it slides right in. You will have some wiring to do for the ignition circuits. I'm not sure from memory but I think the 1200 uses a combined reg/rec so some wiring work there too. You would need the 1200 carbs.
If your 1200 is 84, the biggest problem is frame clearance at the vacuum canister. There's no alternative (that I know) to cutting the offending frame and reshaping it. 85-87 engines don't have that problem.
EFi 1200 engines will not go in unless carbs are used and the bigger rear cover, stator and alternator rotor are changed for the standard versions.
You also need to run the hydraulic clutch line and master cylinder.
"Impossible Is Just a Level of Difficulty!..."
If I'd wanted you to understand, I would have explained it better! (Johann Cruyff)
I’d give my right arm to be ambidextrous!

@Old Fogey - thanks for the detailed response!

This is definitely an option if things don't pan out. However, at this point, I do want to try and keep the bike as original as possible. It may be a bit silly but that seems to me like the best way to honor whoever packed these parts away so carefully nearly 30 years ago.

Thanks for the advice!

My plan to start is to start going through the parts bike later this week to see what parts are salvageable and useful. I also plan on pulling the motor from the parts bike and opening it up to check the condition and familiarize myself with the motor. There is a great series of videos on youtube showing this motor being put back together, doesn't look overly complicated.
Dave
1982 Standard GL1100 - SOLD
1976 GL1000 Project Bike
2007 GL1800 Daily Rider
Top

Well, I learn something new, not much experience with 1200s. Looking at the different part fiches, it looks like simply changing the 62/28 bearing for a 6205 (62/25) will allow the 1000 output shaft to fit. MAYBE, PERHAPS, ETC!!
"Impossible Is Just a Level of Difficulty!..."
If I'd wanted you to understand, I would have explained it better! (Johann Cruyff)
I’d give my right arm to be ambidextrous!

That is interesting! In my case, I happened to have found a guy that does machining locally, so I just had the shaft altered to accept a circlip. If the bearing comes out easy, then perhaps it is a fix to the 87’s issue.
2002 1800 Wing
2001 Valkyrie Interstate
1978 1200 EFI Wing with Motorvation Coupe Royale sidecar
1977 1200 Wing cafe/bobber project
1974 Suzuki GT550
Top
Post Reply
34 posts