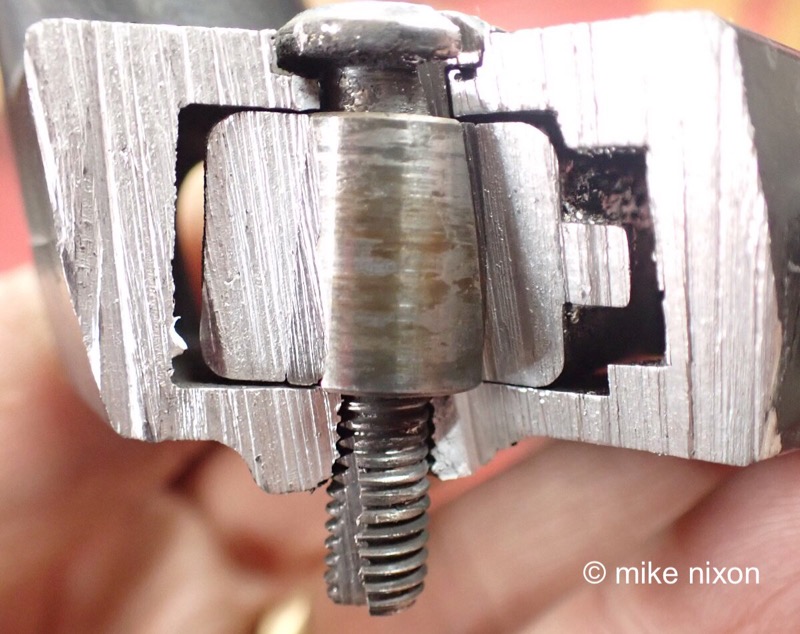 This picture is of a cutaway clutch lever bracket and its lever. You guys ever have the problem of your clutch lever seizing onto its pivot bolt? This eventually tears up the lever "perch" as the bolt then rotates each time the lever is used, quickly wallowing out the perch and making use of the clutch -- and therefore riding the bike -- unsafe, not to mention distracting and unpleasant. The clutch lever design which began on the GL1100 is extremely prone to this problem. The design also carries over to several other models, and these too routinely seize their levers.

Two interesting situations emphasize the scope of this issue. First, the backstock of new OEM replacement levers has all but dried up. Saving the expensive dusty NOS part on Ebay, David Silver or CMSNL, they're pretty much gone. Second, even used levers are a problem. Most of them are seized to their pivot bolts as well (two in a row I bought recently were as bad or worse than the one I was replacing). And as for aftermarket, all I have seen have design issues. As with so much on the aftermarket, the critical dimensions of these Chinese-made parts are all off. From the tang that operates the clutch switch, to the bump that pushes the brake cylinder piston, to the thickness of the pivot boss, it's a whole different part than the original. There may not even be a bushing in the pivot! (Really? Aluminum directly on the pivot bolt?)

To avoid the seizing-lever syndrome, take these three precautions. First, stay away from high-pressure do-it-yourself car washes. This is a given for good maintenance anyway. Pressure washing forces water into places on your bike it would never otherwise go (including the clutch lever pivot), and the soap in the coin-vended facilities is usually very high alkaline and thus attacks almost all of the metal on your bike, even the wiring. Second, regularly remove and re-grease the pivot bushing and pivot bolt. And third, when reinstalling the lever, tighten the bolt gently, then back it off 1/8 turn before installing and tightening the locknut. This gives room for the grease to ooze around the pivot and minimizes unlubed spots.
Mike Nixon
www.motorcycleproject.com
https://www.motorcycleproject.com/text/ ... _carb.html
https://youtu.be/CDnzwDWhN24
https://www.motorcycleproject.com/text/lies_ether.html
Top

when ever I remove a fastener on my vehicles I put anti seize on it...like Mikes Red Hot sauce ..I put that s**t on everything.