by Lucien Harpress
Overall, I'd say the bike as-is is about 85% done. Bump that up to 90% once I get the rear rack sorted. Things that "matter" (engine, suspension, geometry, etc.) are being left alone for the most part, because I agree, this bike is fantastic without any mods whatsoever. What's left is mostly cosmetic, and 100% personal taste.

The "vision" has always been pretty much the same- what if one of THESE: 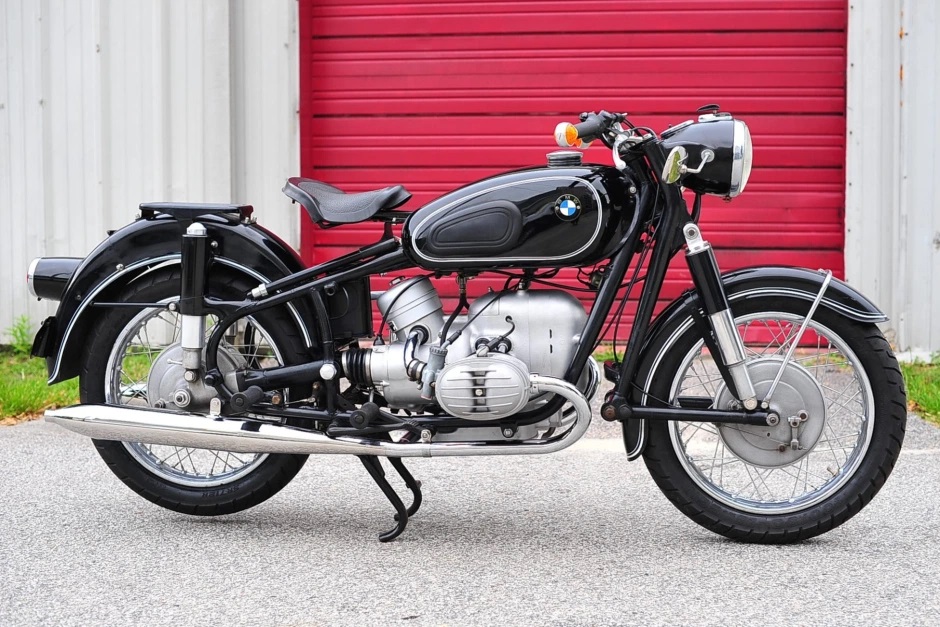 ...got bumped up with water cooling and 4 more cylinders? Most of my design decisions start there, and then get modified if necessary depending on how the Valkyrie is actually laid out.

For example, the gauges- the chrome-pod-spread-out gauges of the stock Valk are... not great. They work, but I hate the way they look. Ideally I'd get away with a gauge-in-the-headlight-bucket sorta thing, but the angle of gauges to make them visible and the space on the triple tree makes this unfeasable. It's probably going to be something like a plain black headlight bucket scooched forward, while the gauges are brought together and angled up just a touch. I'm still playing with details.

And yes, this means at some point I'm going to be experimenting with a cantilevered solo seat. But that brings me to point 2 of my design process- I'm willing to scrap anything in a heartbeat if it's not working. So when I say "we'll see", it's not just hyperbole.

dontwantapickle wrote: ↑Sat May 15, 2021 11:31 am Suggestion:
you could just remove the turn signals, the fenders, chop off the exhaust, and call it a "bobber".
(paint it flat black for that truly extra custom look)

dontwantapickle wrote: ↑Sat May 15, 2021 11:31 am Suggestion:
you could just remove the turn signals, the fenders, chop off the exhaust, and call it a "bobber".
(paint it flat black for that truly extra custom look)

by Lucien Harpress
Not a whole lot of movement on my end as far as customizing goes- more riding, less wrenching. Still, I'm gathering parts for the future. I still need to figure out the mount and the housing, but I think I've got my replacement brake light figured out... 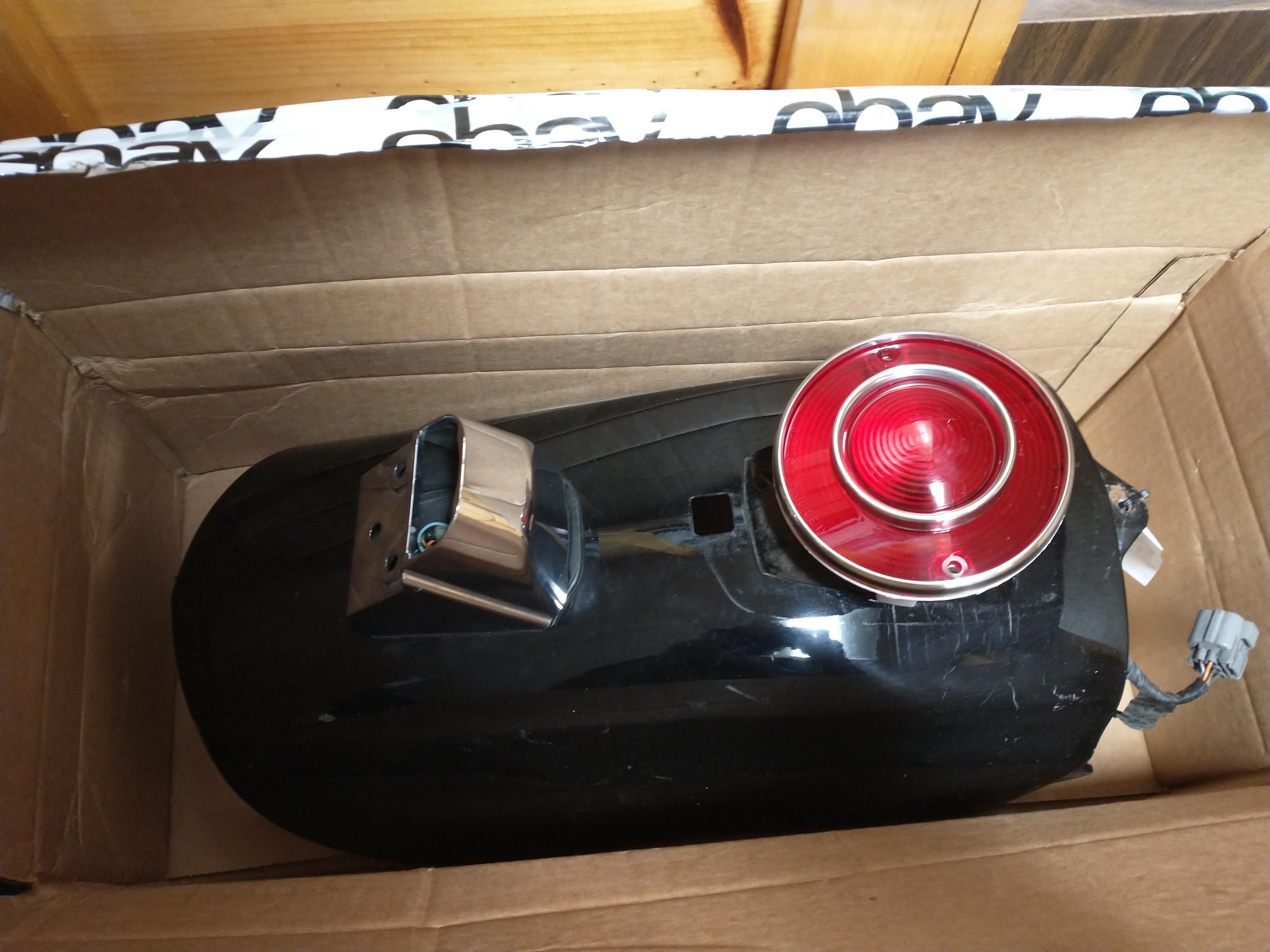 (My future sister-in-law has one, so it was simple to get some measurements off it. About a 5 inch diameter, and far as I can tell, will cover all of the stock opening in the rear fender.)

by Lucien Harpress
I'm still gathering parts to customize some of the larger areas, specifically in this case the headlight. I'm looking to replace the stock bucket and rim (which is too flat and has that "visor" on the ring that's way too indecisive) with a more "basic" bullet-shaped housing. Problem is, the Valkyrie is so large a standard 7" replacement headlight looks comically small between the front forks. I've had to branch out to looking at car headlights, and I think I may have sorted it.

Via a headlight and bucket from a 1936 Ford. 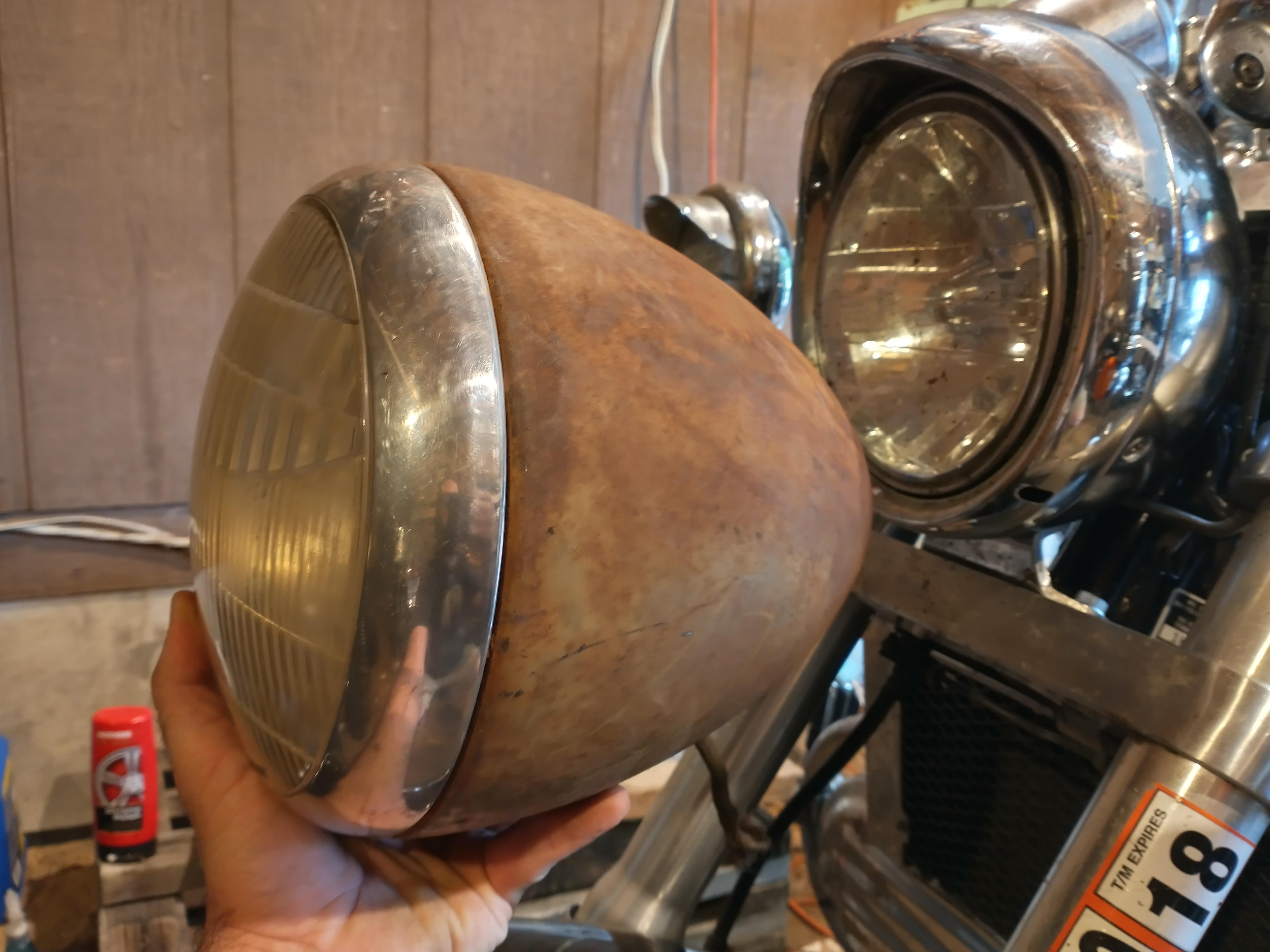 Diameter is about the same, maybe a half-inch smaller around than stock. However, it's about an inch longer than stock as well- not crazy-long, but (hopefully) gives the front end a bit less of a "smashed-in" look to it. I've still got to paint it (black) and clean up the internals (and find a lens that doesn't have "Ford" stamped on it

), but that shouldn't be too hard. Luckily it looks like you can essentially rebuild these to be brand new without too much trouble.

I'm getting to the point where I can't modify a whole lot without taking the bike off the road, so unless I get a couple other bikes roadworthy, any real modifications are going to be a winter project. Still, I think I've got most of the major changes figured out, I've just got to fit them.

Either way, it was enough to keep this thread alive for a bit.

by Lucien Harpress
Not a whole lot new from me, for a couple reasons.

Second, I'm running into ideas I thought were good at the time, but in practice are unworkable. First off? The seat. The plan was to put some kind of cantilever solo seat on it, both to tie the brown of the bag together and because I really like the look. I even got so far as to buying a suitable seat.

Only downside? There is NO way I can make this seat better than the stock seat. It's either too high, too uncomfortable, or just doesn't look right. So, in another case of "Honda got it right", I'm probably keeping the stock seat until further notice.

Another issue is my brake light- it's not going to be doable with the skills and tools I currently possess. I'm looking at alternatives- the current leading contender is a double vertical-stack setup like the Indian Scout used in WWII. I'm still hashing out details, but it also means I'm going to need to re-figure the rear turn signals.

There's other things here and there, but those were the big ones. And either way I figure this thread was overdue for an update.

by Whiskerfish
I do like that brown seat. Is that a complete seat with a pan? i would just strip it down and have it sewn into the OEM seat.

I have not really modified my Valk - mainly because I think Honda got this one right. I have put Viking exhaust on it and turned a Standard into a Tourer, but other than that and a few farkles, it's pretty much in factory trim.

That said, I do like what you're doing and the price of entry sure was nice. (I paid double that for mine in 2015).

by sgwilly
I think you're right about that seat, Lucien. I don't think a bicycle style seat with a narrow front will ever look good on the thick waist of a Valk. When you take the stock seat off, it looks to be about 15" across with those blocky top side covers. She truly is a fat bottomed girl.

As far as the rear lighting - do you mean something like this?
taillight2_iqgv65o1gtdeumsr.jpg
Seems you wouldn't have to touch the turn signals as they're on their typical Honda separate circuits.

Pretty much exactly that. I may play around with light type and positioning, but yeah, I think that will look slick (and work better with the tools I have available).


sgwilly wrote: ↑Fri Aug 20, 2021 3:16 pm Seems you wouldn't have to touch the turn signals as they're on their typical Honda separate circuits.

I... hm. Yeah, we'll see. I wasn't a fan of the thick chrome plastic stem-thing they've got going on that's typical of Honda styling of the late 90s, so I was going to move them up (near where the rear saddlebag mounts would be in that picture), BUUUT I just figured something else out I may be able to make work.

And yeah, there were problems with the seat. I LOVE the look of a cantilevered solo seat, with no visible springs under it, but the geometry wasn't going to work. To look good it would be WAAYYYY too high up to be usable as a seat, and putting it low enough to work essentially just ended you up with a "much worse stock seat".

Of course this means I need a new way of visually pulling the brown in the saddlebags forward, but I've got ideas with that too (mostly revolving around tank bags).

by Lucien Harpress
I'm at a point where any more changes I'd like to do would be too invasive to keep the bike on the road, so most of that will have to be done in the winter. Anything from now until then is either prep-work, or experimentation/refinement of ideas. This is one of those.

I've never like the headlight and gauge placement. The headlight is sucked too far back into the forks, and the wide-set gauges always seemed... "sloppy" isn't the right word, but maybe a bit "awkward". The chrome gauge pods are a bit too "50's bumper extensions" for my taste. Initially I was going to replace the headlight with a larger car bucket (see post above) and recess the gauges into the back of it, but on a whim I decided to lower and extend out the stock headlight and, well...

I... kinda like it. The running lights kind of get in the way, but visually it lowers the bike even more, AND gives me room to bring the wide-set gauges together (and maybe tilt them up too, who knows).

The irony is that I'm STILL going to have to replace the headlight itself, because I still can not STAND that headlight ring. I learned the day the light isn't centered in the bucket, which makes me like it even less. Still, I've got my eye on a Harley K-model light that would work well, and allow me to stick with standard 7-inch headlight parts in the future.

Ah well. I realize this is more thinking out loud than a progress update, but I'm just too busy actually RIDING (for once).

by desertrefugee
I am digging that gauge placement! Good stuff, Lucien!

by Whiskerfish
can't you strip the cover off that brown seat and have it sewn over the top of the existing seat like an insert?
All times are UTC-04:00
Page 8 of 9