by Lucien Harpress
I've actually seen some Indian aftermarket seats that do something similar. I'm considering seeing how that would work on a Valk seat. Maybe get that quilted crosstitch look maybe.

2884226-vna-2.jpg
I might try to mock something up in Photoshop first, see if I like the look. That'll be relatively back burner, though. I need to get my lighting and gauges sorted first I think.

by Lucien Harpress
Speaking of lights and gauges, here's a basic idea of something to mock up this winter. The light has a 7 inch lens, so that's standard. However it flares out to an 8 inch bucket- only 1 inch diameter smaller than stock. It should fit nicely without looking tiny.

The gauge mount is from a 70s Harley Sportster, and from what I can tell the stock Valk gauges will just drop right in. I'll need to clean up the backside somehow, but that's a later problem. I figure the High Beam and Neutral lights can go in the smaller holes, which just leaves the blinker light to work in someplace.

This is all winter work, because I'm trying to make the best of my riding season. I was checking the front forks after one of these rides, and sure enough one is leaking. Thankfully this give me the opportunity to strip the forks down and get the uppers anodized black (powder coat or paint being too thick for the triple tree clamps). Now I just gotta find a small batch plating shop near me who can do it...

by wingrider
Just get yourself a seal savor from somewhere like Amazon, and run around it to fix it….

by Mike-C
Hey guys;
I just discovered this thread, I like it. I have always wondered what kind of a sexy beast was hiding inside a Valkyrie, now you are giving me ideas for a winter project build up. By the way Lucien, take a look at a Ducati 9" headlight, I have one on my Wing and they are magic. I think that GS1100 / 1150 Suzukis had them too.
Mike Coleman
'84 Wing-Lite (ex-Aspencade)
'84 (un-Terstate)
'84 Standard (as yet un-named)
'96 Kawasaki Vulcan 1500 (The Vulcanator)

by gregforesi
I'm a Weber guy. Then there are blower guys. Why not have a party? Why not have two?
Dual BLower Valk.jpg

by Lucien Harpress
My favorite, FAVORITE story about that setup is that, despite running twin blowers, the builders had to de-tune it, either for practicality or so they didn't blow up the engine, so the actual power was only that of one. But still looks rad as all get out, huh? (And one serpentine belt to run both. Crazy craftsmanship.)

I've been sort-of looking at exhaust for mine. The one I'm running is okay, but the drilled baffles are kinda.. something I'd like to address in the future. The headers changing color definitely point to it running a bit leaner, and the popping on decelleration and midrange is not really my thing. I've considered a Cobra 6 into 6, but they don't come up often, require re-jetting, and I'm not sure the sound is what I want, exactly.

However, just for fun I pulled the exhaust tips (maybe seeing if the 6 exhaust holes could get some kind of slip-in baffles- answer being "no"), and realized the overall muffler diameter is 4 inches. Now, I can get my hand on 4" exhaust tips pretty easily that are designed to be installed on 2.5" muffler pipe. I figure, a little bit of trimming, flip them around, add a short length of 2.5" resonator pipe off the back, maybe a slip in a 2.5" baffle to taste- bam, I've got vintage-looking mufflers on the cheap, and maybe get a bit more backpressure back.

It's no 6 into 6, but if I tried to cobble something together with parts, I would be spending the same as I would on a "new" exhaust system, with no guarantee it would work or sound good. At the very least this cheaper option is worth pursuing.

by Lucien Harpress
I would give a play-by-play of what I managed to accomplish yesterday, but it would be the same exact post as the one above this one. So I'll just post up the pictures. 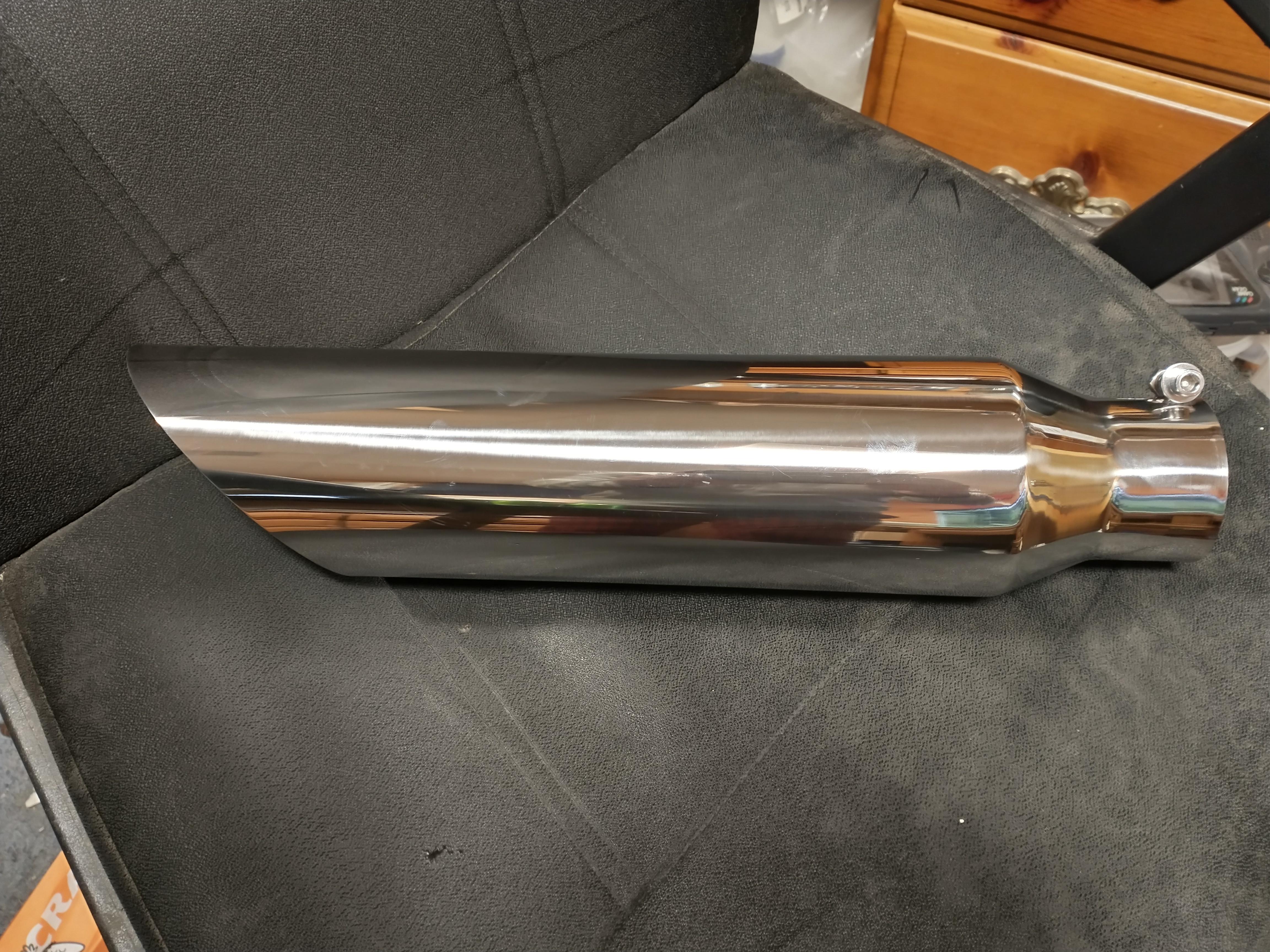 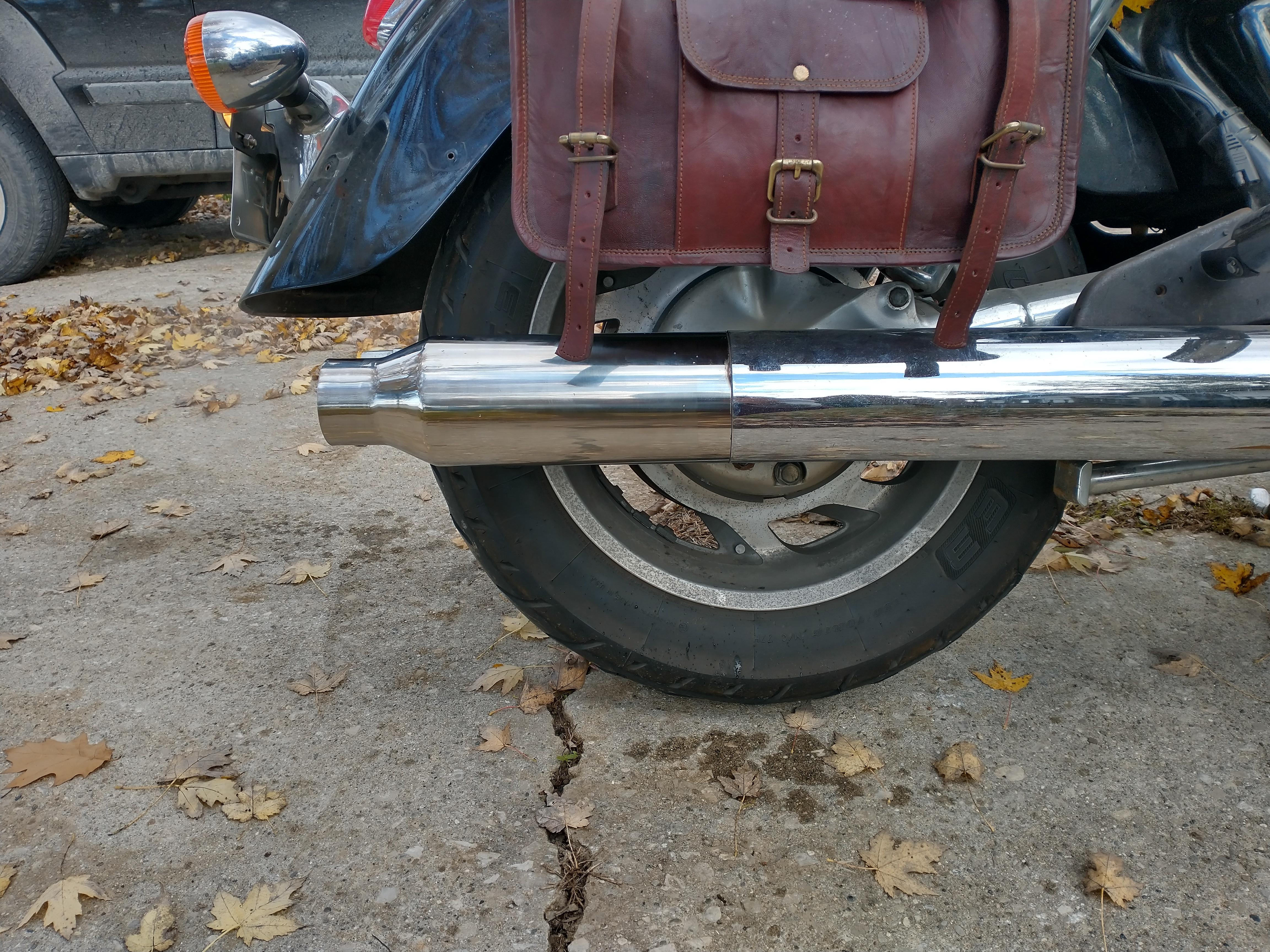 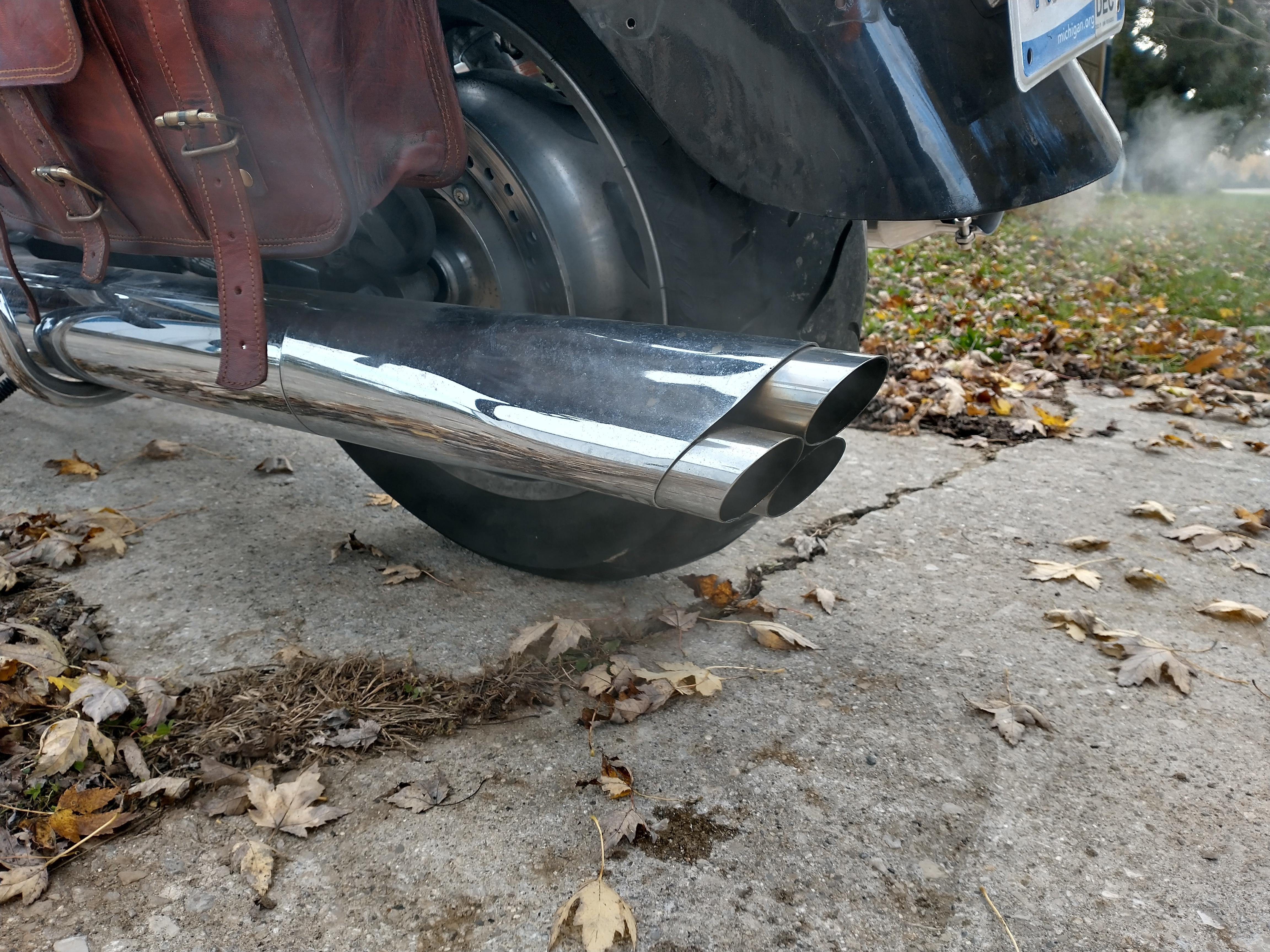 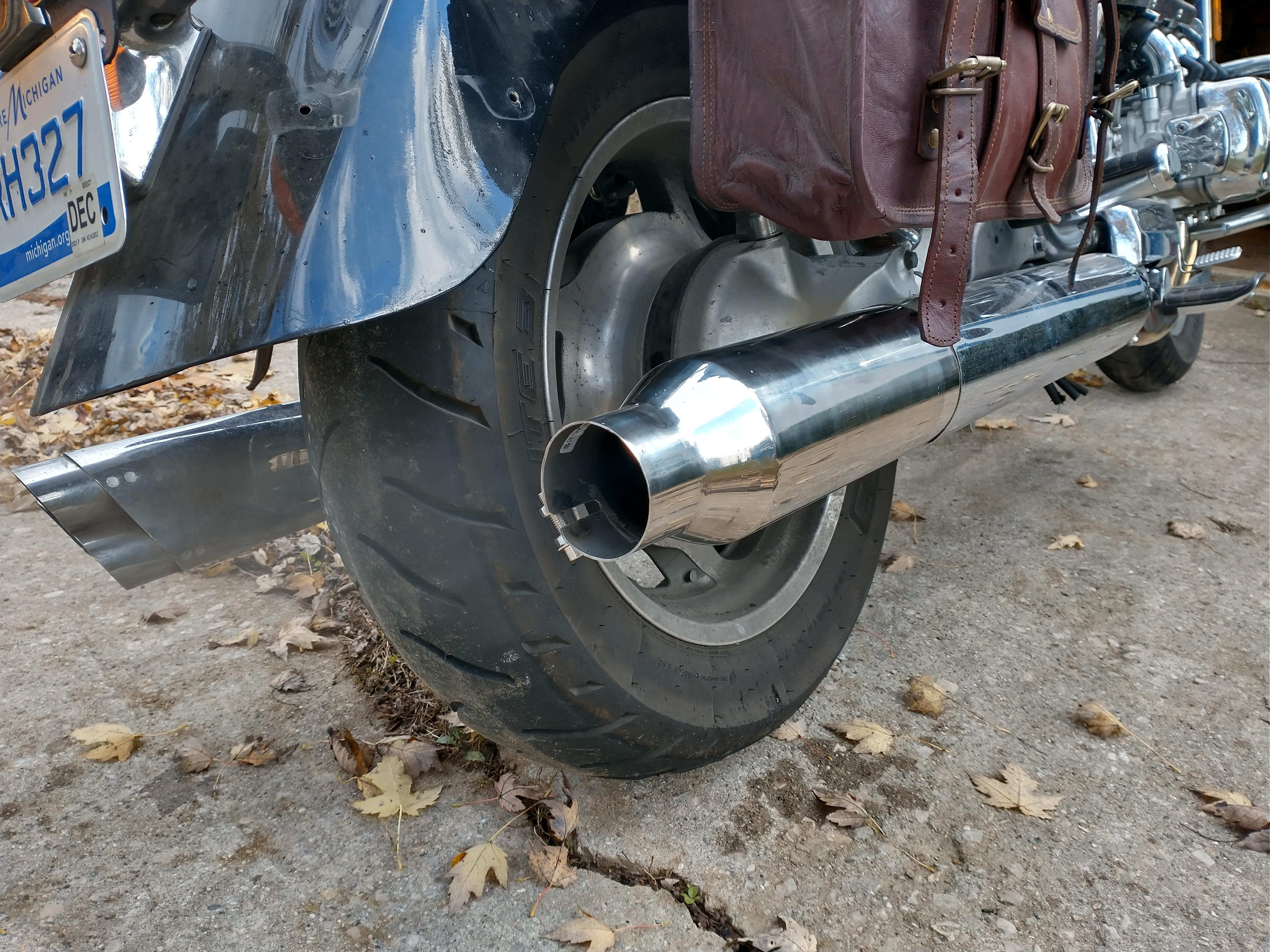 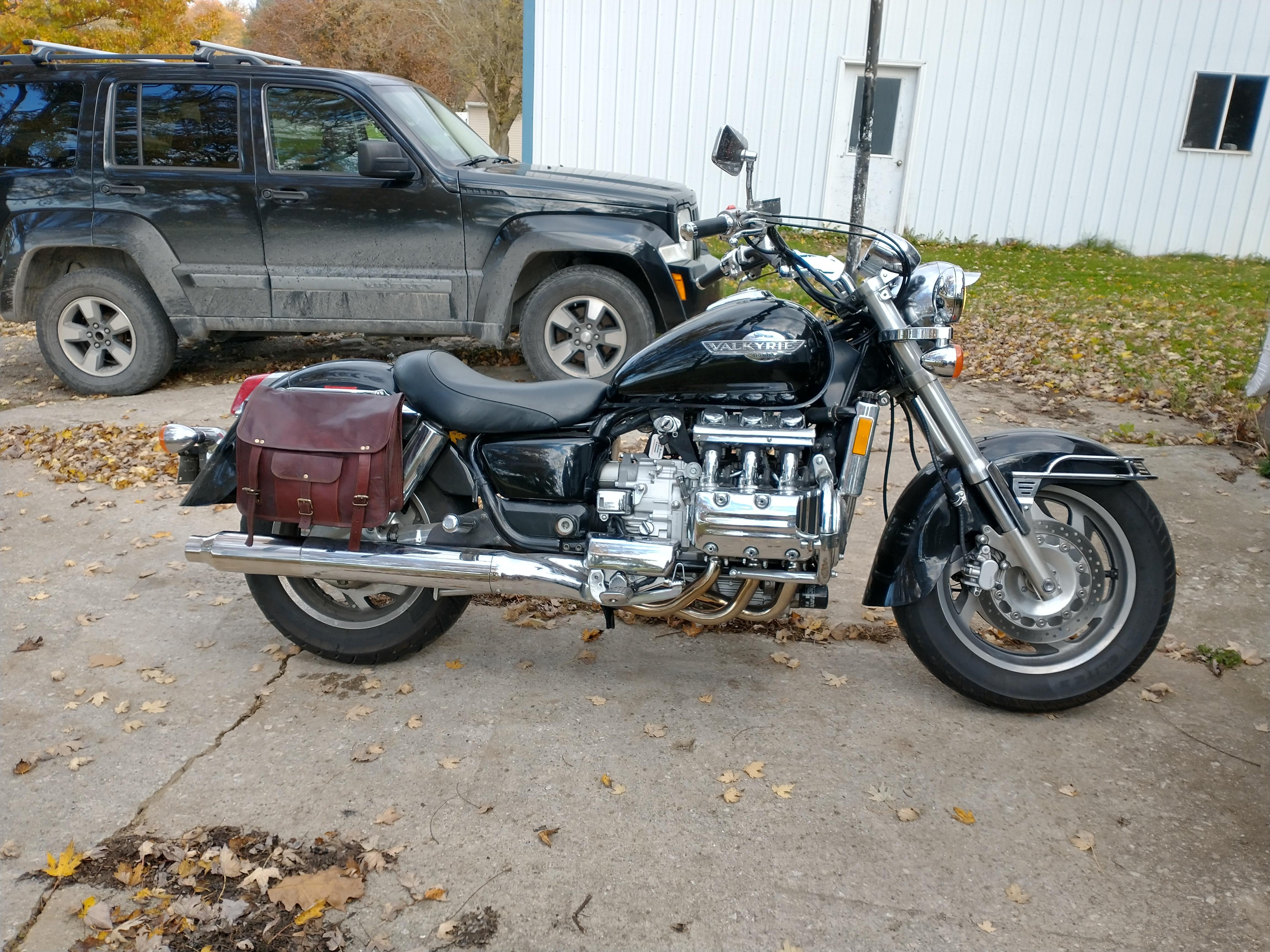 Initially the plan was to cut the tips pretty close to the stock mufflers and add extension pipes out the back (and I still may), but I'm kind of liking the look of what I have. I'm still going to experiment with some slip-in baffles in the back of these, but I'm liking what I have.

by Lucien Harpress
Okay, I kinda dig it. 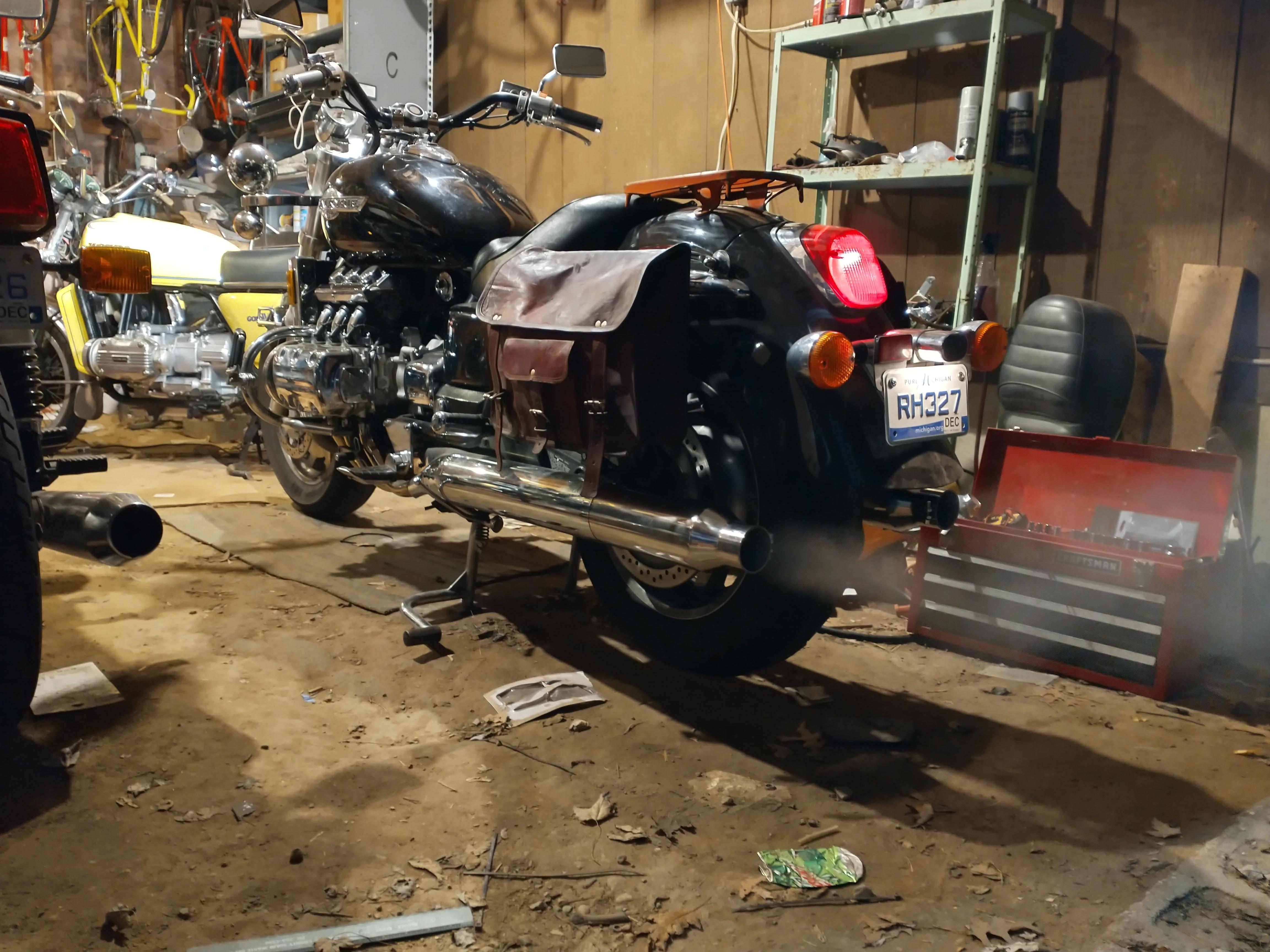 I finally got the new tips on (mostly) permanently, and figured I'd record a short video to see what it sounds like. I slipped in some cheapo baffles to the ends, and apart from a too-short screw on the bottom of the right can I need to replace tomorrow, they are done. Now, the baffles made things a bit quieter, but for the most part just took the edge off the harshness of what I had before. Drilling baffles on the stock exhaust for these things gets you a bit of a throatier sound, but can also introduce droning during long trips that isn't fun to put up with for hours. I've only gone up and down the street so far, so time will tell if I need to modify anything later.

The only thing I might be worried about is how far I necked down the exhaust outlet. True, each side exits out of three pipes smaller than my current final outlet, and I didn't really seal anything that well (gasses can exit around the entire outside, for example), but it's still restricted quite a bit. I didn't notice any difference in power or throttle response on my short ride, but again, it was a very short ride. I'll keep and eye on it, and if I have to ditch the baffles, so be it.

(I'm also not sure what's up with the crackling from the right side. It might be the missing screw, but I've also got a feeling I've had a minor right side exhaust leak at the headers since I brought the bike home, which may be part of it. It hasn't affected anything, so I didn't worry about it.)
All times are UTC-04:00
Page 9 of 9