I Did a Thing: Valk Build/Mod Thread

by Lucien Harpress
I've seen the pros and cons of a desmog, and I'm inclined to leave mine. The mess of hoses seems pretty unmolested (all the clips and clamps are in place), but that probably also means the hoses are original. Regardless, I've got some stuff to clean up when I pull the gas tank. Replacing hoses while it's off shouldn't be too hard.

I've de-smogged my KZ1300, but that was mainly because the system got in the way of EVERYTHING whenever you wanted to do something. The Valk system seems a bit more out of the way, and if it ain't broke, don't fix it. And I'm not inclined to go chasing things in circles, especially with a drilled exhaust.

by Lucien Harpress
This is how things began- the removal of the non-working air horn and compressor, and cleaning up this wiring into the starter solenoid: 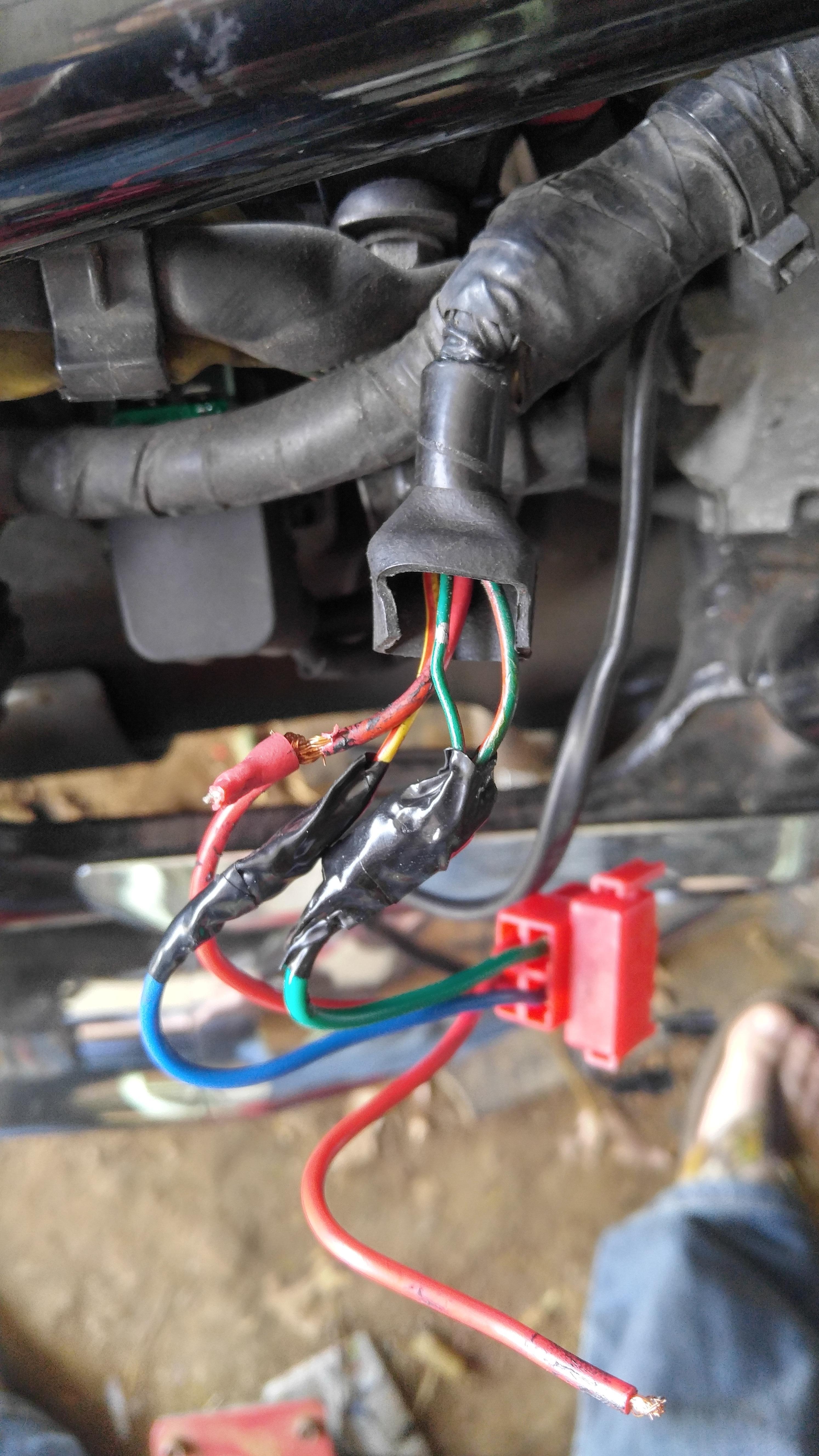 This is how things ended: 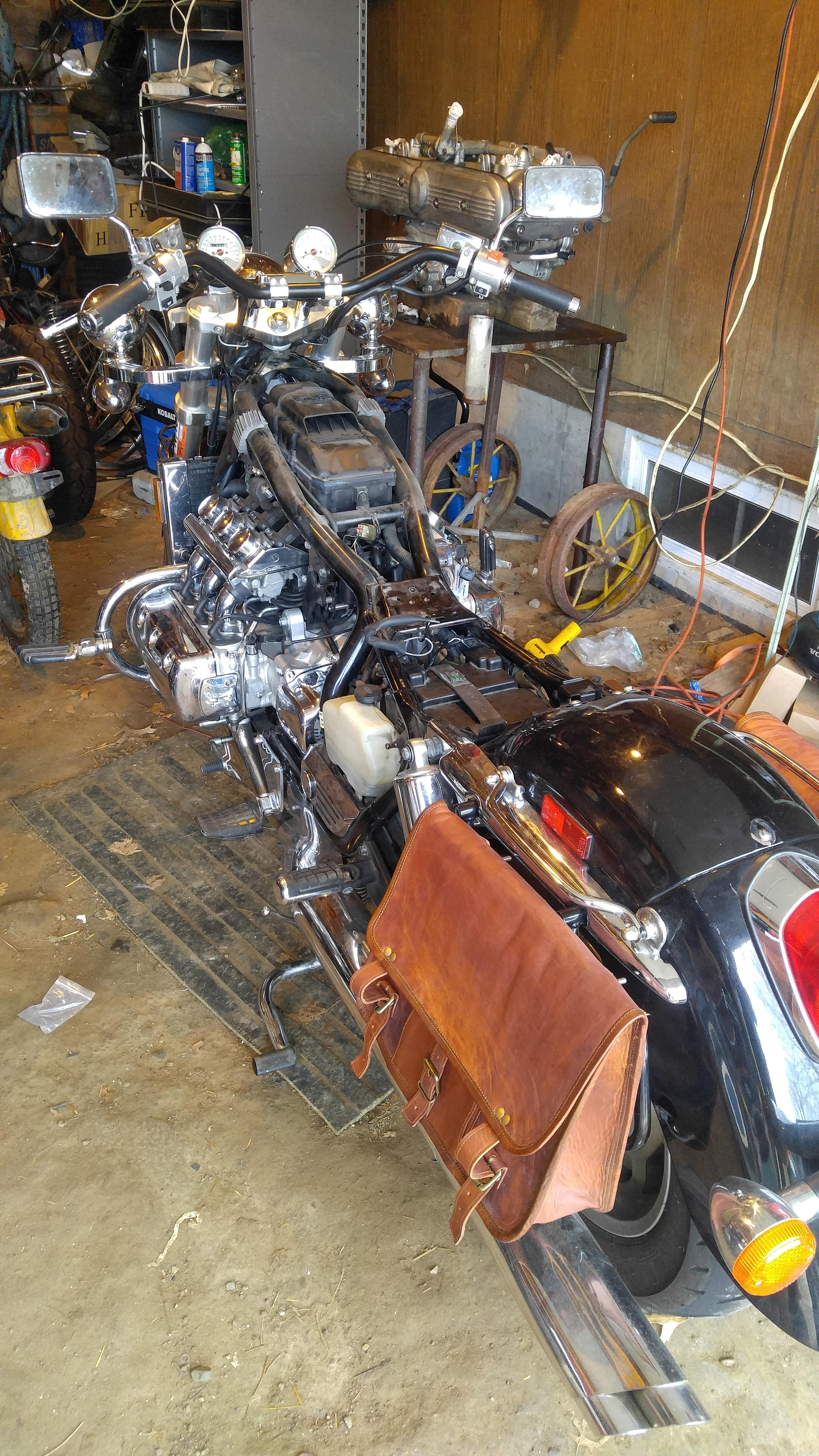 by sgwilly
The only way that I’ve found to manage those hoses when removing or installing the tank is a pair of 8” curved hemostats.

by Lucien Harpress
Yeah, even with the tank off, I couldn't get the vacuum line off. I'm probably going to have to cut it off the petcock. On the upside, replacement hoses are in the mail, due by the end of the week. I'll probably grab a new air filter too while I'm at it. I hear getting the airbox back in can be a pain in the backside, but I've read up on a couple techniques. I guess we'll see.

On a lighter note, I am in LOVE with the design decision of the coil placement. Two of them being mounted vertically above the engine, neat and tidy, between the rear engine mounts. But what's this? No room for a third? Uh... just bolt it up.. somewhere. Anywhere, I don't care. Bam, above the left-hand carbs! Sure, why not?

by Lucien Harpress
Small update- I'm probably not going to get a whole lot of work done in the near future. As a result of playing with my nieces on Easter, I managed to roll my ankle and sprain it pretty bad. But hey, at least it was over a old college sports injury, so that had to help, right?

In any case, we're back to the "theoretical" bike work. First off, I think I'm moving the saddlebags forward. They'd look much better centered on the back wheel, I think. Same with the rear rack. However, this means replacing the saddlebag mounts I have, as the bags are bolted as far forward as possible without the racks being visible. Because every set of support bars I've seen angle backwards, I get the feeling I'm fabbing up my own.

On the upside, I've got a new air filter and vacuum lines on. The lines looked pretty good, but all the caps were cracked. The idle and rev in the garage seemed like an improvement, but an on-road test will have to wait until my bum ankle decides to shape up. Still, I'm looking forward to it.

by desertrefugee
Progress is progress. There’s always something. I found that all the hype and complaining about getting the airbox on and off was exaggerated a bit. (My opinion). I felt it was a nonevent. Mine has been off several times.

I de-smogged mine the same year I got it. In my opinion, it just removes another potential future point of failure. Actually many points of failure. Vacuum leaks are insidious little devils. The biggest chore is plugging the holes in the heads when you pull the airlines out.

Sorry to hear about the ankle.

desertrefugee wrote: ↑Mon Apr 05, 2021 10:01 pm I found that all the hype and complaining about getting the airbox on and off was exaggerated a bit. (My opinion). I felt it was a nonevent. Mine has been off several times.

I know, right? Half the airbox threads about the Valk are how much of a pain getting the airbox in and out was, and it was one of the easiest parts of the job. I suppose things depend on how flexible the intake runners are, but even still it's not like a job that needs three hands. Heck, the hardest part for me was getting the gas tank overflow tube back on. (How they managed to hide it under a frame gusset, I'll never know...)

I also finally got a service manual in the mail, and apparently you can unscrew the plastic petcock lever extension WITHOUT having to remove that cotter pin? I've definitely been doing THAT wrong...

by sgwilly
Yeah, I remember the first time I took the tank off. Luckily I saw the hole in the petcock knob and thought, I think I’ll shove a screwdriver in here and see what it does. Once I get both tank mounting bolts off and the petcock know unscrewed, I just lift the rear of the tank about 4" and remove the drain hose with hemostats, then lower the tank back down and use the hemostats to remove both the large fuel line and vacuum hose from the petcock from underneath. Then the whole tank can be pulled off. Takes about 2 minutes.

But you probably know all that by now. Nothing like doing it to learn it.

by Lucien Harpress
Sad thing is that I knew about the screw inside the petcock lever- it's just for whatever reason, the cotter pin wouldn't let my screwdriver get a straight enough shot at the screw to get it out.

by Lucien Harpress
Being one of the first days it was really over 75 degrees, I figured it was only right to get the Valk out to blow some of the dust out. 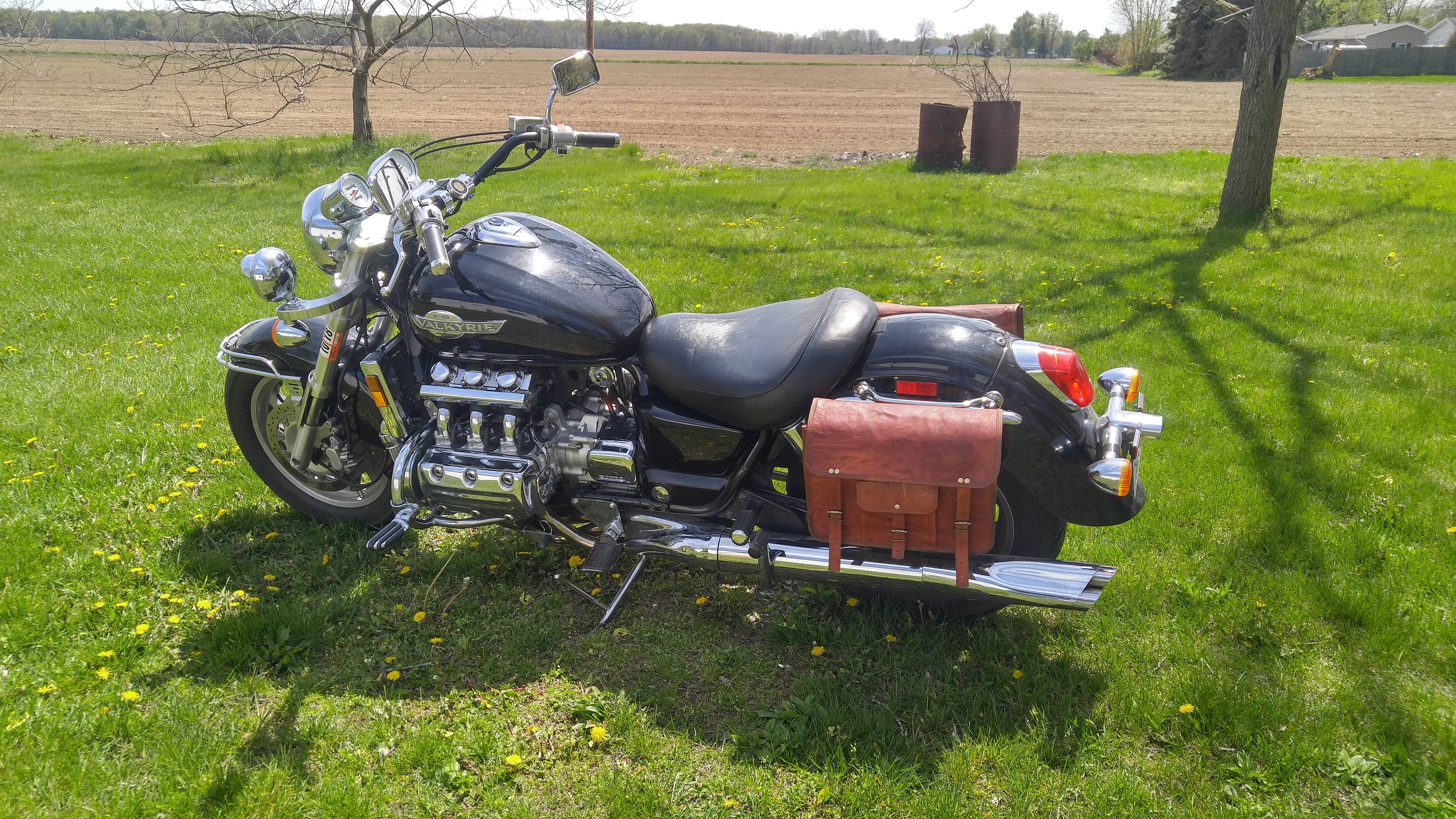 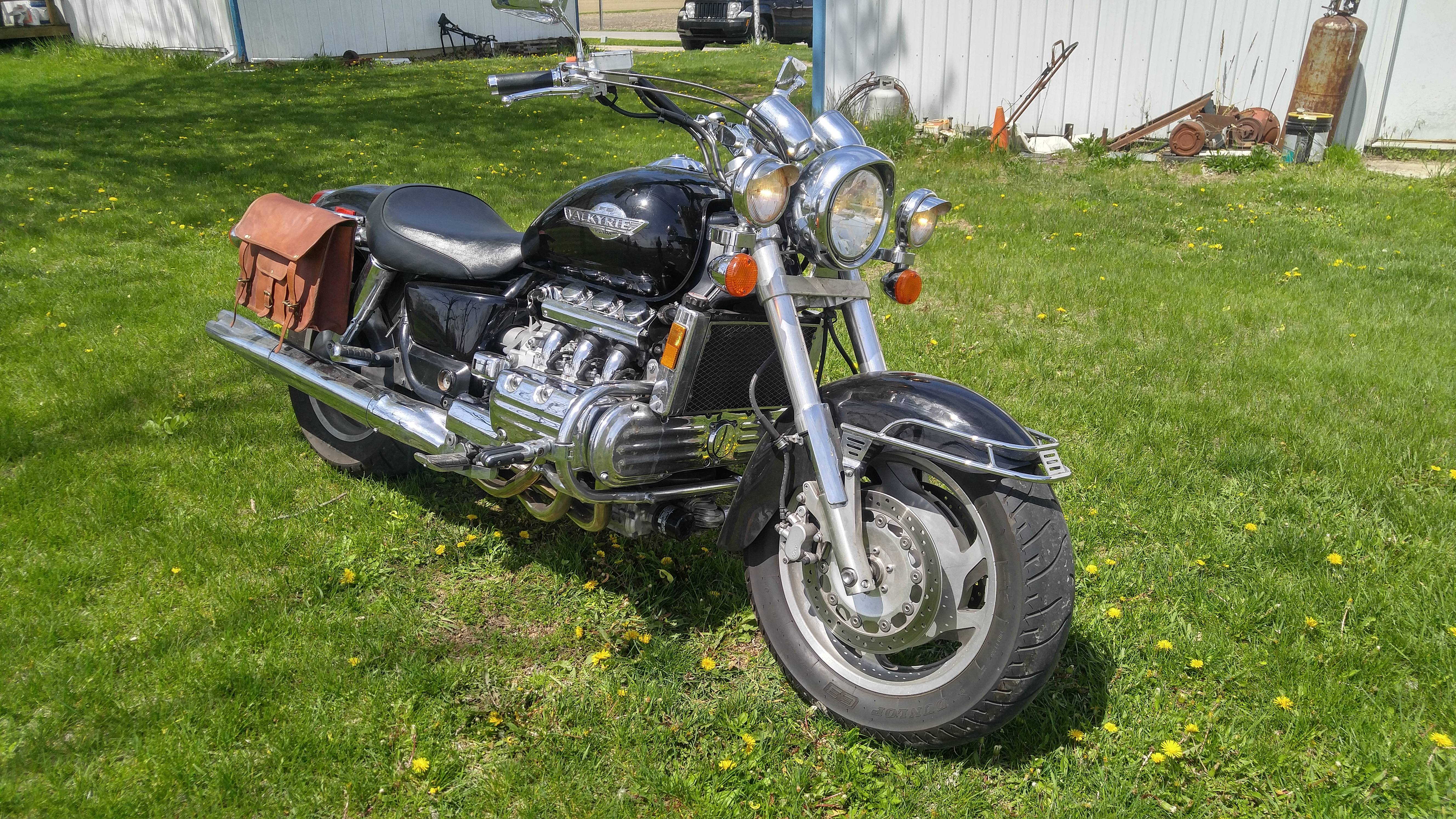 First to note is that I finally got the saddlebags moved forward more toward the center of the rear wheel. This required new mounting brackets, and (due to a change in bolt position) plywood reinforcement in the bags themselves. Thankfully there is an inner zippered pocket the wood can slip in to, which means the bags are fully supported in a way that's invisible from the inside.

Second note- I think I love this bike. Sure, gas mileage is "eh", but the combination of smooth, power, and stability is absolutely astounding. Yeah, you hear it all the time, but the fact is, everyone is right. I miss the ability to see a car, decide, "I want to pass that person", and just twisting the throttle making it happen. No planning on gears, downshifting, whatever- just gobs of power, on-demand. Took it on the freeway for a bit- it didn't care. 75-80 mph, and it could do SO much more.

by Jonesz
The power "on demand" is the really nice thing about these bikes.Love mine and will not be getting rid of her. She is my forever bike. Glad you are enjoying yours.

by Lucien Harpress
So, real talk here for a bit:

There's a lot I love about the Valkyrie. The engine is great, the layout is great, even some of the body styling isn't bad. But that being said?

I hate every light and indicator on it. The headlight is okay, but I'm not feeling the "almost" top lip-visor thing, and it's recessed too far back into the forks. The brake light is like an attempt at an edgy tombstone style setup, but designed by committee. And the less said about the forgettable generic 90's plastic chrome turn signals, the better.

I'm at a point with this bike I'm going to start to rectify these. I'm probably swapping to a black bucket and a plainer bezel ring for the headlight, but that's going to be a Mid-Ohio parts crawl item (the biggest issue being the massive non-standard diameter). The taillight is just going to a plain round one, hopefully with a BMW-airhead style coffee can mount. Again, hopefully pilfered from somebody's spares pile. The blinkers, however, I can do something about now. 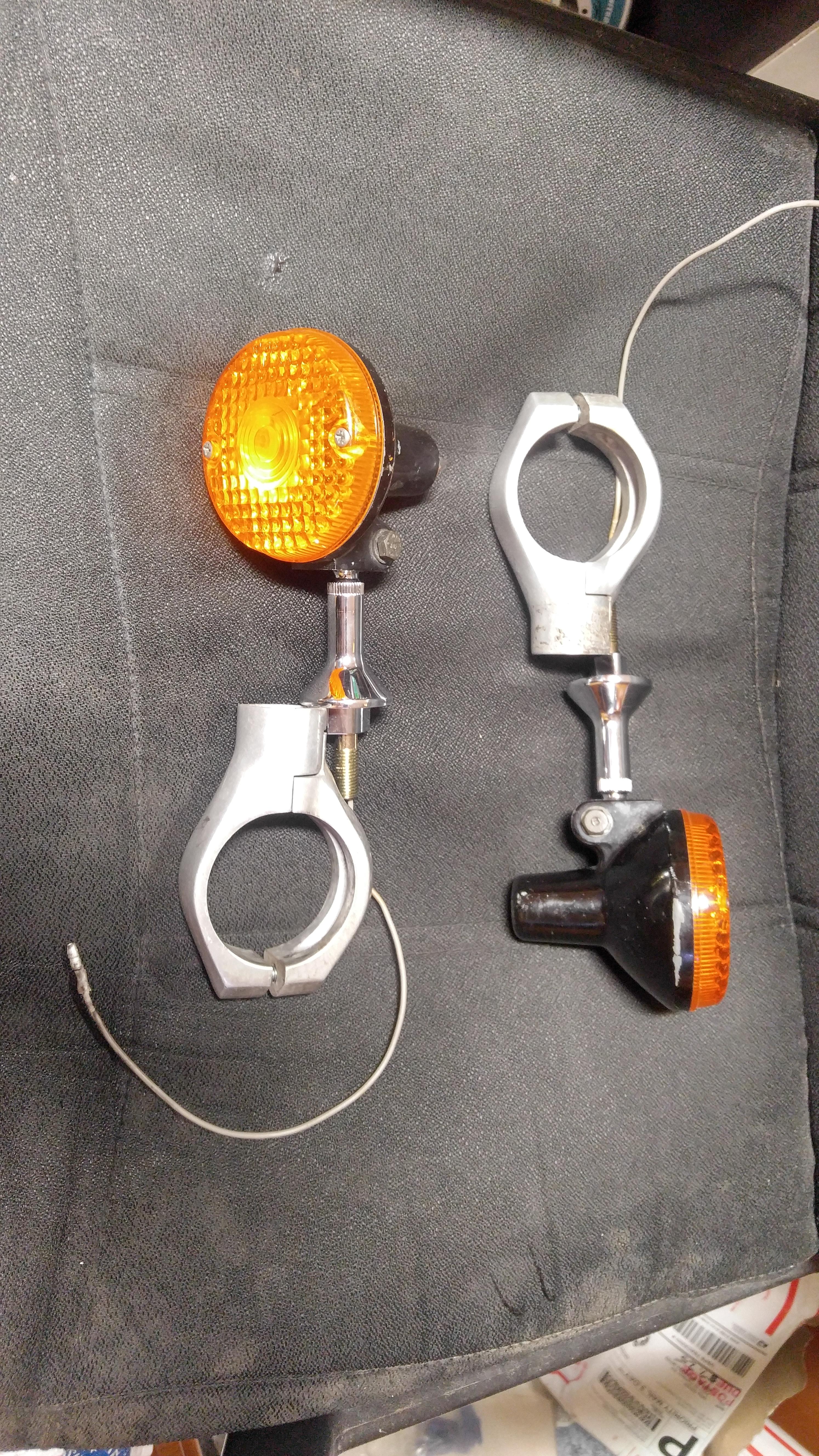 I've had a set of these black KZ blinkers ever since I pilfered the stems for my KZ1300, and have always liked the look of them. The early style CB750 blinkers were a close second, but I liked the idea of black signals. The chrome stems may be a bit odd, but hear me out- I'm hoping to polish up the stock front Valkyrie turn signal mounts to a similar sheen, and anodize the front forks black to make them pop a bit. That way the front will be predominantly black with chrome highlights. Powdercoating is out, because the Valk runs inverted front forks, and the added thickness won't get it into the triple tree. 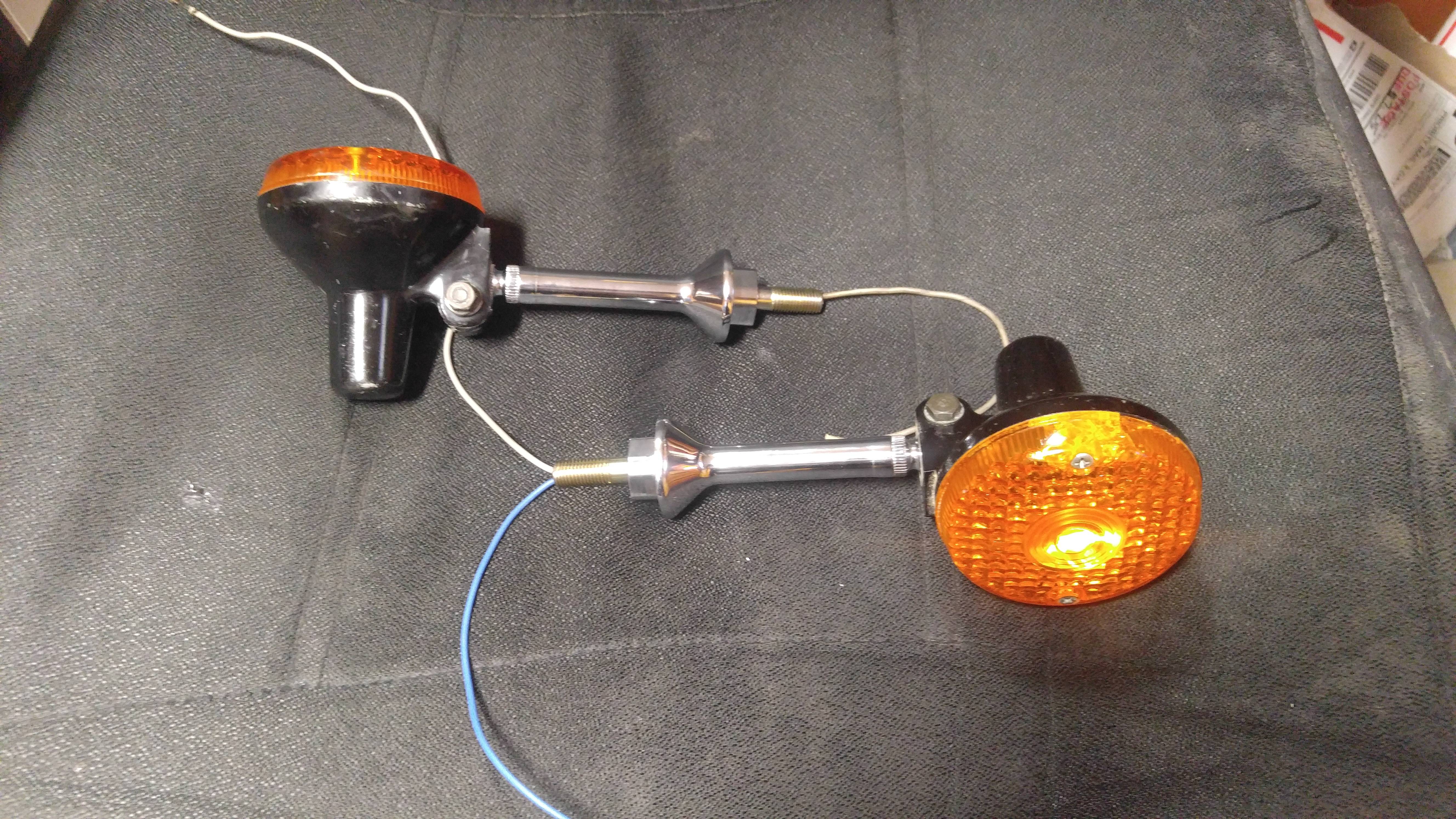 The rears are longer, because the plan is to relocate them back up to each side of the brake light. I snagged a license plate bracket off a Honda Shadow 750 Aero that should bolt up to the stock Valkyrie hardware and light, but eliminate the turn signal mounts.

That said, the bike may look funky for a bit. I'm much closer on the front mounts than the rear, so I may have two separate style turn signals for a while. It all depends on how quickly I can get the brake light figured out. Until then!

by wingrider
Not sure what look you are going for, but on the headlight situation, a few folks have taken a VTX headlight and placed it on the Valk....gives it a different look.

by desertrefugee
I have a lot of modified motorcycles shop. None of them are factory original. But, the one that is closest is my Valkyrie. I think Honda got that one right. Other than adding a number of farkles, exhaust, auxiliary lighting seat and creating a tourer - which Honda never did with the bumblebee color scheme - mine is pretty much the way it was.

I think the Valk is already unique enough in its own way and that uniqueness agrees with me. For sure there's nothing wrong with what you're doing, Lucien. In fact, I'm looking forward to see how this thing turns out! I have just never felt the need to make design changes to the bike.

by dontwantapickle
Suggestion:
you could just remove the turn signals, the fenders, chop off the exhaust, and call it a "bobber".
(paint it flat black for that truly extra custom look)
All times are UTC-04:00
Page 7 of 8