by AZCycle73
This is an addition based from Roady's original thread here.
_____

I installed the Geo temperature switch this evening, with a little creative wiring. I didn't want to remove the original plug, in case I wanted to go back to an original style switch in the future. Some of you guys probably already figured this out, but I thought I'd at least post my process in case it helps some of you...

The area inside the Geo switch is so cramped that even two small blade connectors didn't fit well. They DID fit but were touching, which is not a good thing. So I took the blade connectors and trimmed back the plastic sheath, but left enough to protect the crimp area.

I then soldered a 3-4" length of wire onto the BLADE part of the connector, and then protected using some shrink tubing.

On the opposite side, I soldered two of the large bullet connectors, and of course... more shrink tubing.

The crimped part of the small blade connectors slid over the Geo switch just perfectly!

So I have this:

The bullet connectors fit into the original plug really well. They seem nice and tight and don't move around so I assume they're good. Not sure how I'm going to protect them from the elements. And I may have to zip-tie the wire away from the fan blades.

by docfishr
Nice!
To protect from the elements I suggest using liquid electrical coating instead of the tape. I have had good success with it.
by 65olds88
Does it work as well as the factory one?
by AZCycle73

We'll see... I have yet to hear my 'wing even start yet so functionality of the new temp switch is up in the air. But others here are using them, some with good results and others with mediocre results.

Once I get my 'wing up and running, I'll certainly post back with results.
by Roady
My homemade switch is probably good. I had thought that it wasn't working but after getting everything back together with the OEM switch in place ... the fan still didn't work.

I jumpered the fan and it was not working.

Tore it apart again and got the fan motor out and found rust/corrosion and gunk inside. I polished it all up, reassembled and like magic it works perfectly now. Temp never goes above about 1/2 way on the meter.

So, I guess I've got a spare switch now.
by AZCycle73
Good to hear, Roady!
by ElPiloto
There was a Geo Turbo that was sold in Canada. It has the turn on point about 10 degrees lower than the regular Geo switch. That might be the way to go here in Arizona.
by roncar

We'll see... I have yet to hear my 'wing even start yet so functionality of the new temp switch is up in the air....

Ok, I must have missed it. If you have never had the engine running, how did you determine the original temp switch was bad?

We'll see... I have yet to hear my 'wing even start yet so functionality of the new temp switch is up in the air....

Ok, I must have missed it. If you have never had the engine running, how did you determine the original temp switch was bad?

I assumed it was bad because the PO had hard wired the fan directly to the battery. In all honesty, I figured that while I was in there, radiator out, timing belts, replacing o-rings, etc., I might as well bite the bullet and put in a new temp switch. Then I saw the "how-to" and got intrigued.
by Roady

ElPiloto wrote:There was a Geo Turbo that was sold in Canada. It has the turn on point about 10 degrees lower than the regular Geo switch. That might be the way to go here in Arizona.

I wonder about the threads/size?

You test the switch by suspending it in a pan filled with some motor oil. Heat up the oil and watch your dollar store candy thermometer. Hold the leads of your meter on the connectors. If it switches on at temp then it's good to go. If it doesn't then it's toast (& $59 to www.ServiceHonda.com).

Butt, my meter was setup wrong in that pic. Read the rest of this thread to get more details.

A similar test can be done on the Water Temp Sender.

Detailed instrux and temps can be found in the manuals.
by ElPiloto

I wonder about the threads/size?

It's the same 3 cylinder 1000 cc engine, so I would have to believe it's the same size, but with a different turn-on temperature.

Since the Geo is out of production now, and the turbo Geo's are very rare, I imagine it would be difficult to find the switch now. But, the next time I see one listed in a catalog, I am going to try to order one.

by Roady
I was looking for more info on this switch. It looks like Steve Saunder's Forum really took off on this idea. Check out their thread here.

Here's a cut-n-paste collection of more data on the switch, and other options available. I haven't checked these out, just going by what the gang over at Saunder's is saying about OUR fix.

The Part Number Collection:A word of caution ... running the OEM thermostat with these Thermo Switches is not recommended. Your fan will be running all the time. I use the Stant 13868 82 deg C.
I didn't have a problem with the Geo switch and NAPA #101 Thermostat. Roady

Peterbylt did a pretty nice job on his adapter. Since he stole my idea (while only crediting this board), I stole his pics. 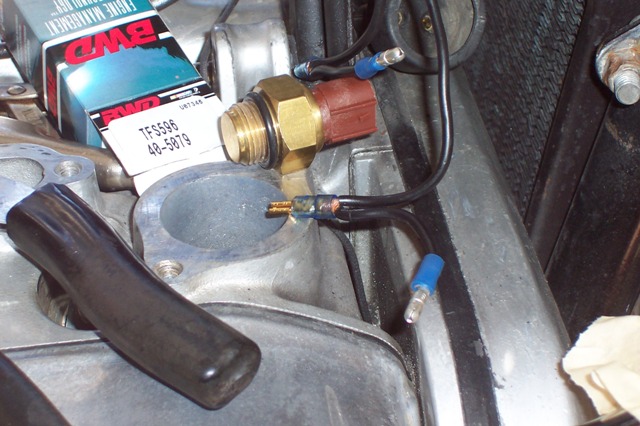 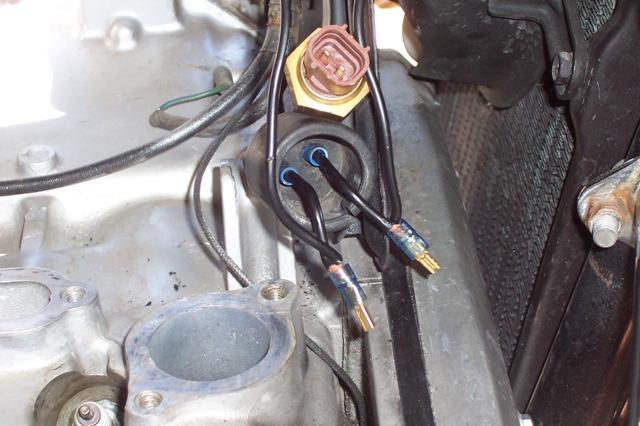 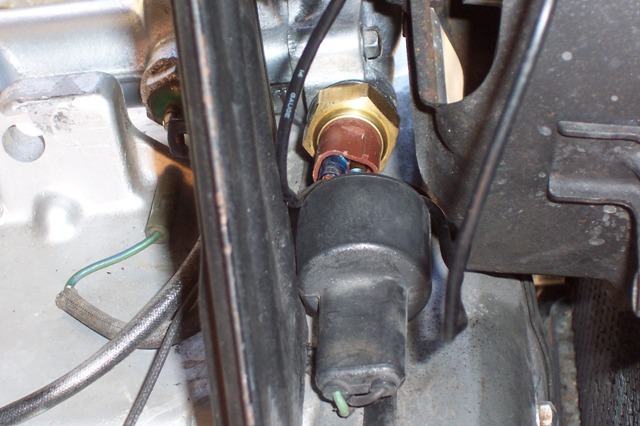 All's fair, eh?
by technojock
I think I can get the connector for the Geo thermo-switch. Would these be worth 4 to 5 buck a pop to you guys? I would likely have to order 50 of them to get a good price and I don't want to be stuck with them...

Tony
by Whiskerfish
I doubt you could move that many here but it you put together a package of the connector and the switch and made it as plug and play as possible I think you could do very well on Flea BAy.
by ElPiloto
While researching EFI sensor connectors, I found that GM makes pigtailed connectors for amost every electrical plug on any recent GM car.

If you could get the connectors for the Geo switches and sell them together, as I'm sure, as Whiskerfish suggested, that you could sell a bunch of them on eBay.