Hi everyone
I received this Gl1000 a few years ago, after having bought her sight unseen. On the whole she was in pretty decent nick,original exhausts etc, mainly all the bits were there. She had also not done much milage. With the help of this forum she is finally finished , so i just wanted to drop a post and say thanks

So how i recieved her, paint peeling, rust etc, but overall very restorable...(i started with redoing the seat as in this photos) 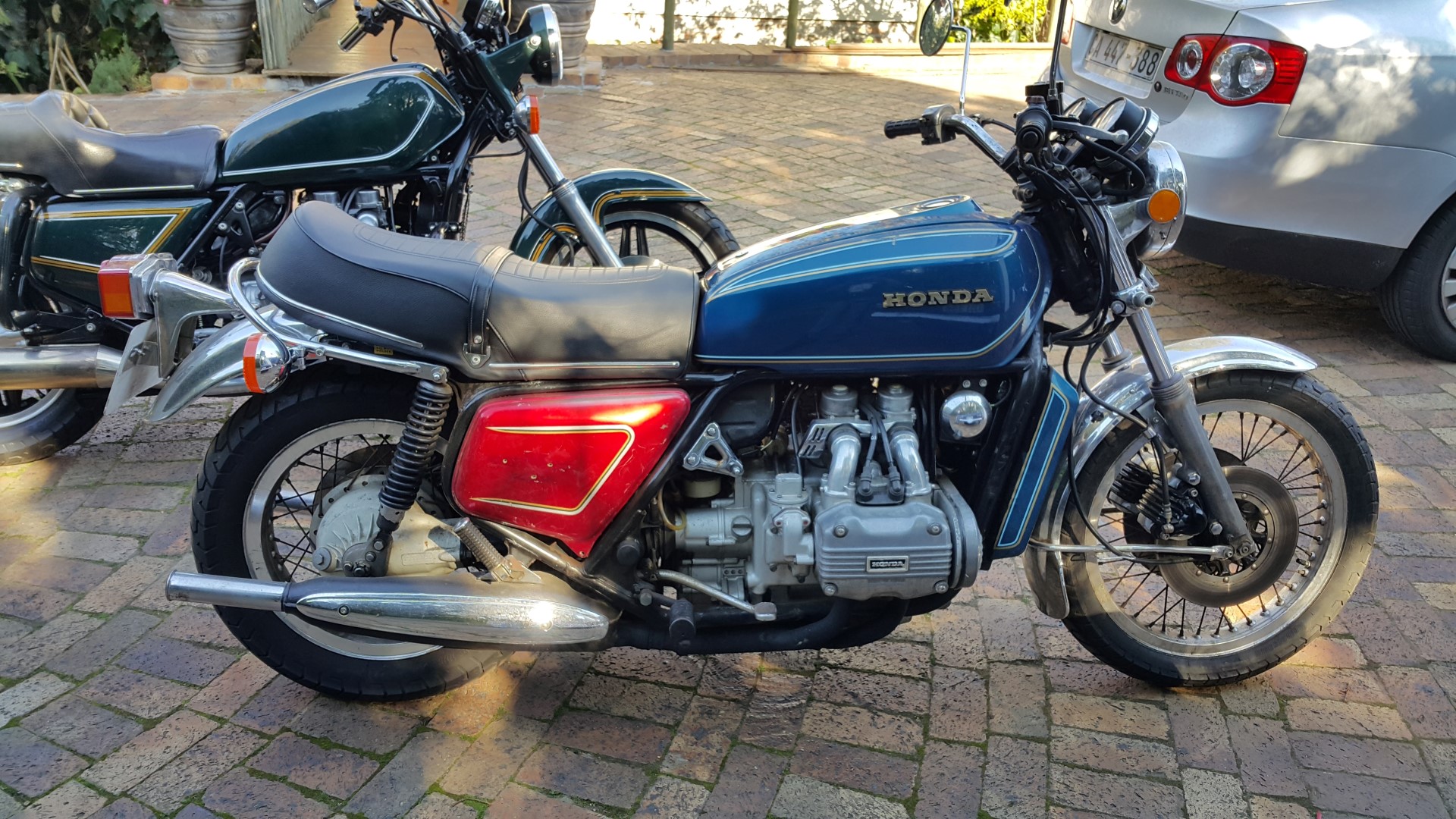 Tried her out with a change of color, but decided the original blue was best 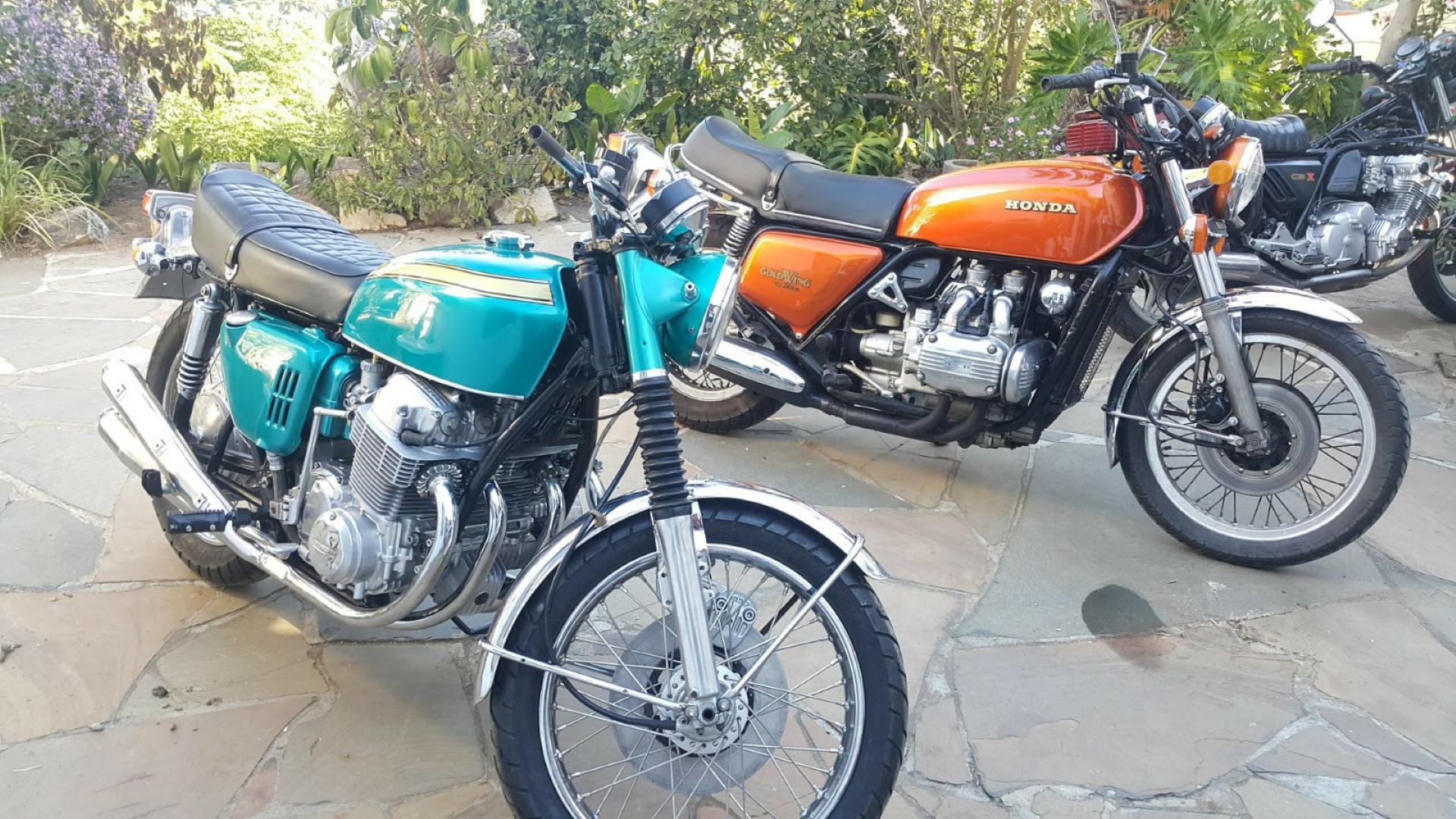 After finishing up on a few things i finally got around to starting her restoration, but being a clever sort i have built my garage below the house and had not built a roadway to get the bike down there.
Forethought and understanding are sometimes in short supply....
So it was dissasembly up top and a cable car (pun) system in getting the engine and bits down there 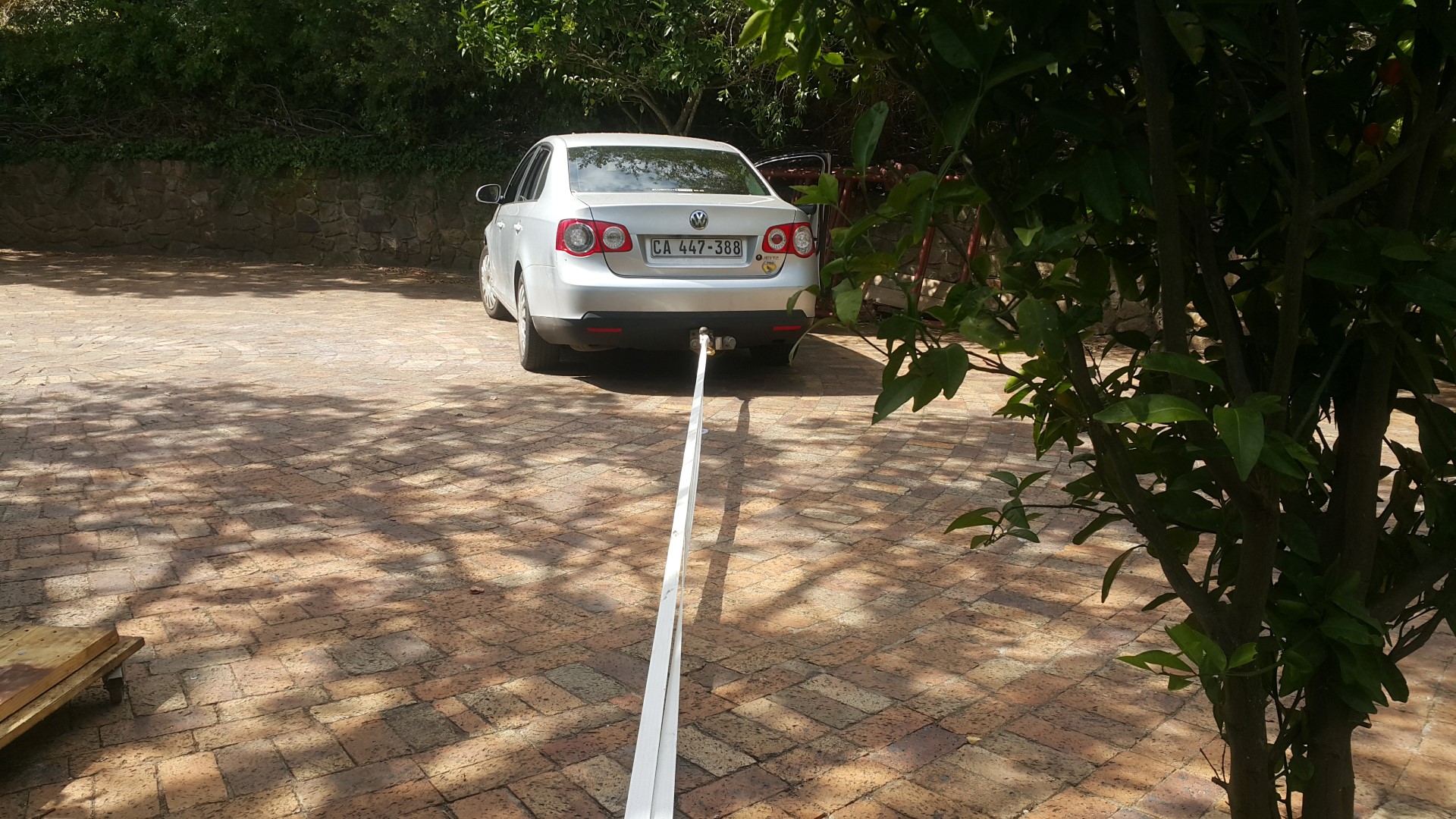 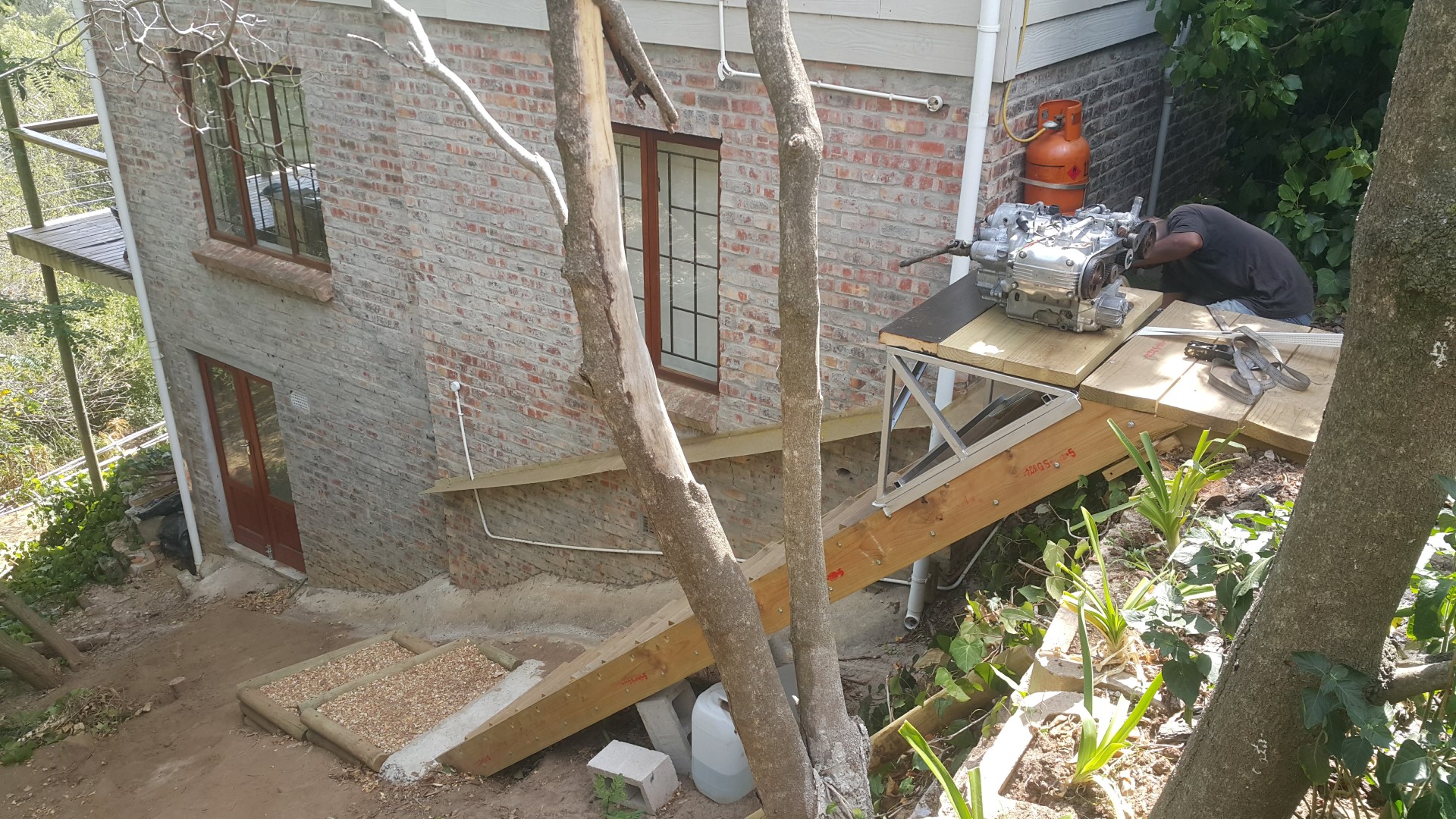 I have since built a brick road up to the top, and its hairy.... but the goldwing managed it today without killing me , and thus my posting...
I affectionately Call it the wall of death.. 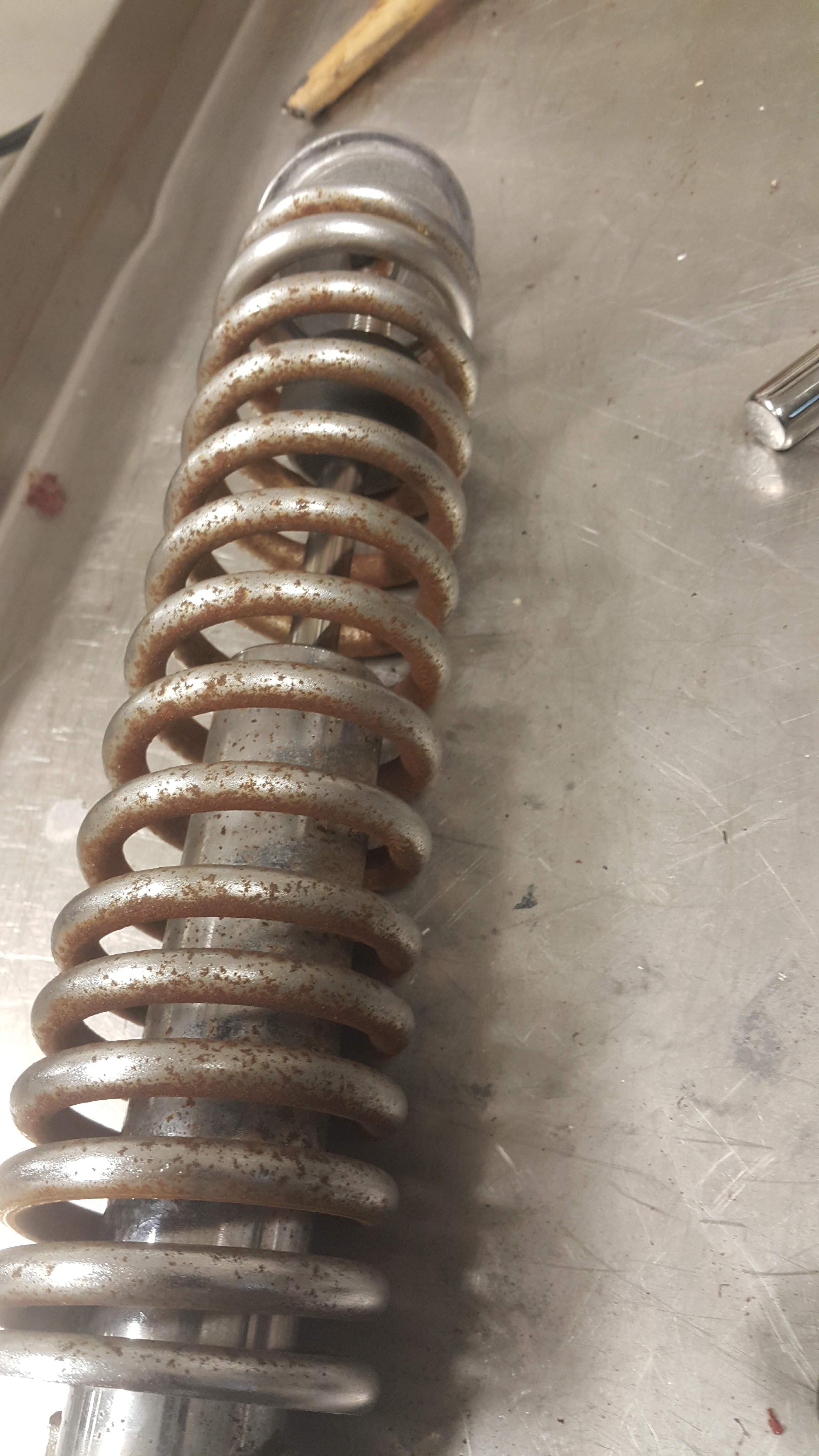 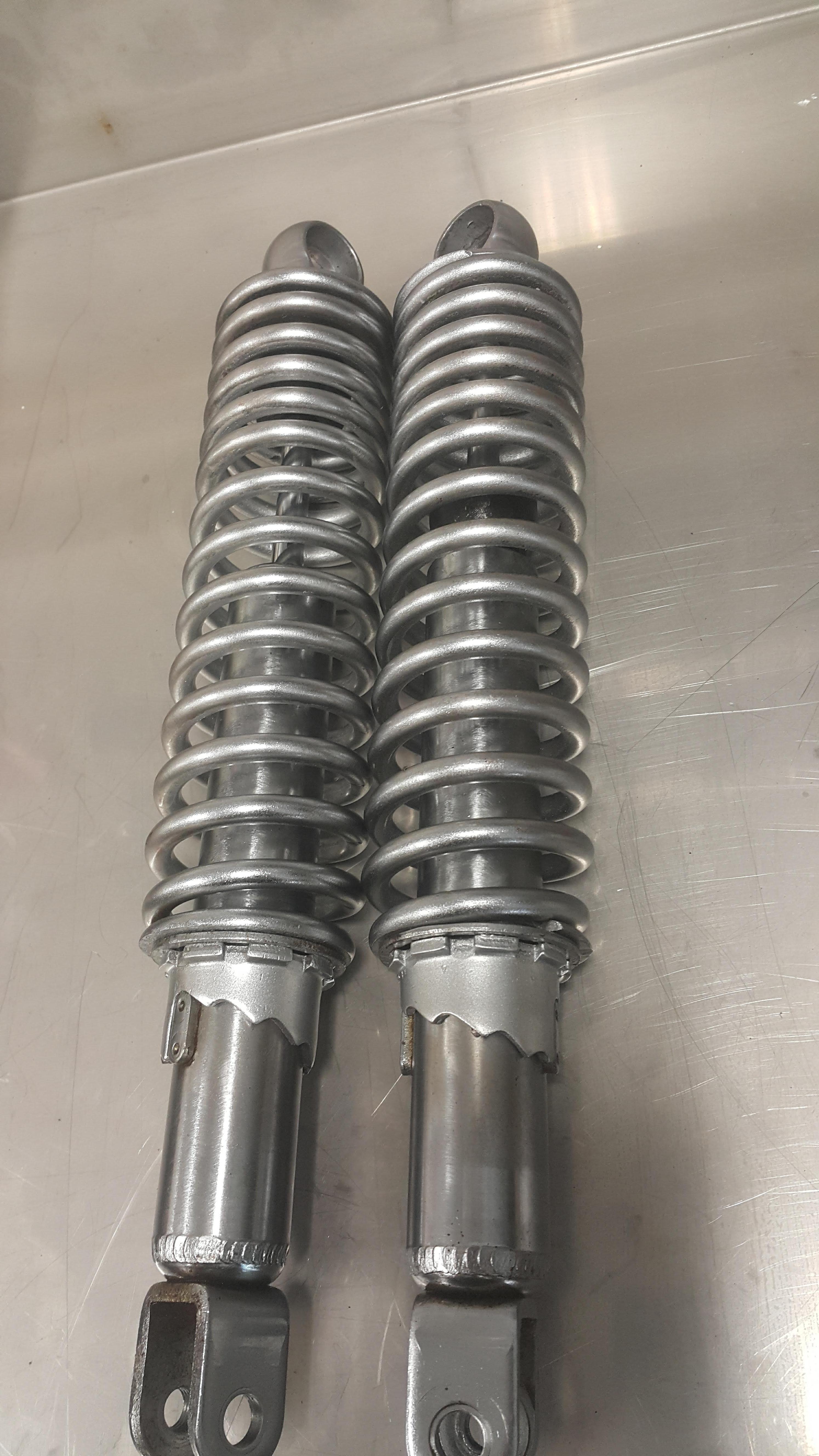 The engine painting was NOT fun, took alot of tries to get it right as ...was too hot (weather) paint was then not mixed correctly, dust etc, but all my fault, i eventually got it right... ish 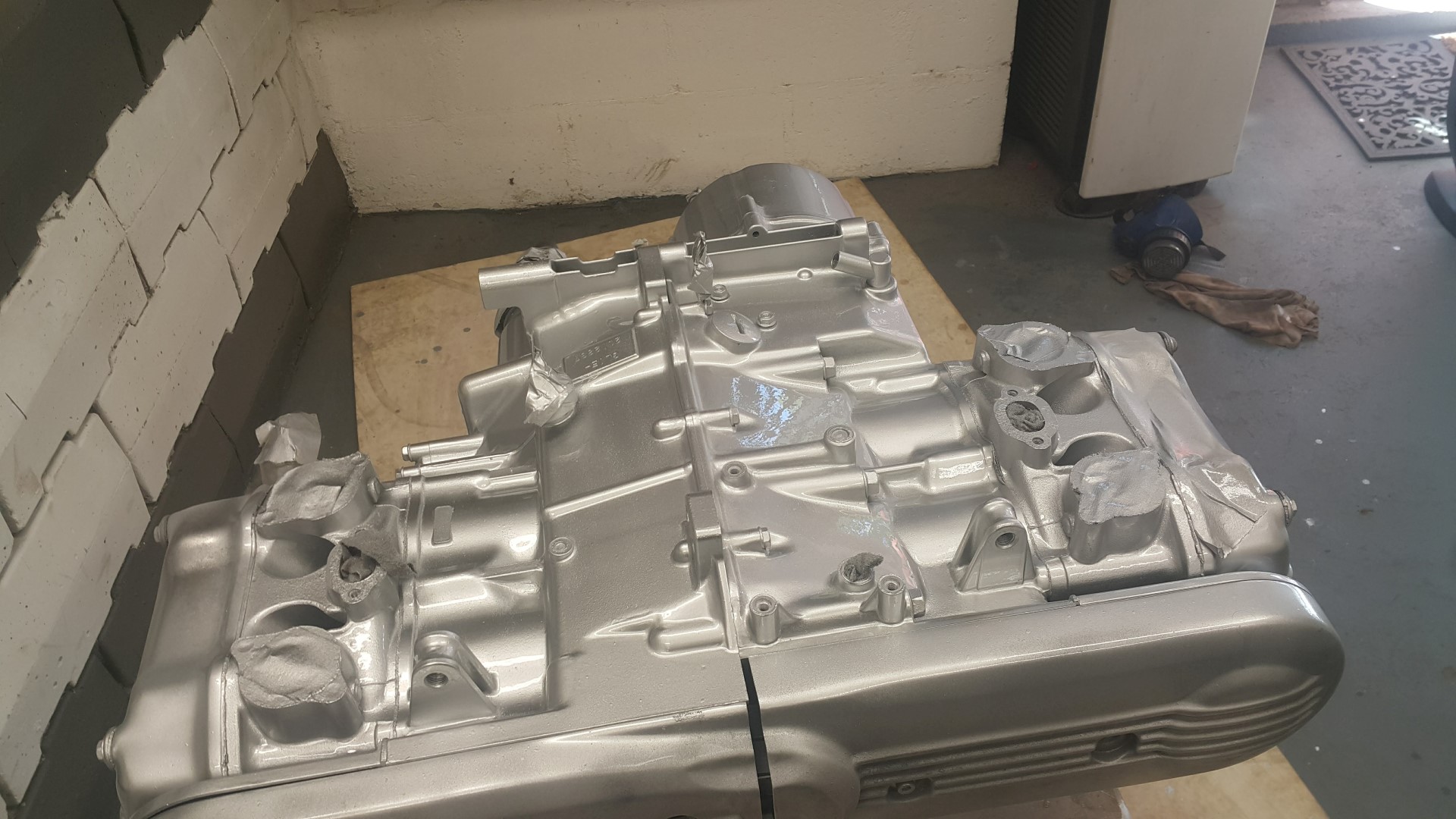 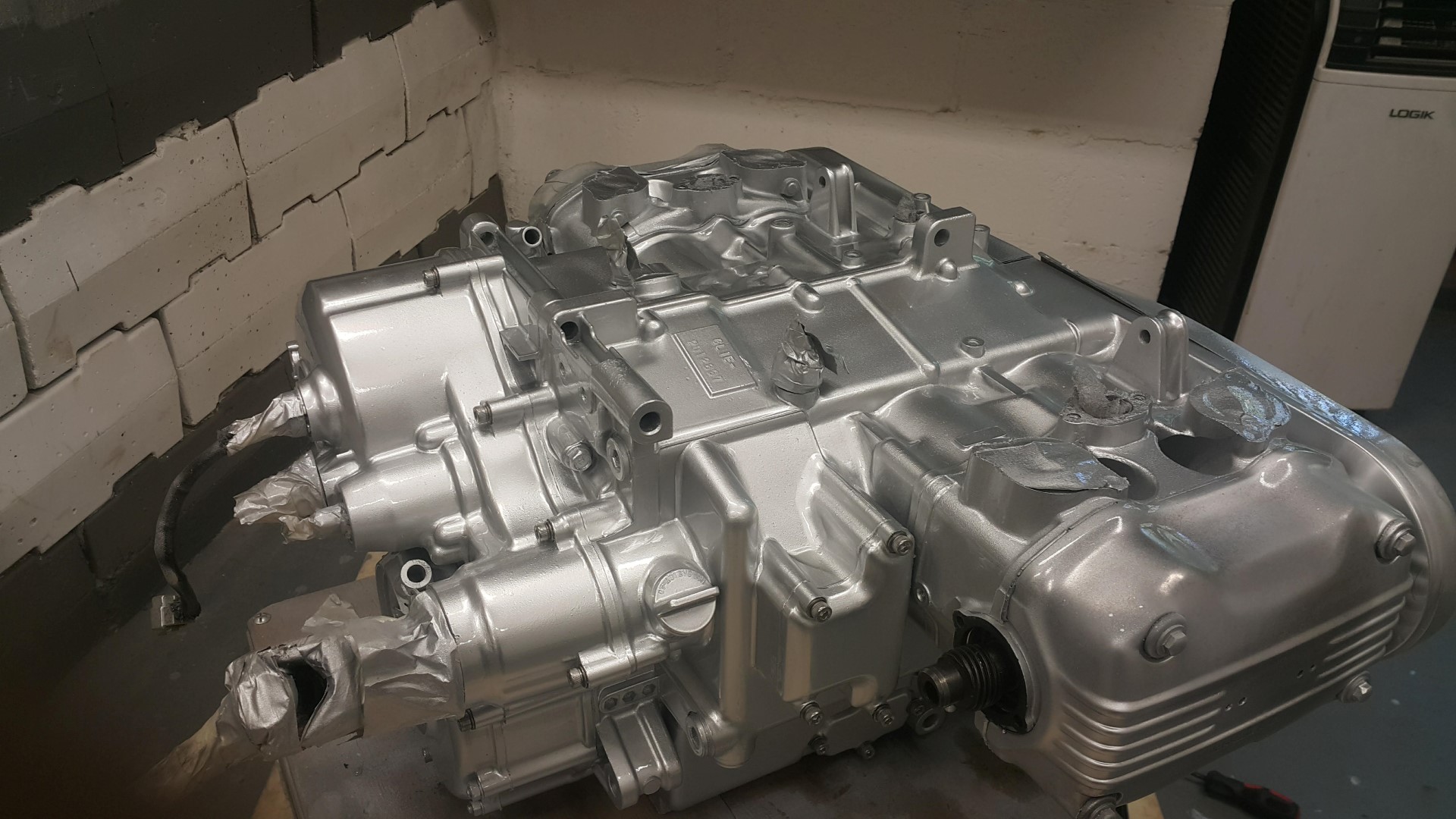 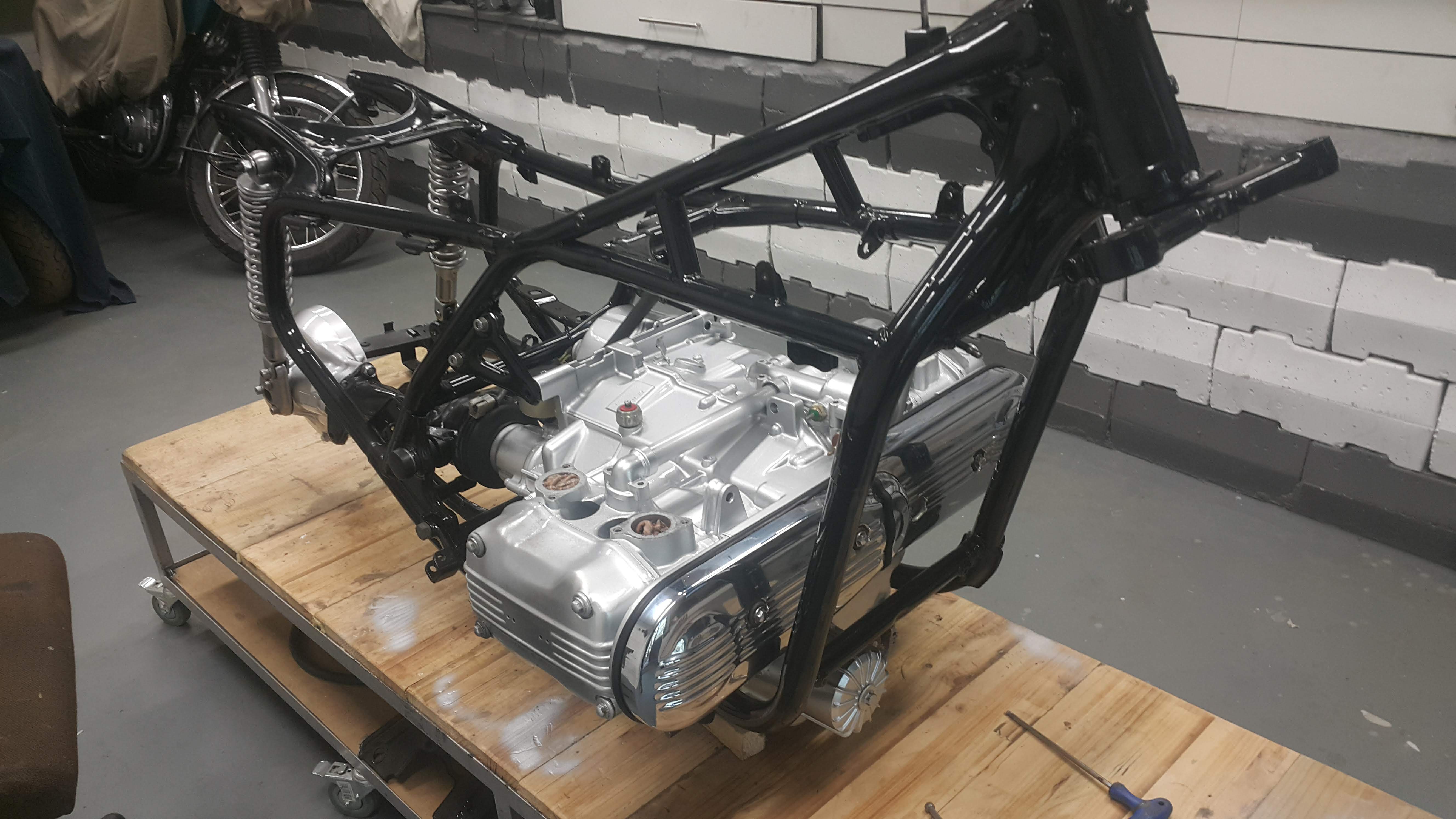 Polishing , a dirty job(some are brass plated for a bobber thing i have going on in the background), follower by VHT Clear 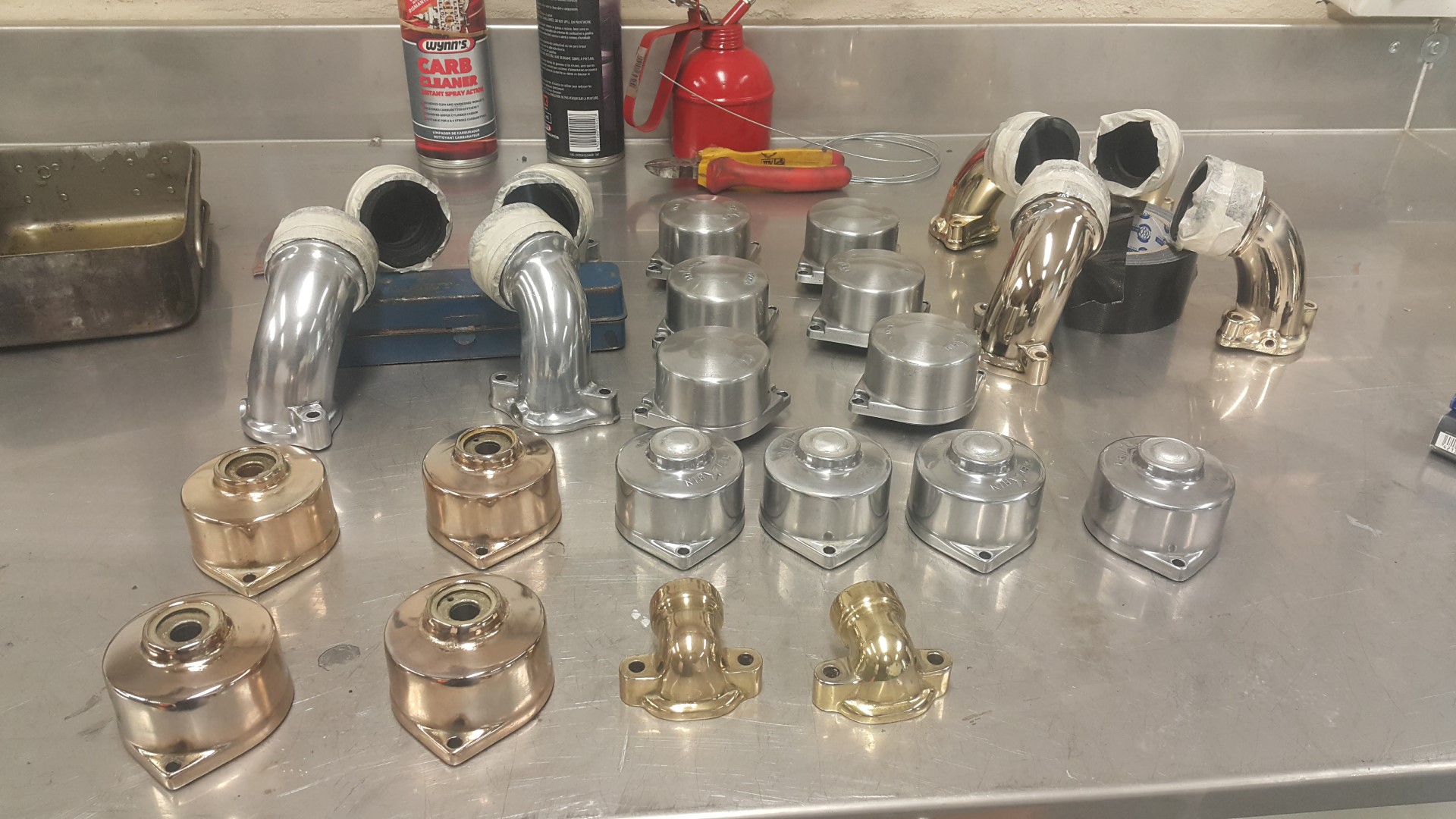 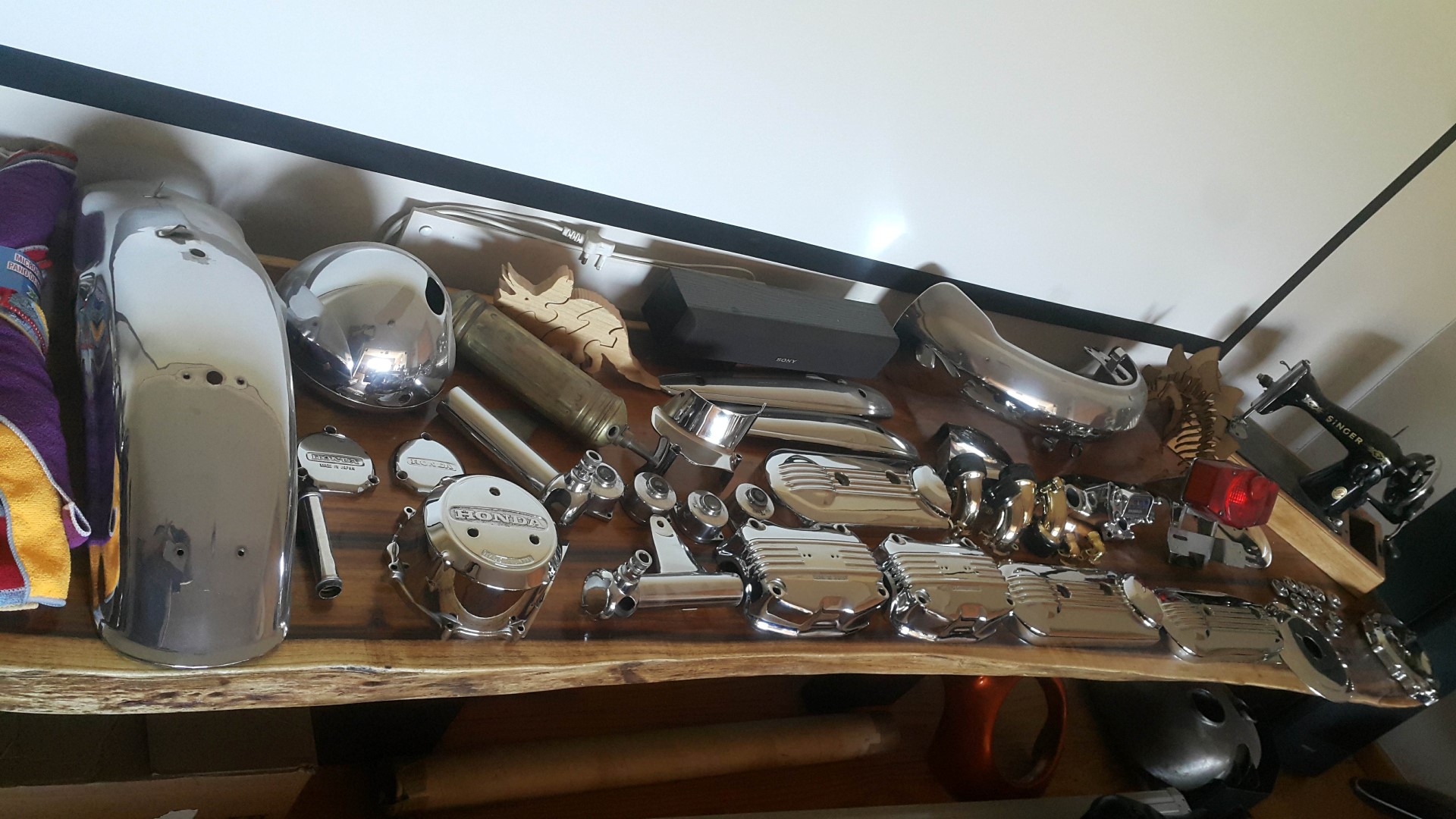 Zinc plating , this stuff is the BIZ and very cheap 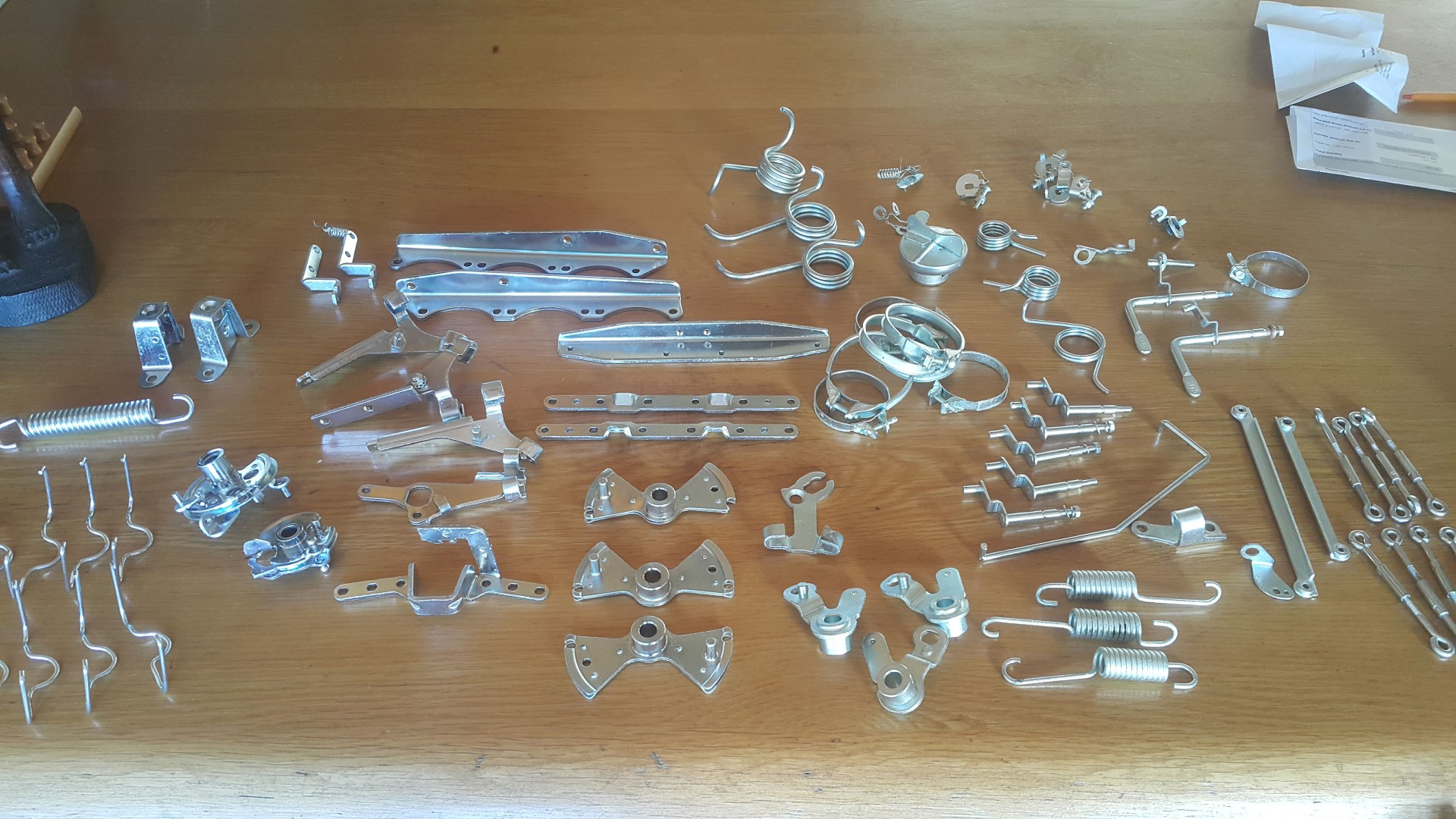 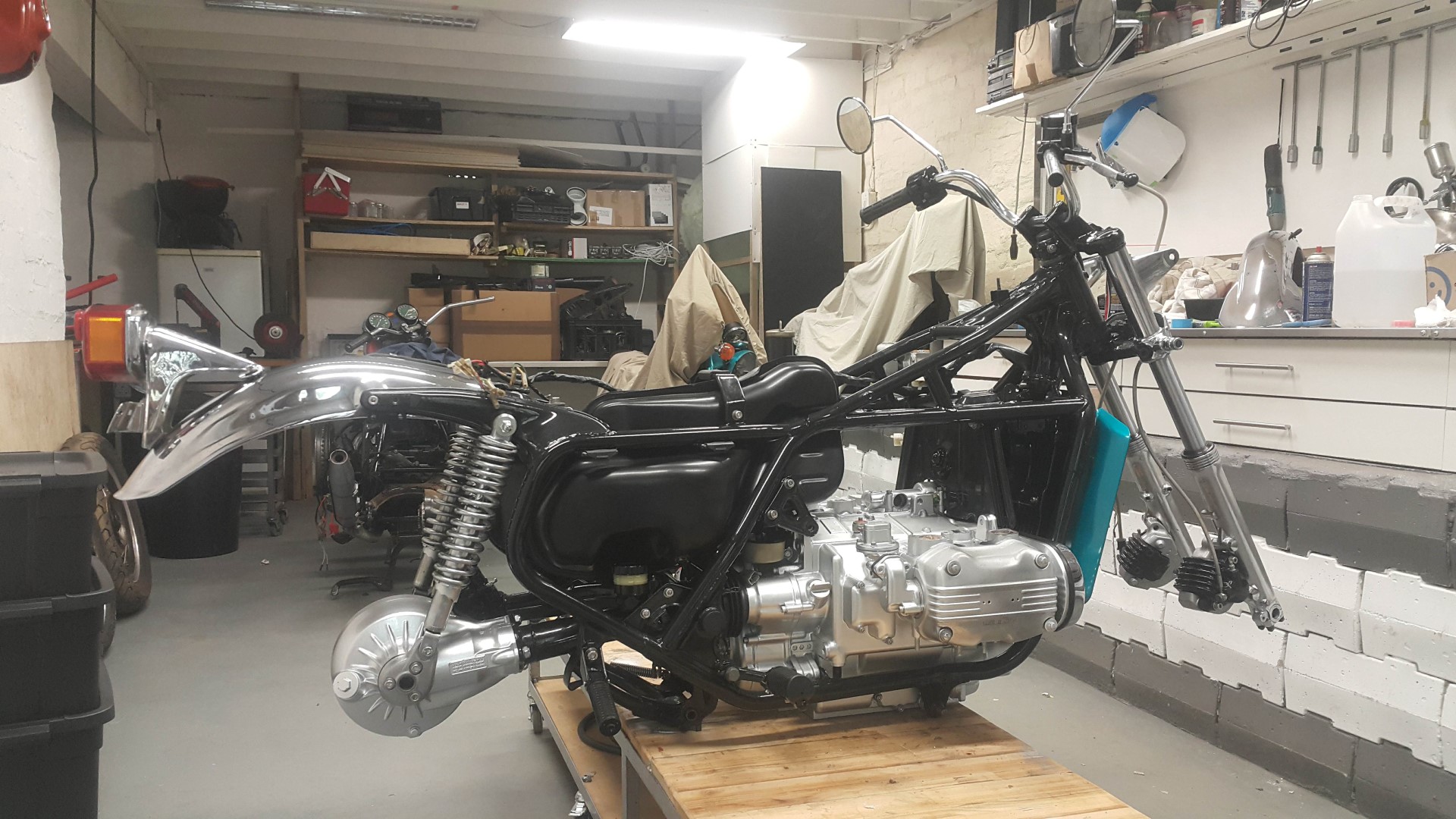 And thats it, she is pretty much finished. I took her for a spin today and unbelivably (for me anyhow) no oil leaks, no fuel all over the place , no fire (happened with CBX) or coolant pouring out. Idles, revs and goes very nicey

Stopping is another story....

Anyhow, again my thanks to everyone for having and contributing to these forums, i which i have spent MANY hours looking to solve various gremlins

beautiful job. You know you need to start a thread now about your bobber project..

I have to inquire. Are those items under your cabinets Gigantic LEGOs?

Keep your eyes and ears open and you'll learn something new, everyday.

RE: a thorough fuel tank cleaning
"And your carbs will thank you. They no longer live down stream from a sewage plant." -gregforesi

"I'd rather Ride than Shine" -RAT

i am also curious about the "lego" stuff.
Top

The lego... the whole house is on a hill...when i built the bike garage ,the lego blocks were put there to shore up the foundation ...because when i levelled the floor off, the foundation was a good half meter in the air... the bricks teeth interlock preventing movement

"Motorcycling is not, of itself, inherently dangerous. It is, however, extremely unforgiving of inattention, ignorance, incompetence or stupidity." - Anonymous
Top

Fabulous results from your metal finishing. Good call on going with the blue instead of the orange. How did you clean the rear shocks?
Top

You can puff out your chest, hands on hips -- Superman Pose!

Wow! I've only got one question...how'd you do that?

Now that is beautiful!!
Top

Agreed. Just today i had a coolant leak out the cap.