How to Re-key Locks

How to Re-key Locks 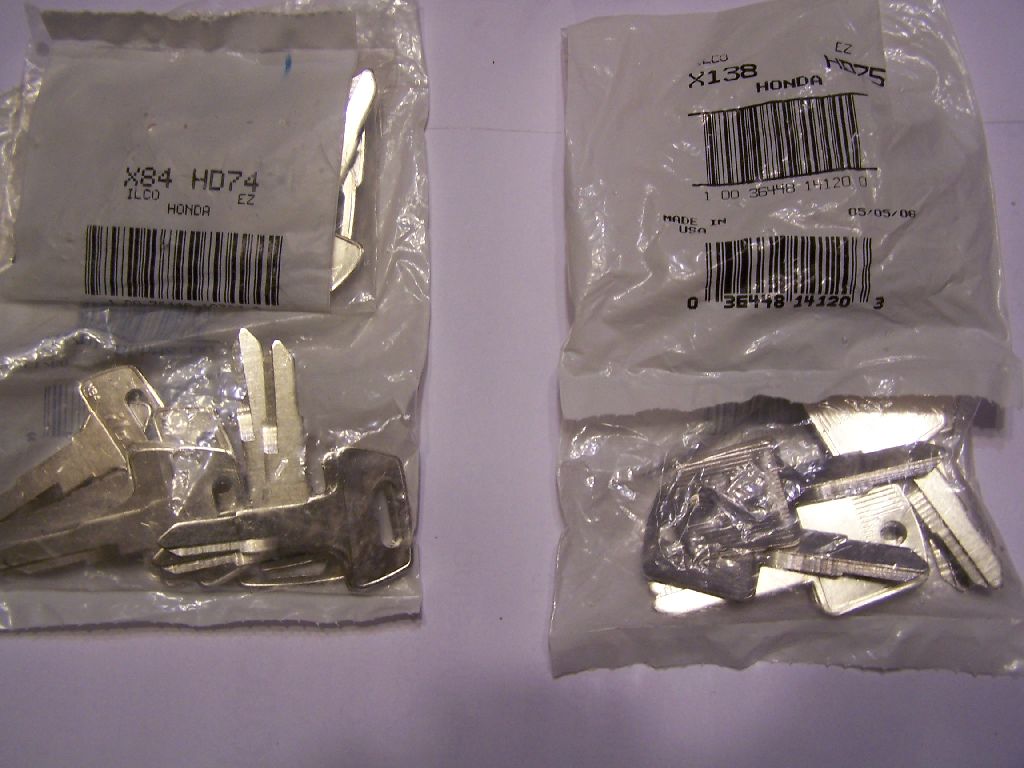 Keep in mind that rekeying a lock will make the key code on that lock invalid. You probably should obliterate it to prevent future confusion. I have a keying kit for Honda cars that the wafers work nicely in the Goldwing locks. 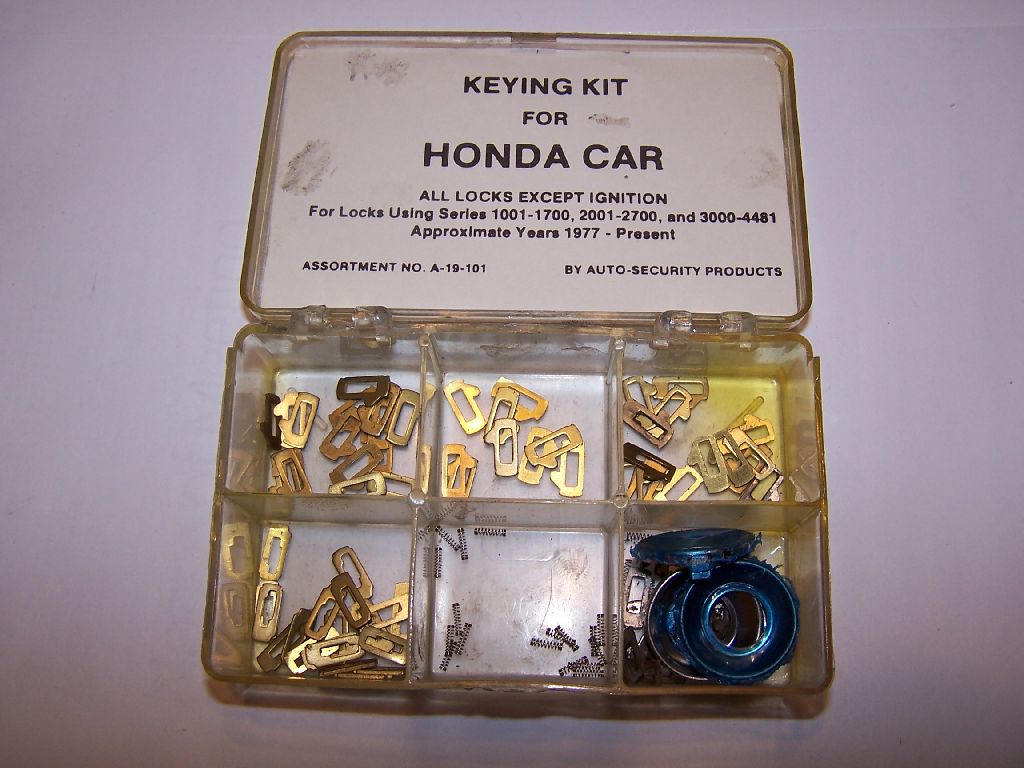 Starting at the end first the actually rekeying is fairly easy. I am starting with this first because the procedure is the same regardless of the lock being rekeyed. Disassembly for the different locks follows the rekeying procedures.

Insert your key and see how many wafers are already lined up flush with the edge. Remove the key and the wafers that didn't line up. Try the removed wafers in different positions until as many as possible are flush with the edge of the tumbler with the key inserted. In this case I got 3 to line up. 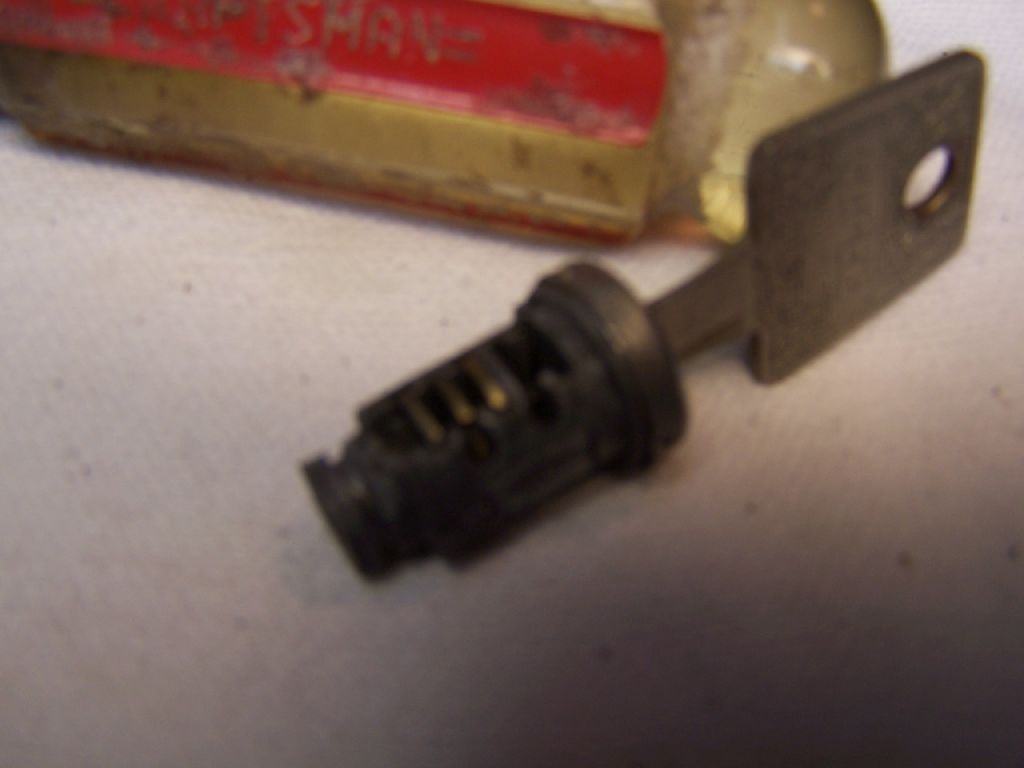 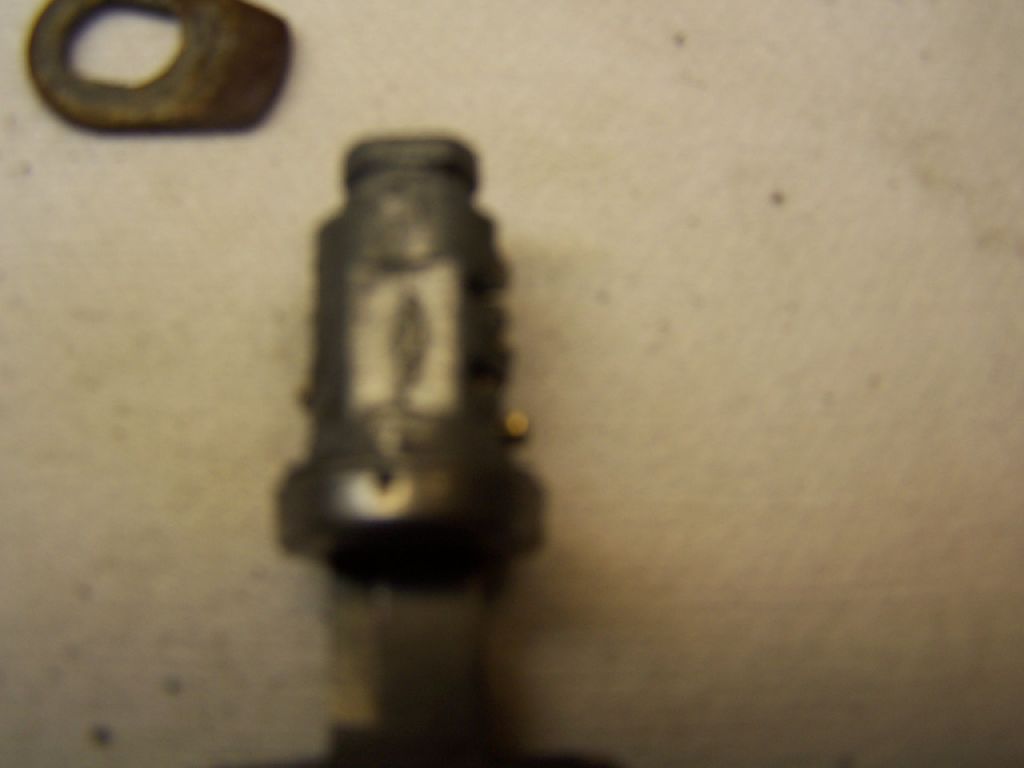 At this point there are several options.
1. Leave the wafers out but be sure to remove their associated springs so they don't fall out and jam the lock.
2. Replace the wafers with the correct ones from a wafer kit or a donor lock, if either is available.
3. File the mismatched wafers down until they are flush.
I have used all 3 methods over the years, and they all will work.
Remember to always exercise the lock with the key after reassembly and installation and before actually locking something. 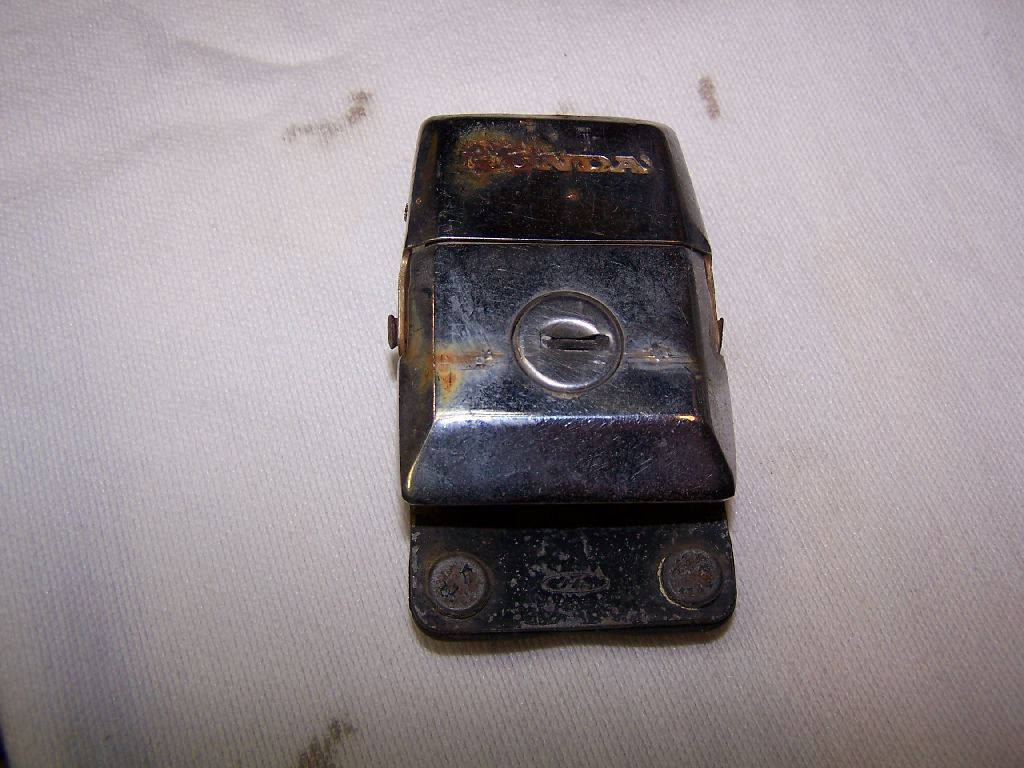 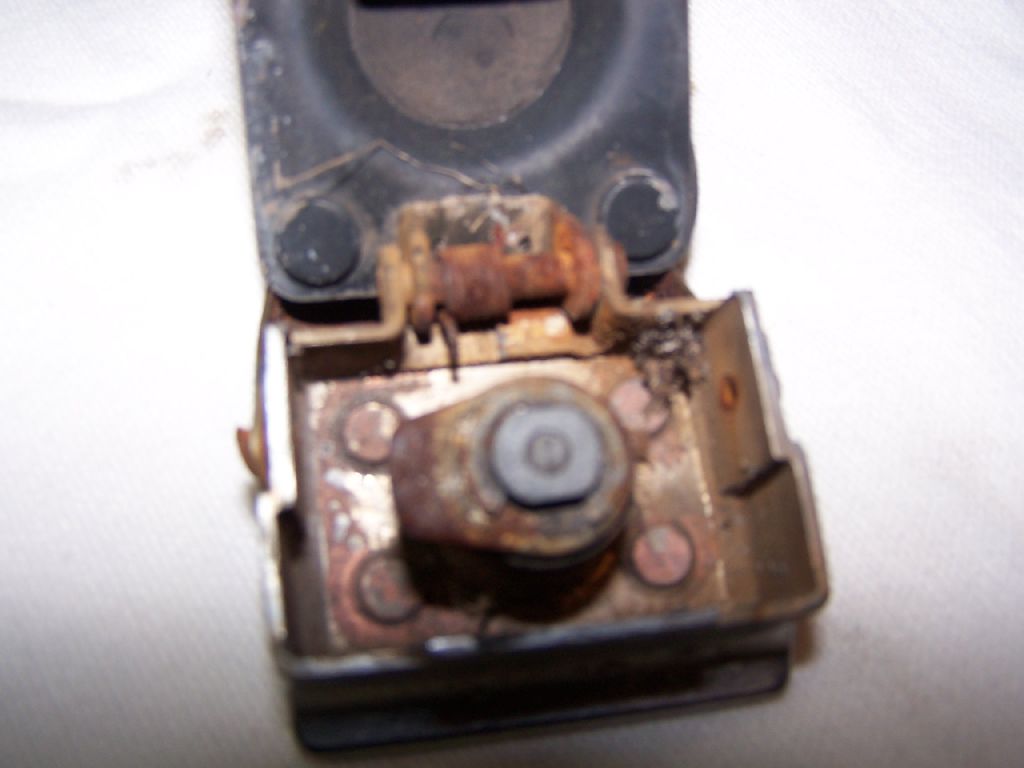 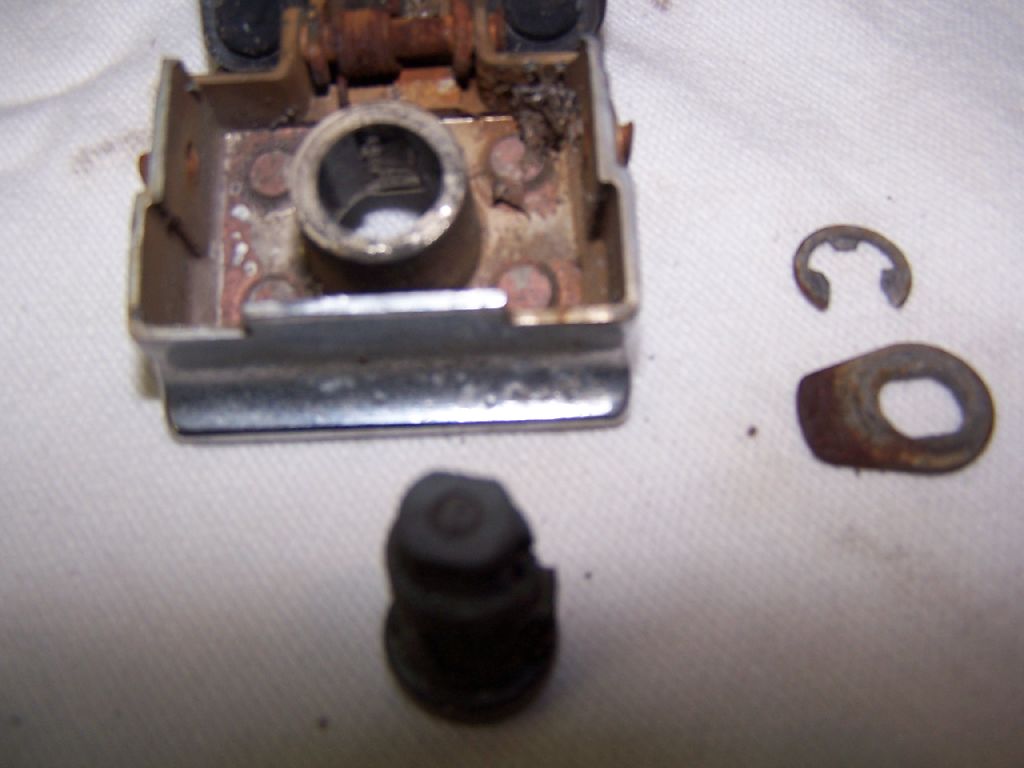 Remove the circlip from the back of the lock and the tumbler will come out the front. Watch the orientation of the parts so they can be reassembled correctly. Put together wrong the lock won't operate properly, if at all. 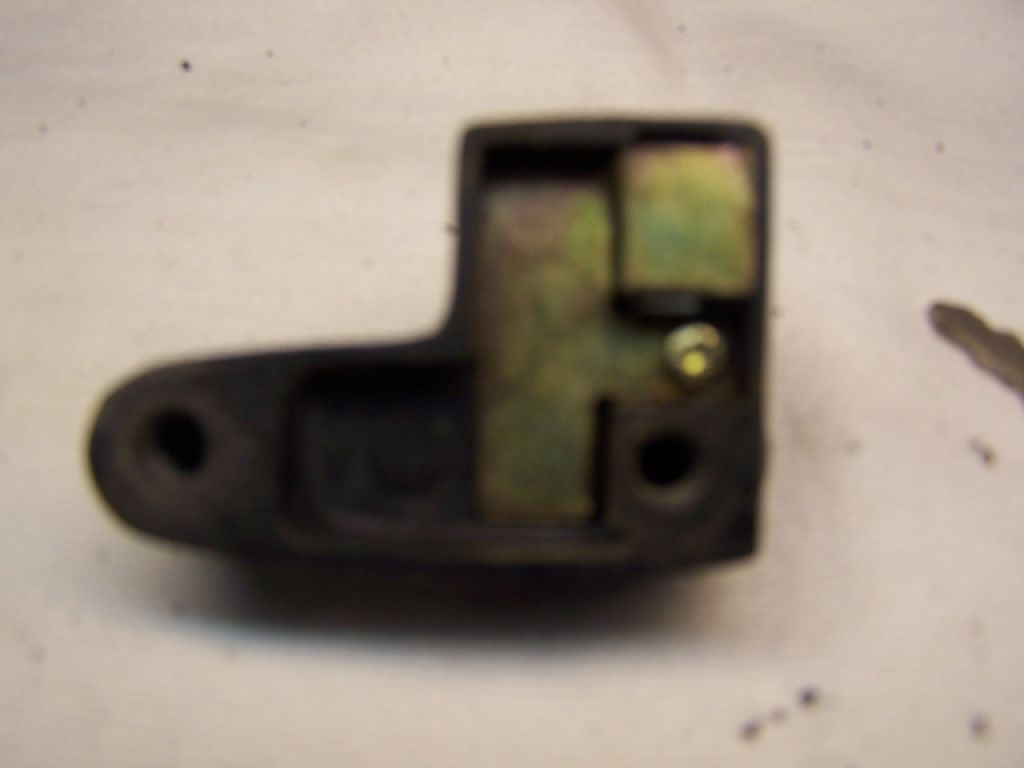 Remove the cover while pressing in on the helmet post. The post is spring loaded and will fly across the room if not held in place. 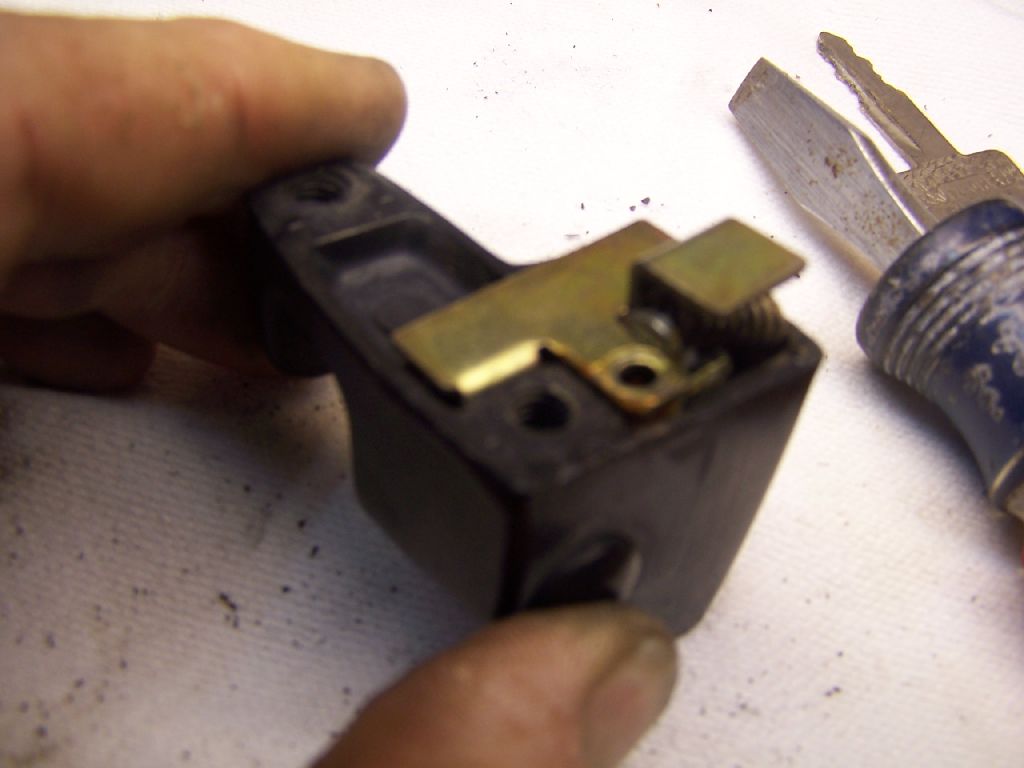 There is an extra wafer in the tumbler to lock the tumbler in the housing. Depress this wafer flush with the edge of the tumbler with a scribe or small screwdriver. While holding the locking wafer the tumbler will now come out the front of the lock. 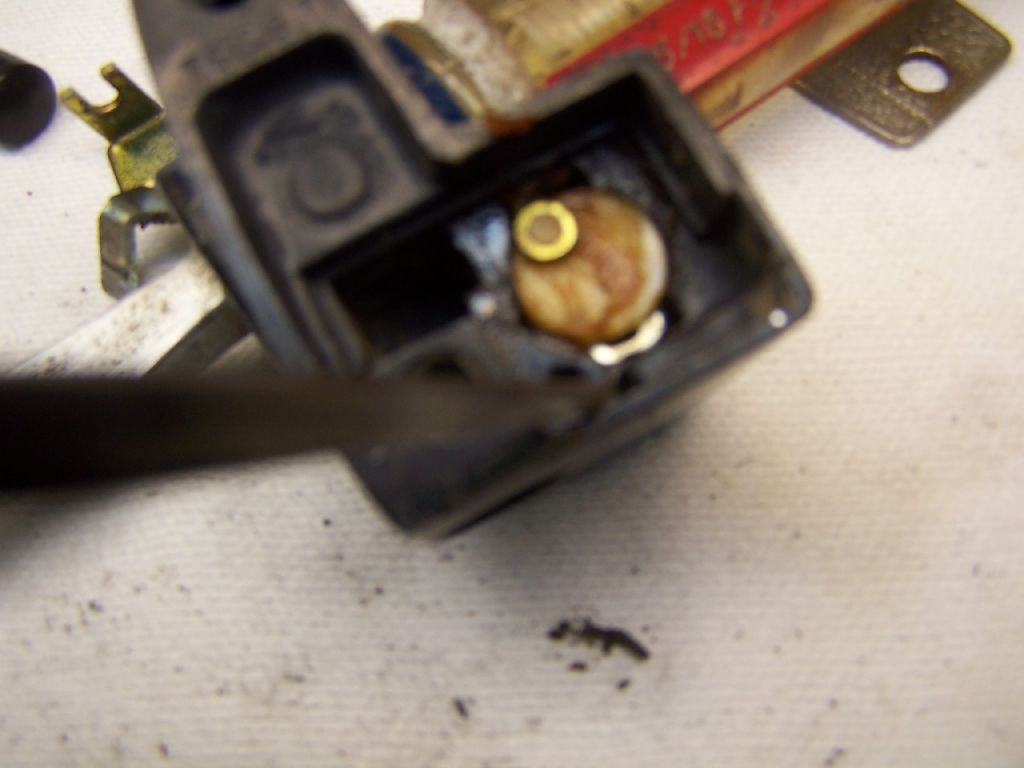 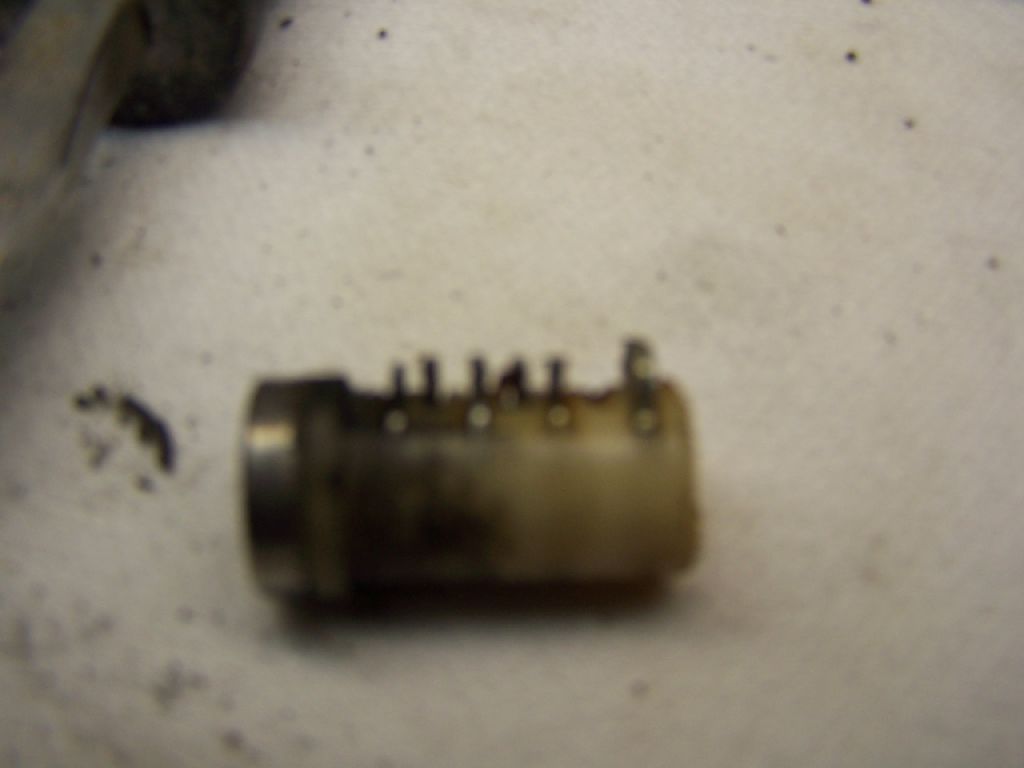 Again make sure the parts are placed right when reassembling. Don't misplace the locking wafer or the tumbler won't stay in. 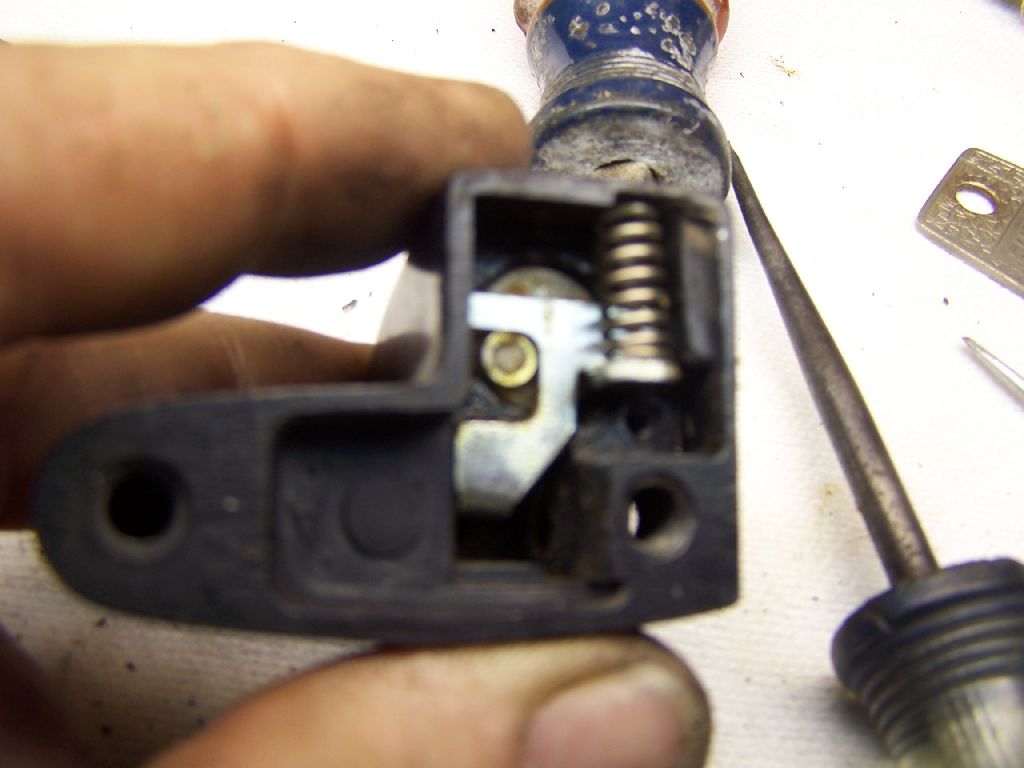 Again hold the helmet post all the way in while reassembling.

Remove the spring and strike. The small cam is held in position by the back of the tumbler, so the tumbler has to be removed with it in place. A circlip holds the tumbler in place and has to be rotated to a position so it can be pried out. The tumbler then comes out the front of the lock. 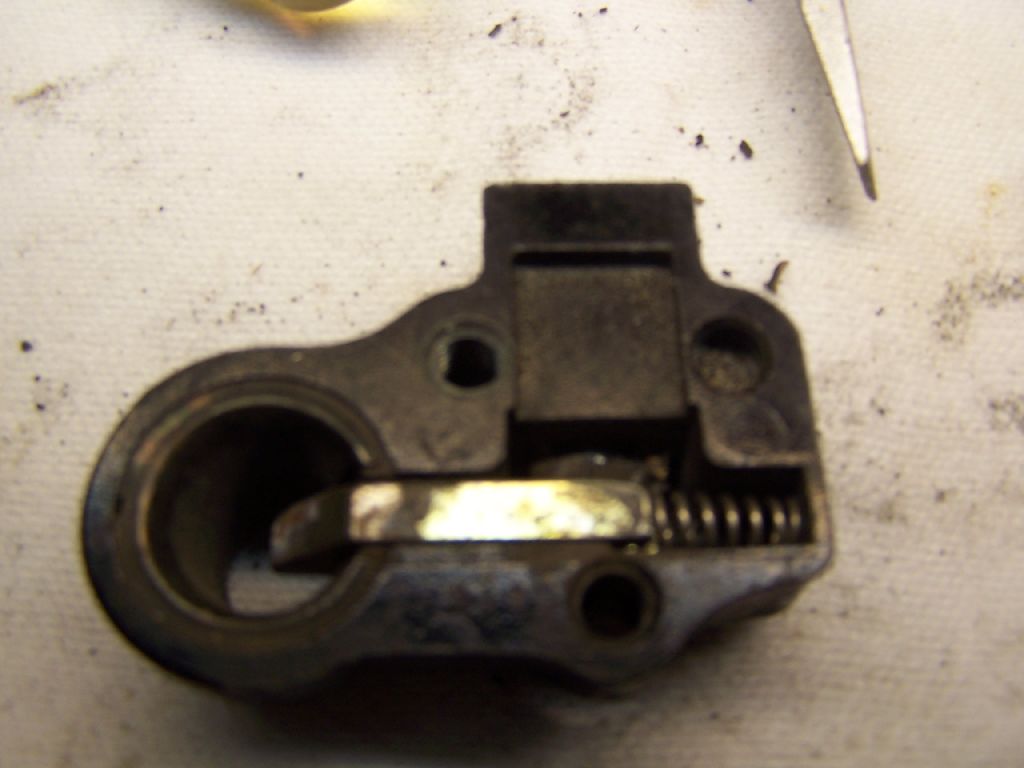 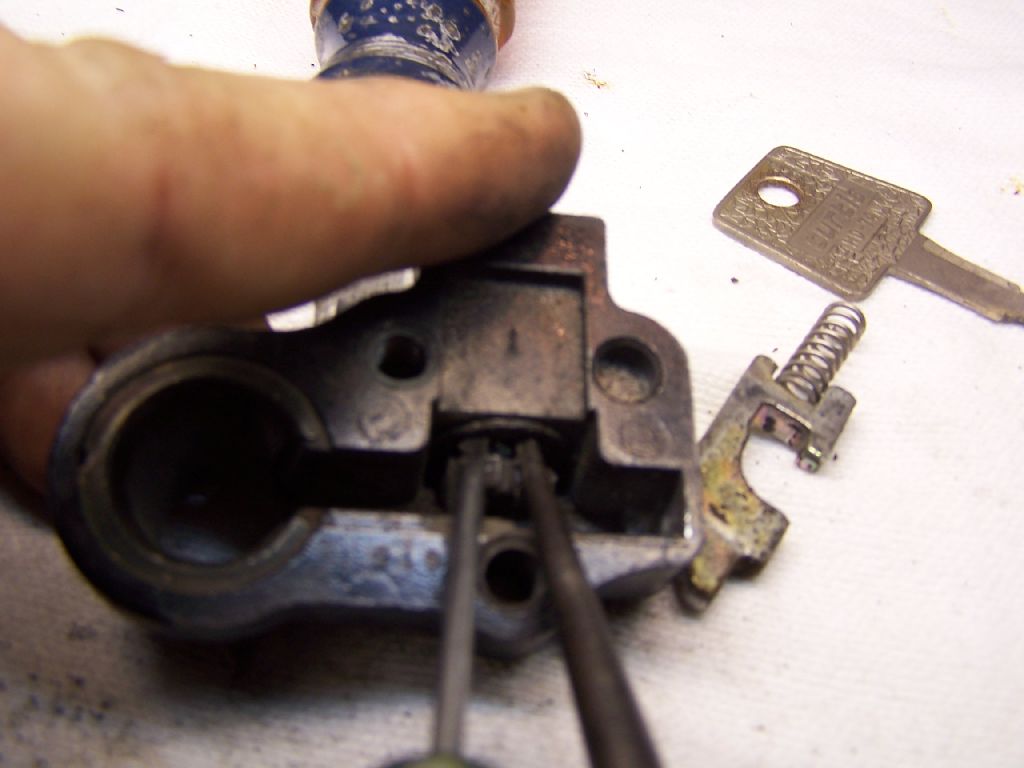 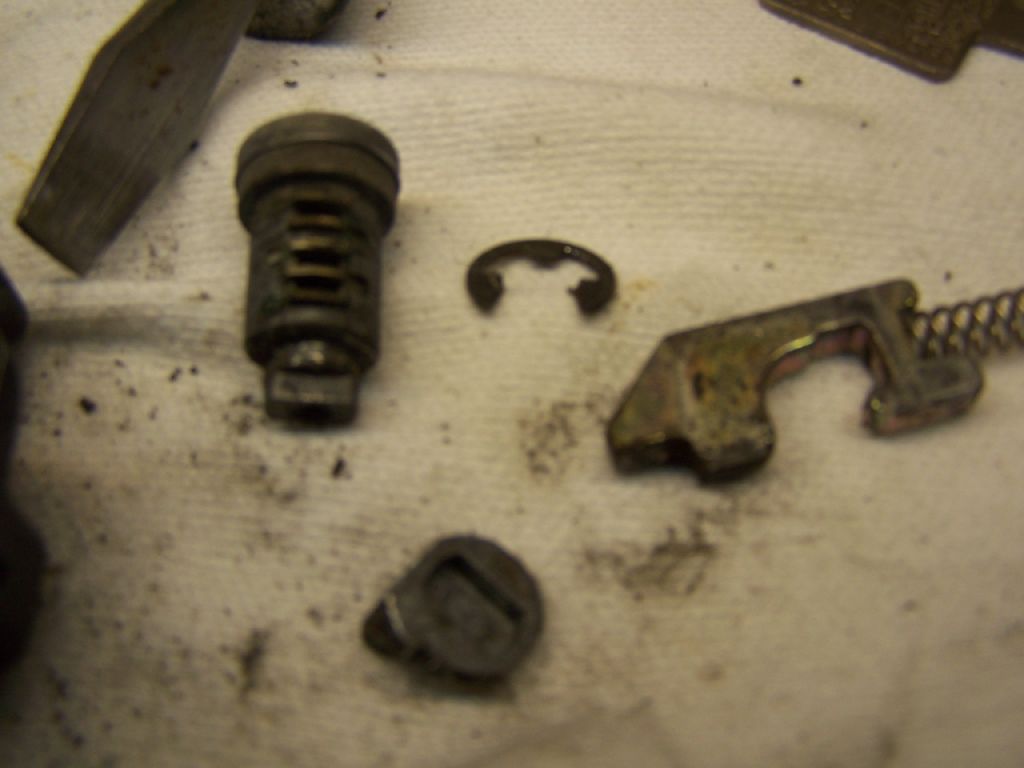 Once again watch the orientation on reassembly for proper operation. 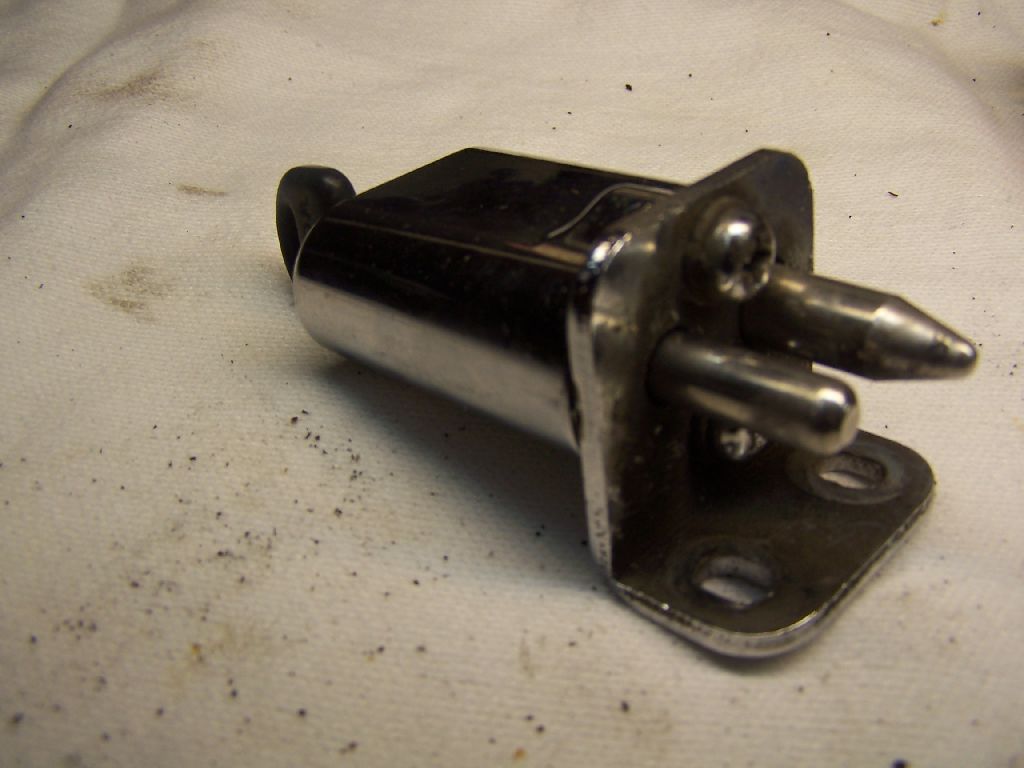 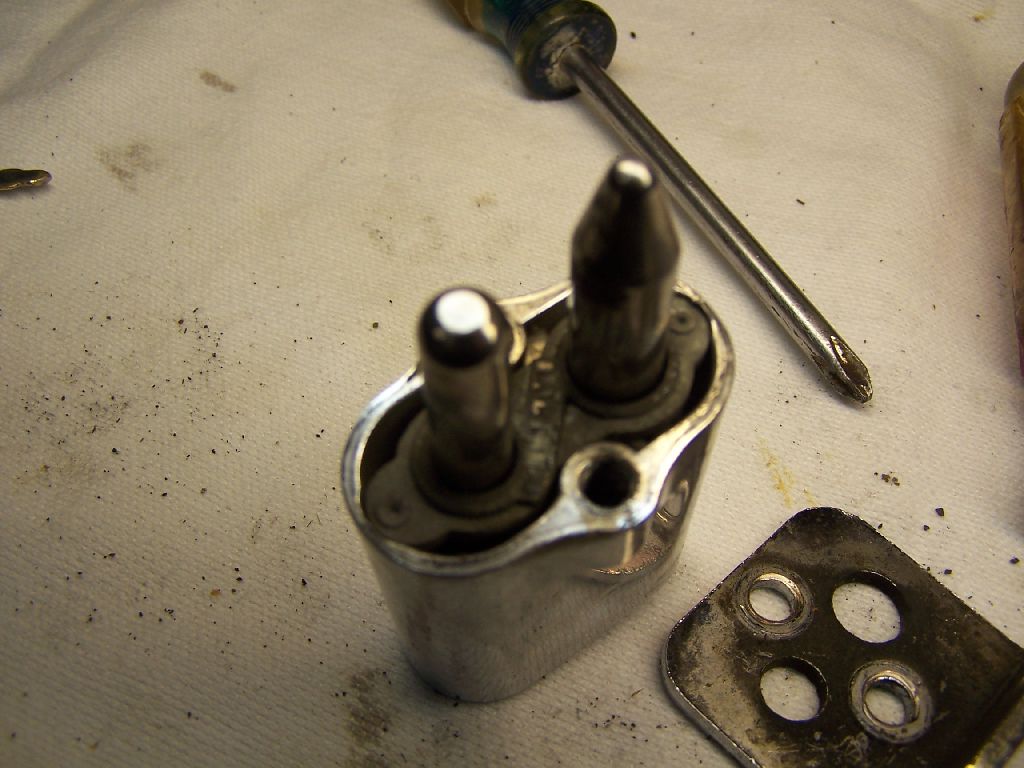 Remove the bracket from the back of the lock. There are 2 rivet posts holding the innards in the lock. Break them loose and the guts of the lock will come out the back. Again when reassembled the bracket will keep anything from falling out so don't sweat the rivets. 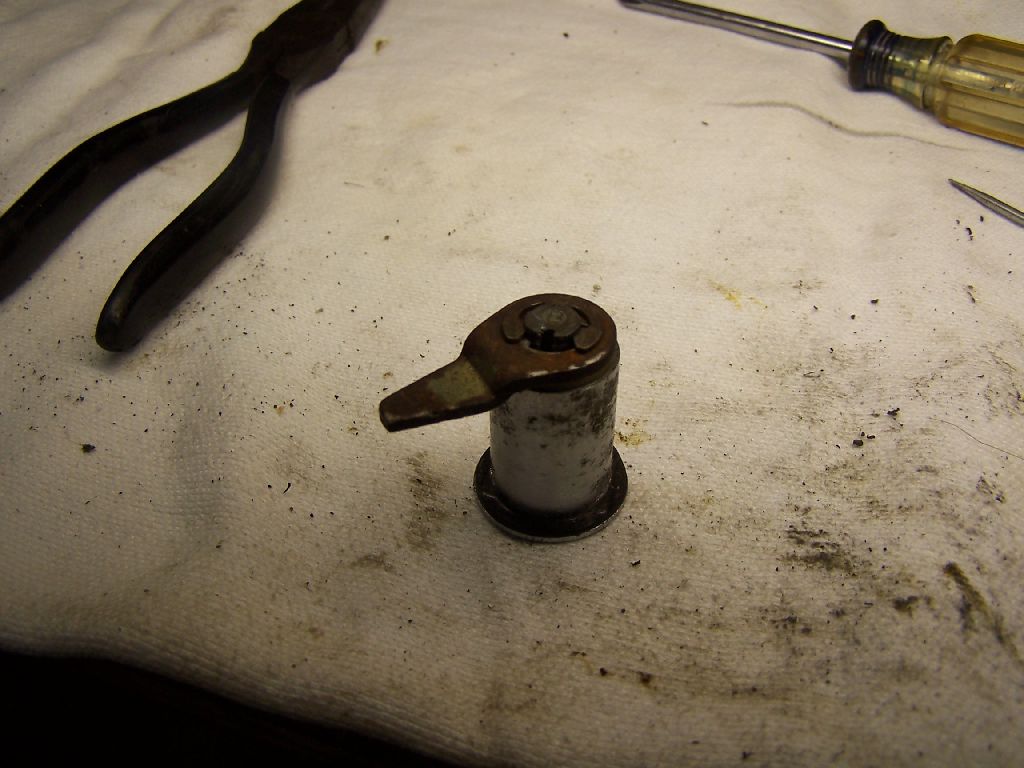 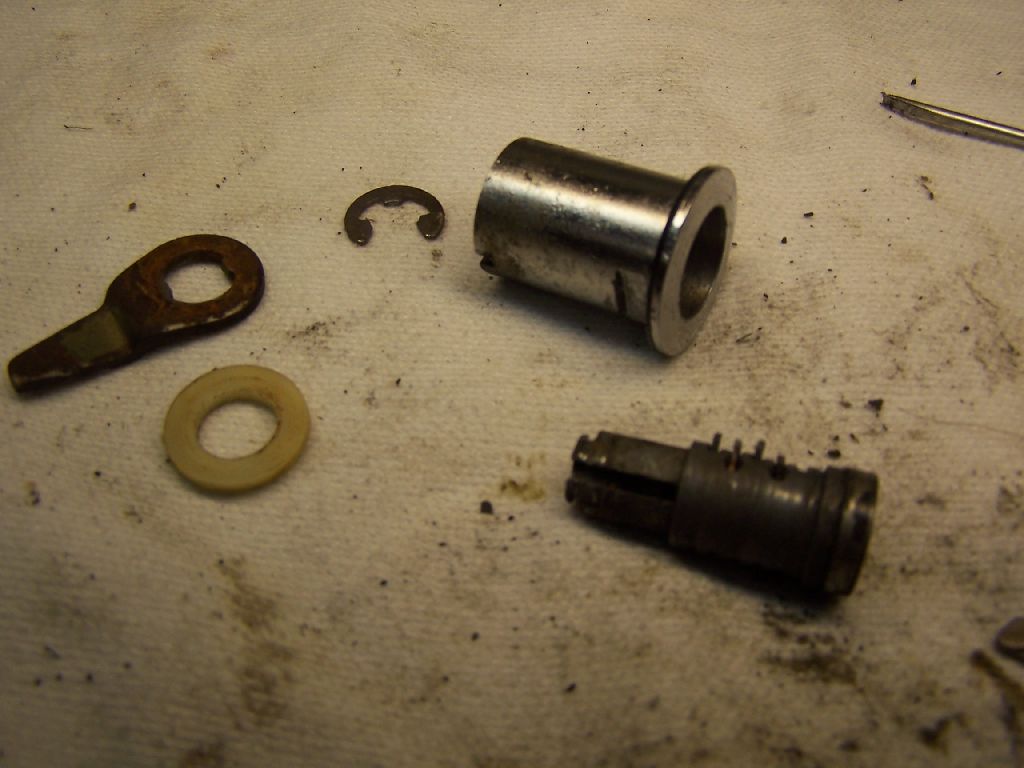 Remove the circlip and the tumbler will come out the front of the lock.

I have been unsuccessful, so far, with the following locks.


1. Ignition (destroyed the lock in the attempt) 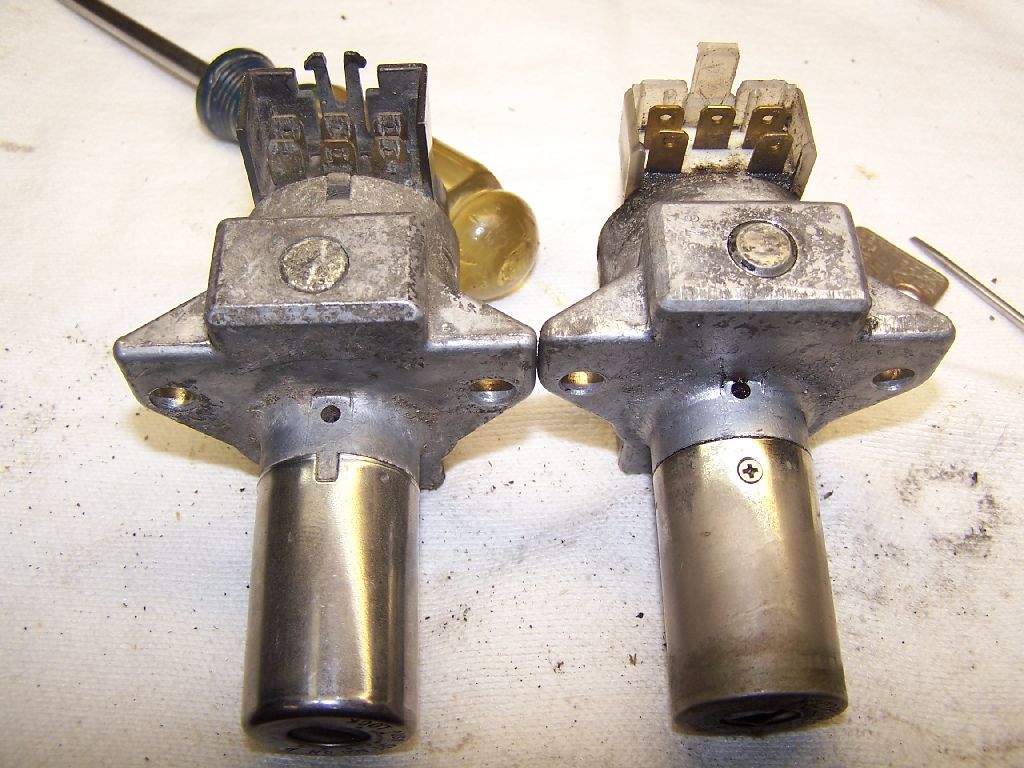 2. 78-79 Shelter lock (have 2 with no keys and need one now, so will probably be destroying one soon) 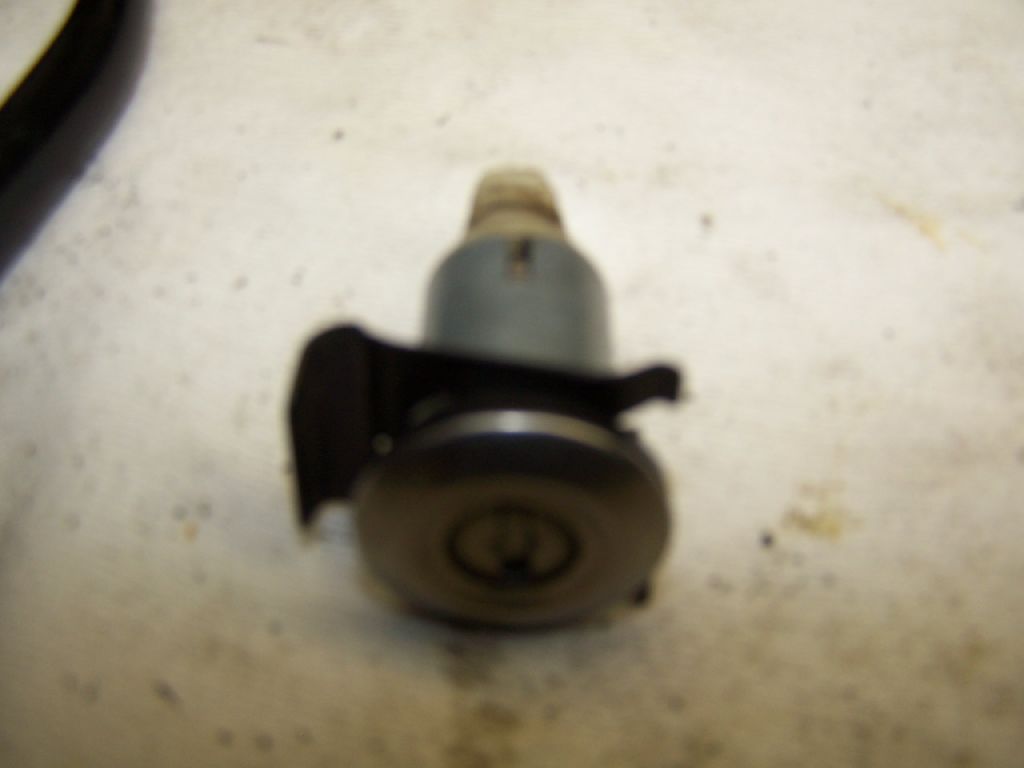 3. GL1100 Shelter locks (was able to do, but required prying the chrome ring off the front of the lock and I was not real happy with the cosmetic result. But the lock DID work)

So on 78 and newer try to have matched locks for the ignition and shelter cover. All the rest can be easily keyed alike.
"I periodically misspell words just to annoy the word police."

Thanks for the tips Ron. I've only done locks that had pins and it shows me that if I want to work on these I'd need wafers.
Enjoy life,
Cookie

Brant
Board of Directors

Thanks Ron- As per your suggestion in another thread, I was able to rekey the locks on my interstate bags to match the ingnition key on my 1100. Thanks again for the info.
83 GL 1100 bagger Ugly Betty
ALL WE WANT TO DO IS DRINK OUR ESPRESSO, RIDE OUR MACHINES, AND NOT BE HASSLED BY THE MAN
Owning a motorcycle is not a matter of life or death. It's much more important than that.
"Don't sweat the little things, guys, take care and appreciate all that you have around you!" - Fewman
NGWclub on Facebook
Top

confish86 wrote:Ron great write up & i do have one question , with the gas tank still in the frame , how would you get to the screws on the back of the helmet lock .

I assume you are talking 1100? 1000 is by the rear wheel. Needle nose vice-grip pliers comes to mind. I don't have one here to look at, but I do remember installing one without disassembling anything.
"I periodically misspell words just to annoy the word police."

confish86 wrote:Ron great write up & i do have one question , with the gas tank still in the frame , how would you get to the screws on the back of the helmet lock .

I assume you are talking 1100? 1000 is by the rear wheel. Needle nose vice-grip pliers comes to mind. I don't have one here to look at, but I do remember installing one without disassembling anything.

Hi Ron. dinking around with some locks here and noticed the codes have 6 numbers like 7RB115 reading from the key end and the locks have 5 wafers, Im trying to put a number 1 wafer in a lock taking it out of another lock where the number1 wafeer was in a differant slot. I can see any number on the wafers themselves. Anything you can add. Thanks JB
jbz........... Thinkin about sh-t too hard and You wont get anything done
Top

Ron, great write up. You just need to learn how to use the Macro feature on your camera

BlueThunder wrote:Ron, great write up. You just need to learn how to use the Macro feature on your camera

Amazing how the look fine on the camera's small screen and like crap when I get inside and post them.

I usually run a disclaimer.

First I am NOT:
1. a photographer
2. a writer
3. an engineer
4. a trained motorcycle mechanic

Nor do I play one on TV and I did not stay at a Holiday Inn Express last night.

"I periodically misspell words just to annoy the word police."

Awesome article, but where can you buy or aquire the wafer kit required ???

When the Power of Love
Overcomes the Love of Power,
Then and ONLY then
Will we find peace.
Top

Got mine off eBay.
"I periodically misspell words just to annoy the word police."

This looks like it should work for the 1000 also. Correct? I want my shelter/helmet locks to match my new ignition key.

Roncar, you said you got your kit on Ebay...any other source?

egelasi wrote:This looks like it should work for the 1000 also. Correct?

Remember, Honda used 2 different keys. One has an exact opposite profile of the other. If your key you want to use will not physically fit in the lock you want to key it to, can't be done (at least not easily.)

There are other places to get the kits, but, 1. they want more than I'm willing to pay, and 2. most are companies that prefer (only) sell to locksmiths. eBay sellers don't care who they sell to.

I have seen more than once where a kit is not needed. Just rearranging the wafers changes it to the new key. If your ignition key will fit in your shelter lock, take the shelter lock apart (it's the easiest) and see of they will line up by moving wafers around. If it works then the helmet locks will too.

BE VERY CAREFUL OF SMALL PARTS. They are easily lost.
"I periodically misspell words just to annoy the word police."

I sent you a PM but you answered part of my question with your post.