Big thanks to brother John / Old Fogey for sending me a pack of stem seals, so thought I'd write this by way of a 'share'. It's quite an easy job, looks far worse written than it is to do...!

Valve spring compressor, the type that hooks into the springs.

And a way of filling the cylinder: you can do the old school rope trick of stuffing nylon rope into the chamber, or use compressed air (which I did).

I couldn't find any 12mm adaptors to buy, and anyway this cost Ã‚Â£0 as the bits were lying around, which is my all-time favourite price especially for stuff I'm not likely to use very often.
Batter a spark plug with hammer & chisel to crack off the top ceramic part. Drill out the rest (hammer action), trim off the electrode, hollow out the plug.
Weld an air hose adaptor to a steel tube, along with a nut, so the thing can be tightened (or you could weld t-handles). The plug body gets welded to the other end of the tube of course.

A fair bit has to come off but it is easy stuff. I preferred to leave perfectly OK heads where they were, and save the cost of gaskets etc. Not to mention I'd be forced to clean and smooth the ports, lap valves, and consider swapping in earlier cams, and so on... Avoiding that path of temptation made much sense for me.

Drain coolant, and get the rad off. You'll have your own ways but I undo the top hose off the engine housing, and undo the lower housing so the hoses stay with the rad. Seems easiest.
Put the crank to TDC on #1 (T1 mark aligned).
Remove the front timing belt covers.
Loosen the belts in the normal way and remove the outer pulleys. Reason for this is that the inner belt covers must come off, because one LHS one has a bolt going into the rocker block, and also the gaskets will be mangled when removing the rocker blocks.

Put the bike on a centre stand, in my case I'd removed it, so axle stands did the job. Reason for this is that the exhaust valves point downards, and reducing that angle helps a bit with fiddling with the valve collets later. Here's a pic showing the pointy end...

LHS first:
Remove the engine-side timing belt cover, which the camshaft is poking through. You'll need to buy or make a new gasket for that.
Remove the valve cover.
Carefully undo the 6 rocker block bolts, I did a diagonal pattern, bit at a time, just in case - don't want to warp this. Remove the rocker block.

I left the cam in place, and just held the forward end up with a bungee to stop it flapping about.

Now the pressure on the valves is released, and they're all closed.
Mount the air adaptor into a plug hole (or do the rope thing). Hook up the compressor and let it fill up. You want about 90-120psi roughly, just enough to keep the valve pushed closed is all.

I used a telescopic OSM ("Oh Sh*t" Magnet) to get the collets out, sometimes wiggling the spring a bit to give space. One did ping across the floor, where one of the garage monkeys stole it, never to be seen again.

Withdraw the tool/spring as a unit.

Remove the old seal. Mine got destroyed doing this, had to get fairly medieval on them.
The new ones slip on very easily.
Back on with tool/springs, and now the fun starts...

You might have your own way, but I did this:
Tilt the tool/spring to give room around the valve stem where you want the collet to go. Stick a collet onto the OSM, and poke that into the retainer. Poke the collet off the magnet with a screwdriver. Then move the valve spring/tool to hold the collet in place. Do a similar job with the other collet.

For this stage that extra arm that Ma Nature or a dubious family history gave you is very useful. Or a tame fully garage-trained chimp. The chimp's better, he can also manage the beer fridge.

Undo the tool. I like to poke the collets a bit, or mood depending, put a piece of wood on the valve stem and give it a tap. A sturdy tap. To help seat the retainer/collets. Makes me feel better anyway.


RHS:
Undo the outer 10mm bolt on the fuel pump block - or remove the block completely.
Remove the rocker block as before. The cam wanted to stay with the rocker block, who am I to come between such close friends, I left them be.

The rest is as before.

The rocker blocks want about 20lbs torque on bare threads, so a bit less if they're oily.

Oil up cams, rocker pads, bearing surfaces and of course make sure they're clean. I used cam assembly lube because I had some, otherwise oil would be OK.

Throw the other stuff back onto the engine, remembering to turn it over a couple of times on the 12mm rear bolt and then do the valve clearances. I'll do them again after one engine run-up too.

I made gaskets using kiddies' blue waterpaint to get an imprint, a scalpel, and I have bits of tube sharpened up on the bench grinder as a hole punches, an old air fitting likewise, for different size holes.
When punching a hole put a piece of card or another bit of gasket paper under the target piece. Tap the punch with a hammer, and it'll punch a nice hole out, much better than a single layer on a hard surface. Use proper gasket paper. You can make gaskets out of normal card sometimes and get away with it, but proper gasket material is dirt cheap.


Hopefully this will eliminate the smoke puffs at start up that sometimes happen; I reckon sitting still for 9 years does no-one any damn good and the poor bike's the same.

(PS - my carbs are off, but they don't need to be for this job)
Black Wing build thread
Top

(particularly liked the use of the bungie to hold the left cam!)
"Impossible Is Just a Level of Difficulty!..."
If I'd wanted you to understand, I would have explained it better! (Johann Cruyff)
I’d give my right arm to be ambidextrous!

Very good Posting. I want to do mine as well. It uses oil and I'm hoping this will help. Compression is 150 all around but always fouls #4 plug. It's an 83 1100. Does this sound like it may help me?
Hi from Alberta
Top

ALSO... Do I need to turn the motor over to get the other pistons at TDC when I do their valves?? Thanks
Hi from Alberta
Top

Yes.
You need to do each cylinder individually, with it on the compression stroke so that the valves are shut.
"Impossible Is Just a Level of Difficulty!..."
If I'd wanted you to understand, I would have explained it better! (Johann Cruyff)
I’d give my right arm to be ambidextrous!

Nice write up Alley Cat, this one is heading into SHOPTALK!
I found the end of the internet

Hello Sunbobb, that's nice 8) Hope it helps someone out.

On the crank thing, at each position you can do more than one valve, like when setting the clearances kind of thing.

On the oil draw, it made mine smoke at start-up. That could also be worn guides, or valves need lapping in. I did the above as a quick-ish thing (avoiding temptation to mess with cams and heads, plus cost of heads off etc). The seals were rock hard. It did make a difference but ideally the heads on mine should've come off for a bit of a sorting-out.

I also ran some Redex through, both in the fuel tank, and via a syringe shoved into the ports in the inlet manifolds at tickover - engine sucks it in, no need to force the injection. This was a bit hopeful, that the Redex would do a bit of de-coking. Can't say if this made any difference as the bike was sold at that point.

Hope everyone at NGW is well, cheers all

Hey Sunny, you been beaten too it!

It's already in there under 'cylinder heads'
"Impossible Is Just a Level of Difficulty!..."
If I'd wanted you to understand, I would have explained it better! (Johann Cruyff)
I’d give my right arm to be ambidextrous!

Where in the UK can i get the valve spring compressor please?
Top

Why does the coolant have to be drained when doing this? Also, I was considering doing the rocker shaft swapover so presumably if one removes the rocker shafts a la Old Fogey posting, all the valves are exposed (and shut) and can be done in one go? Or have a I missed something please?
Top

Could you not just remove the rocker shaft and rocker arms, providing you remember which position each was from? This would allow you to keep the camshaft in, with no need to make new gaskets.

Thanks for the tutorial

With the help from your instructions I was able to get this job done!
A note to those as lazy as me~ I was able to get it done without dropping the radiator/coolant, and removing belts. The bolt behind the left cam belt pulley (whatever it s called) can be reached at a slightly cocked angle with a deep well socket. 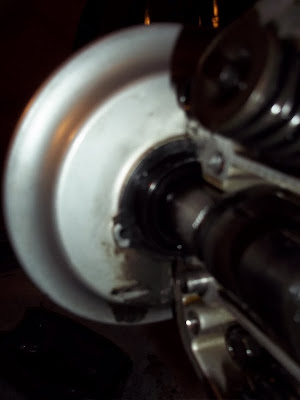 This photo stinks, but I was trying to show that I got lucky, and the only damage to the gasket is the outer section outside the bolt hole, which didn't concern me too much, in comparison to my laziness.
On the RH side I only removed the rocker arms and shafts as toehead suggested, keeping the gasket intact. That did make using the spring compressor more difficult though, with the aluminum block on there impeding movement. I found you can rent a difficult-but-usable overhead spring compressor from O'Reily's auto for free!
Agiin thanks for the tutorial, good luck to future mechanically-people
1977 GL1000
Top

Thanks for the great write up on replacing the seal with the head on. But I would like to add one step that will save allot of time.
Instead of leaving the bike on the center stand lay the bike on it's side. With the bike laying on it's side you let gravity help you out when you have to reinstall the valve spring keepers. With the bike upright it's really difficult to install the keepers because gravity is always fighting you before you can get the keepers in position. With the bike on its side gravity is working with you so you can place the keepers properly with out them falling out.
But before you do that make sure you leave the valve cover on the head on the side that will be facing the ground to prevent all the oil from draining out.
With the bike on the center stand it took me several hrs to replace the seals on the LH side . But with the bike laying down it took me about 1 hr to replace the seals on the RH side.
Dave D.
84 1200 GW Std
02 1800 GW
Top

A simple tip on the spring retainers: put a dab of assembly grease (or regular grease if need be) on the retainers and put them in place. The grease will generally hold them until you release the spring compressor. My 2 cents...
"I have no special talent. I am only passionately curious." - Albert Einstein