Valve seat work is somewhat foreign to all but the career tech, so the audience for this article may be small. Those readers who consider themselves knowledgeable will likely be familiar with the Neway valve seat cutter system, but perhaps not even with that--maybe only with valve lapping. Following then is the current landscape of valve seat refinishing technology. For the most part, this examination will be limited to the more affordable, hand-operated equipment.

Valve seat refinishing is necessary because when a valve begins to lose its seal due to wear, the seat (in the cylinder head) has worn also and must be given attention. Seat wear takes the form of a widening of the seat's sealing surface, unevenness, pitting, and in many cases, a heat-induced very slight misalignment of the valve guide-to-seat orientation. The problem is, lapping the valve and seat, which rubs away metal from both, does not correct any of these flaws, not even the pitting, the very least of them. Worse, because the valves are usually receded, that is, exhibit a wear ring around their sealing face, lapping is actually counterintuitive as it serves merely to accentuate that ring. It doesn't fix it. There is therefore no good reason to lap valves, no matter how much the practive is endorsed or by whom. Lapping, whether by itself or as one of many steps, is not a valve job. The seat must be refinished-- i.e., remachined.

And here is where the subject gets very broad indeed, because there are many different kinds of valve seat refinishing tools--some good, some excellent, and some, like the Neway system, hardly worth mentioning. 1 The Neway carbide rasp-studded valve seat cutter is probably the best known and most widely used, but it is also the worst possible solution. Though a number of things can be said against it, the Neway has two very glaring faults.

First, the Neway cutter rotates on a pilot (shaft) that is pushed into the valve guide and is fixed, or "dead", that is, it does not rotate with the cutter. Because the pilot does not rotate, a means of achieving truly accurate centering is forfeited. This is significant and is a fault that plagues many of the older, traditional hand-operated methods. The old-time Sioux, Black and Decker, Kwik Way and others all use dead pilots. 2

Second, and more importantly, the Neway system, though as with all refinishing methods it depends on the valve guide for location, also unfortunately depends on the guide for loading. Location and loading are two different but equally important things. 3 Location is how the tool finds the correct angle of approach. Loading is simply how the tool is locked into that position. In the Neway and several other systems, both location and loading are done at the guide; the cutter's position is held by only the guide. The guide is the bearing in the operation. This is a considerable deficit, because a valve guide has a built-in clearance to its valve of 0.001-0.002 inch. While accurate enough for locating, this is far too sloppy when it comes to loading. The cutting force inevitably tilts the cutter head out of true with the guide, and thus with the valve seat. Worse yet, if the valve seat has heat-shifted, which is the case often enough, the cutter is even more divergent and cannot correct the bad seat. With no immovable loading point, all the cutter can do is conform to the seat. The seat will be cut, but if crooked it will stay crooked. 4

The solution then is a cutter which locates on the valve guide but does not bear on on the valve guide. To do that the cutter has to bear on the head itself, that is, find purchase on the head's gasket surface. This is what all of the best valve seat refinishing systems do and it is what has made Serdi and the other brands that mimick it so successful.

To summarize, live pilot is superior to dead pilot, and head-loading is superior to valve guide loading. Neway, Sioux, Black and Decker and Kwik Way are all dead-pilot systems. It doesn't matter how elaborate, how large, or how expensive the equipment. If it is dead-pilot it is a 100-year-old design and obsolete because it does not accomodate real-world valve seat issues. Honda/Kawasaki (Kowa), Serdi, Mira, Hunger, YFM, and Newen are all live-pilot systems, i.e. the pilot rotates with the cutter. Only the very best systems, such as the Serdi, Mira, Hunger, YFM, and Newen, are also head-loading.

Head-loading systems have improved in recent years. The issue has been rigidity. Serdi's and Hunger's earliest portable units using jointed brackets flexed and thus frustrated all that was otherwise superior in the design. Serdi later changed to an electromagnetic mounting system and this has become the standard throughout the industry, with Serdi's competitors such as Mira also going magnetic. The cutter has the foundation of the mass of the cylinder head and can thus refinish the seat without the influence of flex.

One further advancement is noteworthy. Head-loading valve seat cutter systems used by production cylinder head shops are available in floor-mounted versions with air tables and even computers for the repeatable high accuracy demanded by these operations. Serdi and especially Newen lead this highest-end segment of the industry. 5

Images below: The first image is of a first-generation Serdi tool, the one that probably started the head-loading revolution. The second is the Mira, which represents the head-loading tool industry's move away from brackets to an electromagnet solution. Both the Serdi and the Mira (what I have) are made in Switzerland.

1-Though there are literally dozens of different ways to machine a valve seat, these can all be boiled down to the two categories enumerated in this article: dead vs. live pilot and guide-loading vs. head-loading.

2-Any tool using a live pilot -- even Honda's pedestrian 1960s-era fluted cutter system -- is vastly superior to any with a dead pilot. The only thing that made dead-pilot systems work adequately despite their flaws was the very loose valve-to-valve guide clearance typical in old car engines that allowed the valve to force-locate on a non-concentric valve seat.

3-Though dead vs. live pilot is important, the industry eventually began to focus on loading.

4-In fact, if not for valve seat shifting, rigid-loading cutting systems like the Serdi would likely never have been invented. The valve guide has been both the locating point *and* the loading point for so long--more than a century--that it is only relatively recently that anyone has thought outside that box.

5-Of course, the state-of-the-art floor-mounted computerized Newen is a $100,000 machine. Unique about the Newen among all head-loading systems is that it alone cuts the valve seat one angle at a time, in a contour fashion, by advancing across, i.e. parallel to, the seat profile, a technique they call "single-point" and something that could be done only using computer aid. Serdi and all the other head-loading systems cut all three angles at a swipe, advancing into--actually scraping into (ninety degrees to)-- the seat profile. Both are excellent systems. 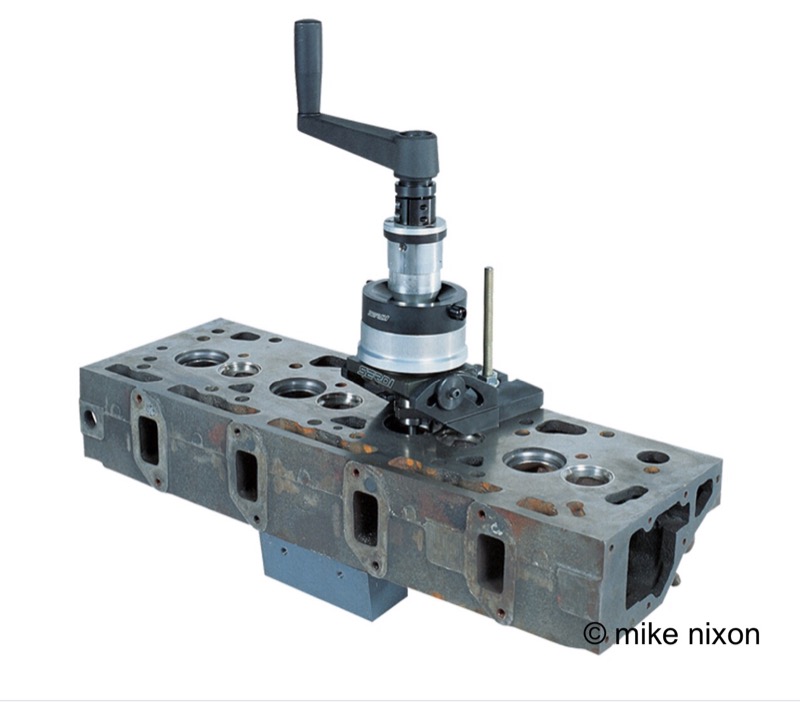 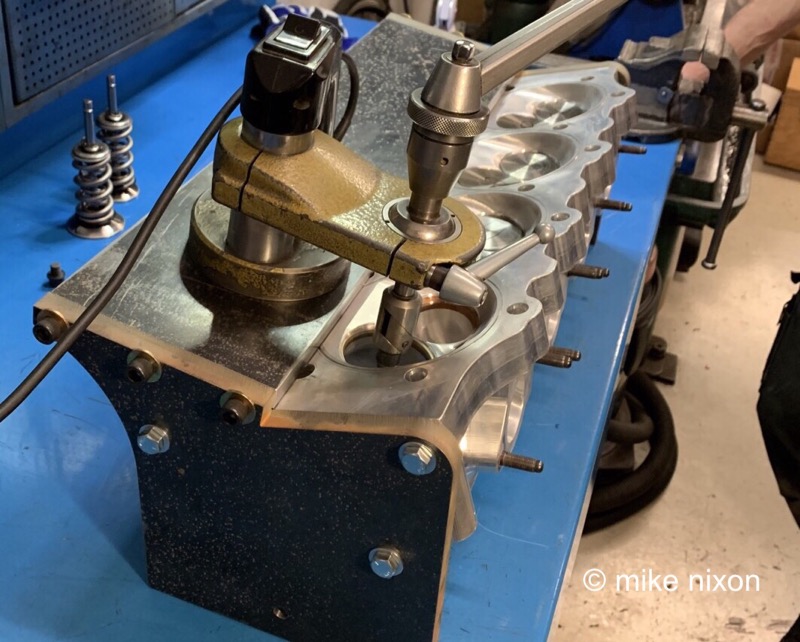 Although it's been many many years since I lapped a valve..
Top

Actually, there is one good thing to be gained by lapping the valves: finding bent valves. If the mating surface of the valve becomes shiny all the way around the valve is straight but if it becomes shiny on one side and stays dull on the other it has to be slightly bent.
Top

my wood valve lap handle (red, aren't they all red...) is almost old enough to retire on it's own...

How many heads have you done for me? I can vouch for the recovery of compression, power, and peace-of-mind paying to have the job done right. Great article.