We all know about the problems with rust inside the removable Frame Section. One of the problems I am seeing and hearing about more often these days is the centerstand cross tube. My Road bike is a prime example. Here is a pic of the proper angle for a centerstand, notice how it is almost verticle? Just past center when it stops 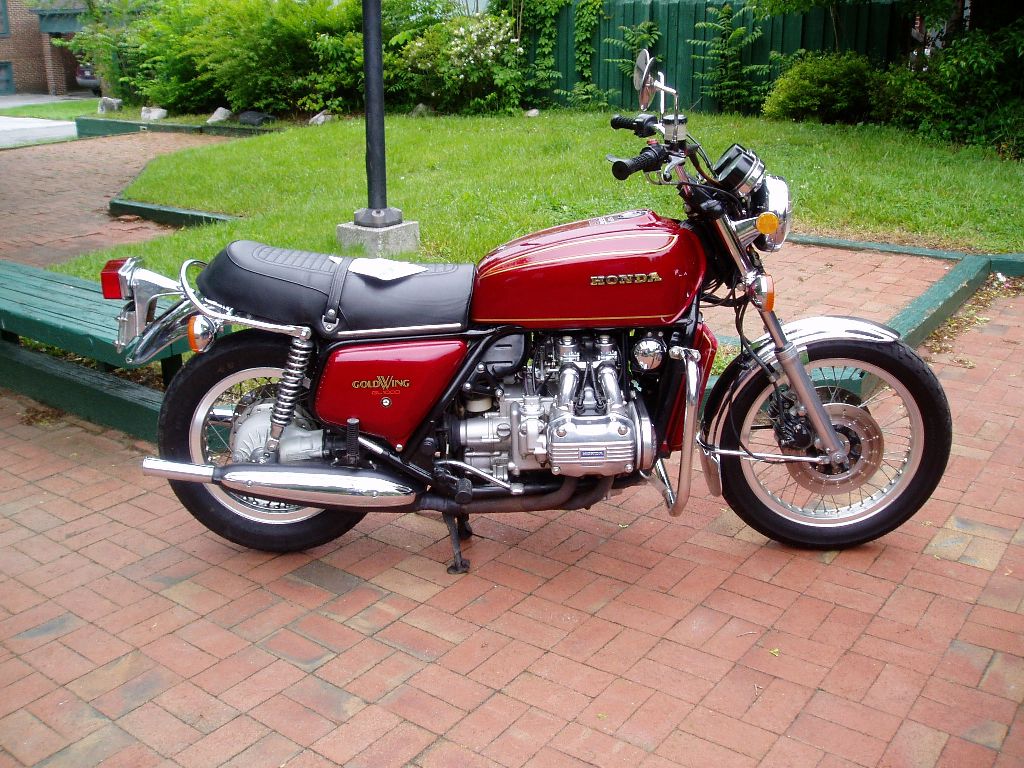 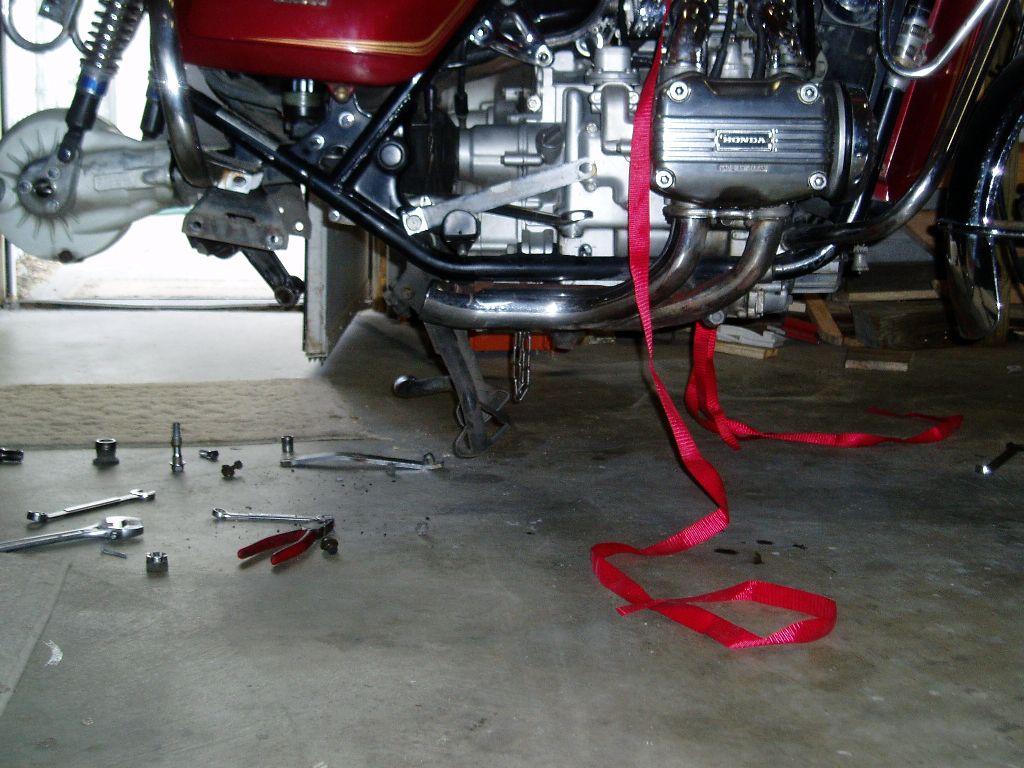 This happens when rust inside the frame causes the crossmember that the centerstand is bolted to weaken and start twisting. Eventually it will crack like the pictures below. 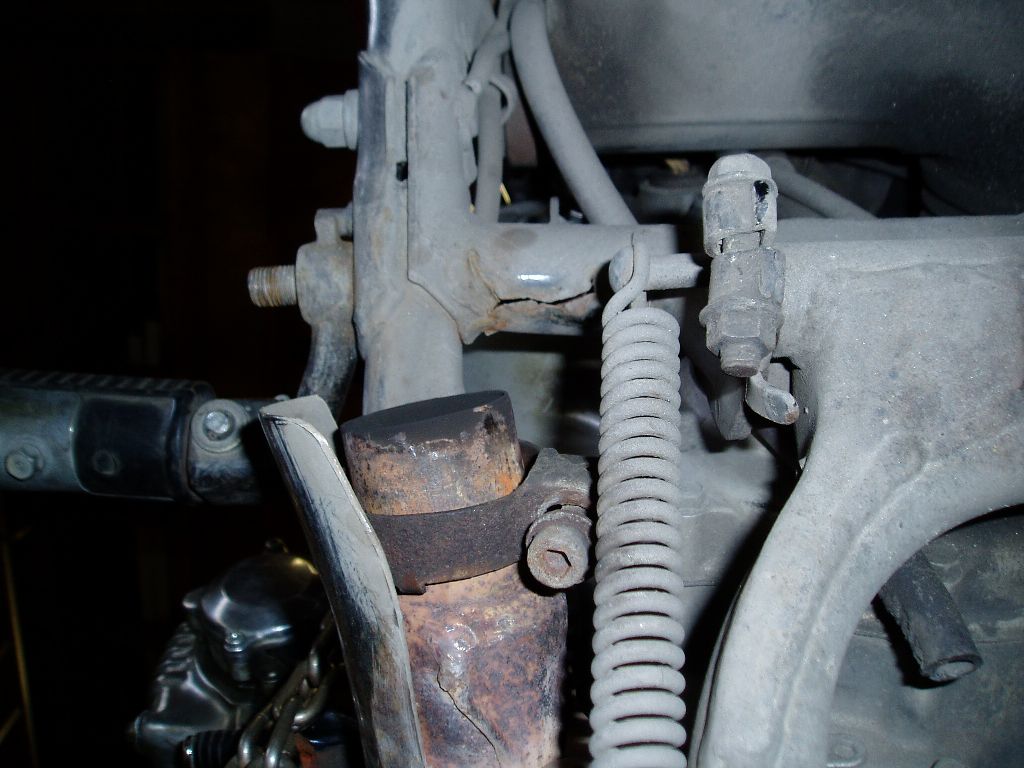 The Crack is clearly visible on the Left Hand side. 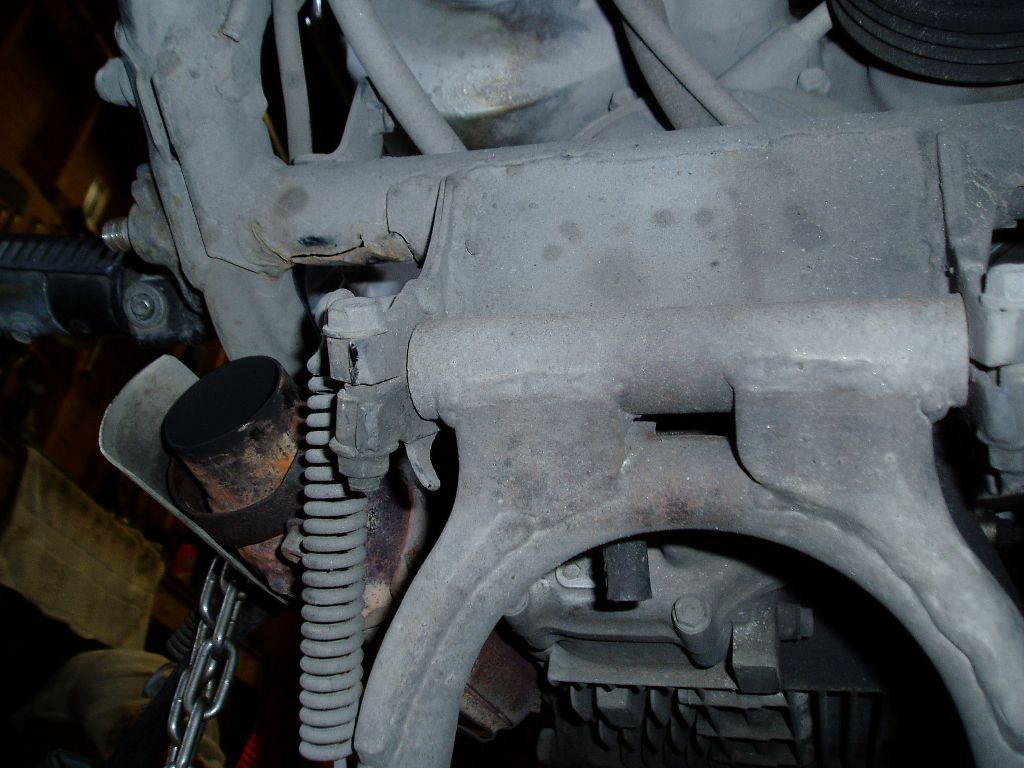 On the Right hand side it is just starting to make it's way through the outside of the frame. 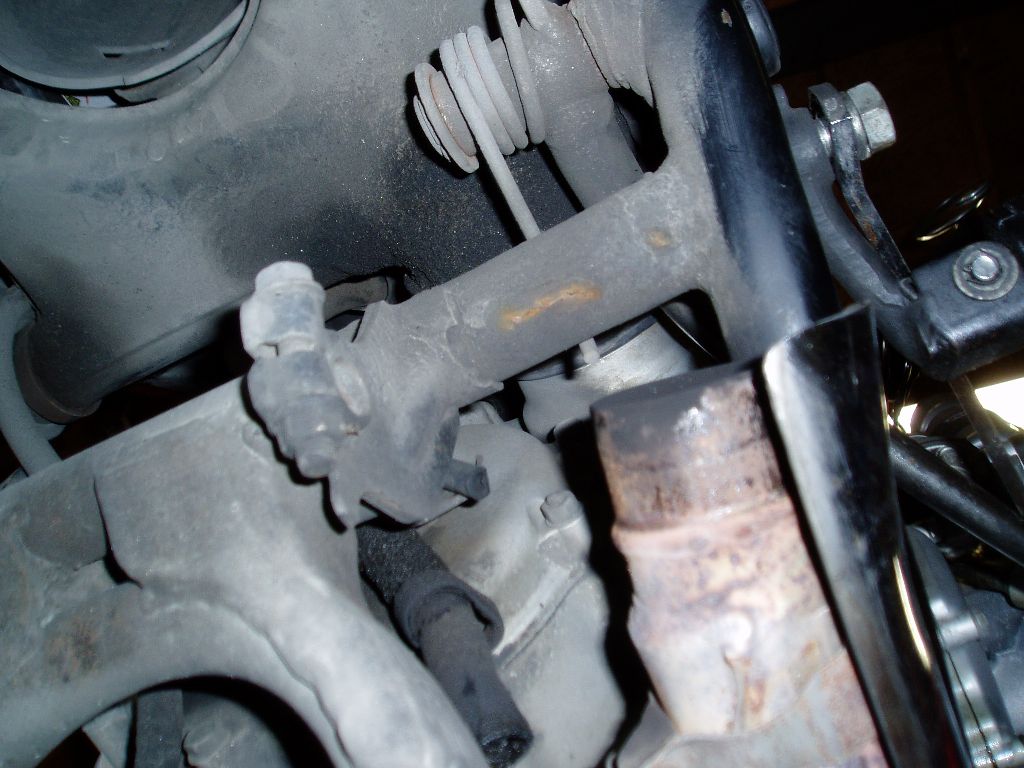 For 95% of us this would cause a frame change out to repair. If you are looking at 30 year old used bike make sure you put it up on the Center Stand and look at this area carefully.
"Agreement is not a requirement for Respect" CDR Michael Smith USN (Ret) 2017
"The book is wrong, this whole Conclusion is Fallacious" River Tam
2008 GL1800 IIIA "TH3DOG"
1975/6/7/8/9 Arthur Fulmer Dressed Road bike
1975 Naked Noisy and Nasty in town bike
and a whole garage full of possibilities!!

There is no real way to tell how bad any part of the frame is rusted, unless you drill holes and figure a way to shake the frame to see how much rust comes out. That is why I will build a frame for my hot rod 1100. It will be like a stock frame mixed with the Norton Featherbed frame, but with some safety features. It will use the stock front and rear suspension but will be completely welded with no way for air to get into the inside of the frame.

Rust is like leprosy. You never really know when a part will drop off.

For general riding, you can just do a monthly check for visible cracks, or do it every oil change.
"Some Cats Got it, Some Cats Ain't"
Top

This might help if you could find a way to get it inside the frame:
18" FIBRE OPTIC SCOPE

Sorry - they don't ship outside Canada
Mr. Honda ('83 GL1100/Dnepr) summer How a motorcycle evolves thread
The Famous Eccles ('84 CX650EI/VeloUral) winter Never Ending Build (CX500forum)
Click: Colour schematics for all GL1000 & GL1100 and GL1200 standard models plus instructions on how to download the full size version
"A guy with two sidecars can't be all bad." - Cookie
Another guy with two sidecars..... Hmmmm... must be something to that....
Top

ok .. I have this problem

so I have a nice sized hole in the ride I bought and am repairing. It's right where you show the split starting. I've probed and pulled a fair amount of rust out of the crosstube. Now I DONT have it in me for a new frame. Am I hosed? Can I weld on a plate there , maybe a steel pipe cut in half to seal the crosstube? JB weld? or am out a lot of time and money?
Baci, RoninMC
"Ride...Ronin, RIDE!"
78 gl1000 daily rider
'79 Vespa P200E project scoot
Top

Cut it out, replace with new tubing, and forego the centerstand is the easiest.
I found the end of the internet

I had one that the center stand was cut out of and using some mild steel I shaped it then welded it back together. It worked fine. That is what I would do. I would clean up as much as you can then weld steel over the existing tube. Trying to cut one out then get the placement exactly right on a replacement is difficult. It can be done but it is much easier to fix the one that is there.

Here in this picture you can see the pieces I made laying on the ground. 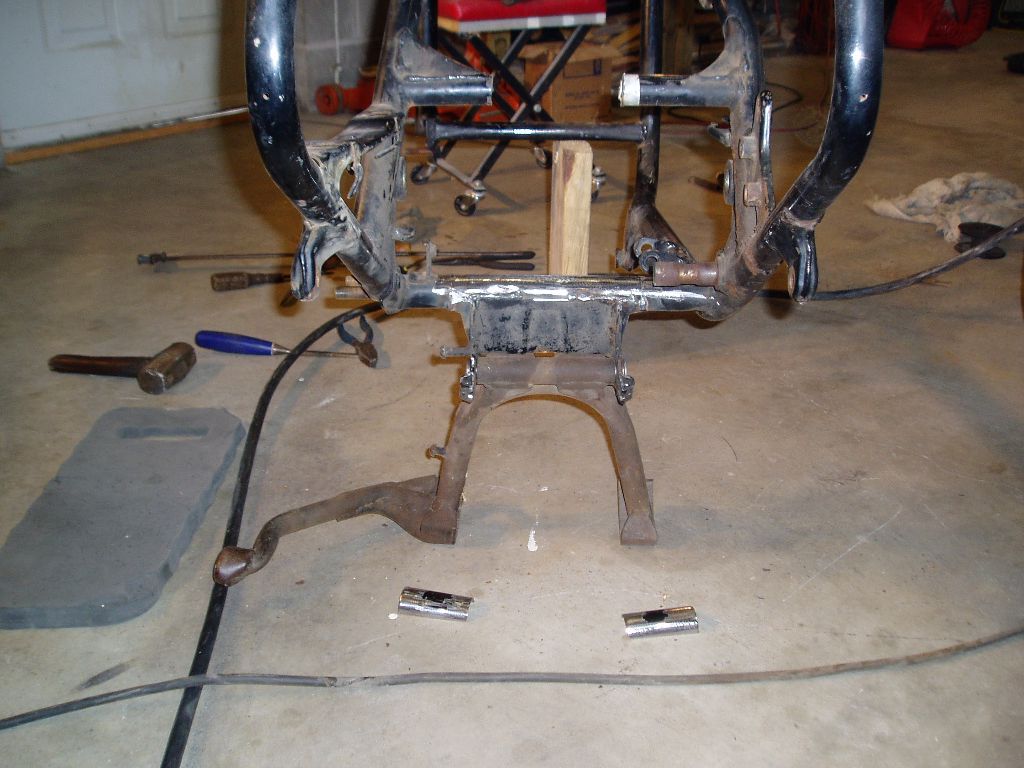 And here you can see the top plates in place. I made some for the bottom as well that reached to the main frame sides and welded the whole thing up. Worked fine. 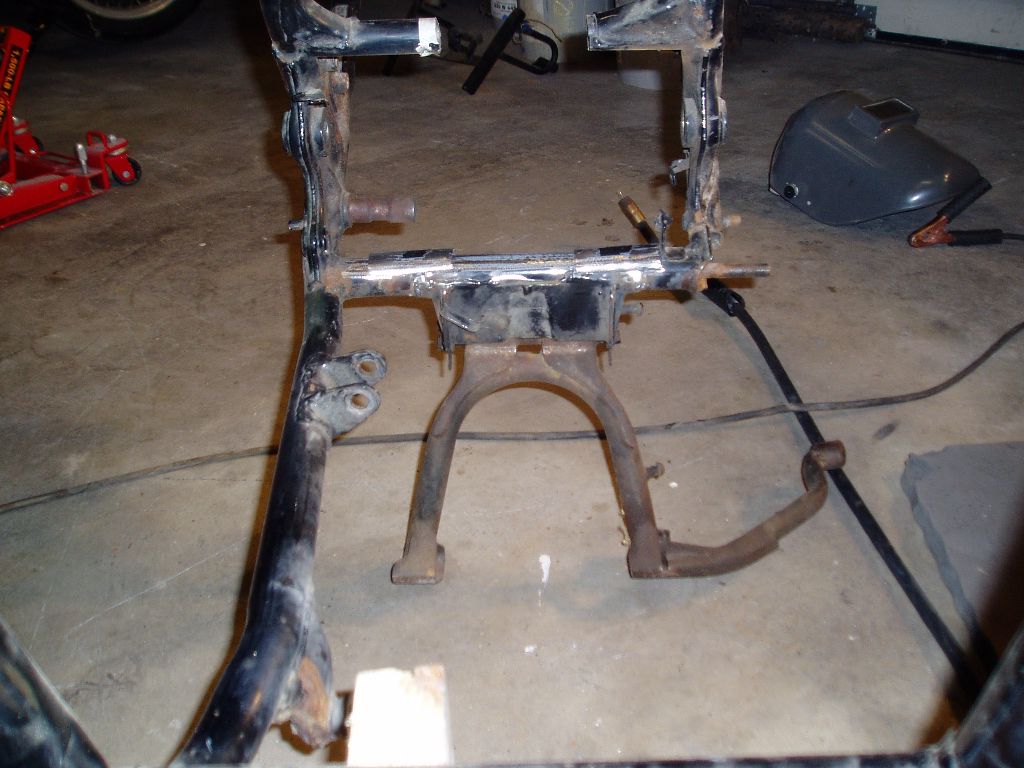 Just thought I'd report on my solution. When I took it in to a very accommodating local muffler shop for my custom pipe work, I had them hit the area hard with a grinder and then weld gusset plates on either side. They did a great job. Next time I have the thing up in the air, I'll snap a pic or two. I'm very please with the result. Best that could be for an "in place" solution.
Baci, RoninMC
"Ride...Ronin, RIDE!"
78 gl1000 daily rider
'79 Vespa P200E project scoot
Top

These are wonderful pics. thanks. It is just what I needed. I put my 77' up on the center stand about a month ago and boom...fell on its rideside.

Thank God it just missed the 2 new Harleys that was beside her. Well after a butt lift onto the kick stand I touched the centerstand and bong...it fell off. I just got under there this week to look at it and not sure what it was suppose to be like. this is the first close up pics of how to mount it....thanks. I think previous owner did not have the bolts out off the center stand when he tried to take off the muffler to get to the starter.
77' Goldwing - On the road again
07' Suzuki S40 - sold
06' Honda Rebel- traded up to S40
Top

Whiskerfish is like yoda... cg ganster yoda from episode 3
Top

Something that just occurred to me: The cross tube where the centrestand is attached is NOT the lowest part of the frame.

You will note that the damage to WF's frame is worse on the left side than on the right. I would expect that this is probably typical because that side is lower when the bike is on the sidestand. This would also contribute to a higher incidence of rust in the (removable) left lower frame tube than the right lower tube (the open ends of the removable tube don't help either).

I'm sure, however, that it is not always the case. If a bike was stored on its centrestand for an extended period or attached to a sidecar, any moisture (condensation, road spray - salted if used in winter, rain water)(ever use a pressure washer? not recommended for bikes...) that gets into the frame will probably end up inside the right lower tube.

In any case, rust on the bottom of the frame is definitely something that anyone buying an old bike should look for.

This doesn't look too bad, does it? How far is it from cracking like the other side? I wonder how that sort of damage to the right lower tube would effect the handling? Or how long it would last if a sidecar was attached to it?

Suggestions:
1) We should all examine our frames periodically for this sort of damage.
2) It might be a good idea to put a good quality high creep rust preventative oil in the frame of any bike to help stop the growth of rust where you can't see it. On RustCheck's recommendation, I have been using their Rust Inhibitor (red label) inside the frame of my winter machine. I think I will start putting it inside the 'Wing's frame too.
BTW: I experimented with this stuff before I started using it. I sprayed approx. 3/4" sized spots of a number of spray can oils/greases onto an 18" long piece of very rusty angle iron, a couple of inches apart. A day later I couldn't find the spots from WD40 and silicone spray and the white grease had not changed, but the RustCheck red had spread about 2" on each side. Over the next few days it spread over most of the piece of angle iron and it eventually became so thin I could no longer see a distinct line where it ended. And all that from just a few drops. A few ounces inside a frame, left to creep for a couple of weeks, should form decent layer.

Also, someone who cuts up dead cars once told me that when they cut through the door of a car with any other oil treatment the area inside the folded seams is dry, but on cars that have the RustCheck decal the oil has spread through the entire seam.
Mr. Honda ('83 GL1100/Dnepr) summer How a motorcycle evolves thread
The Famous Eccles ('84 CX650EI/VeloUral) winter Never Ending Build (CX500forum)
Click: Colour schematics for all GL1000 & GL1100 and GL1200 standard models plus instructions on how to download the full size version
"A guy with two sidecars can't be all bad." - Cookie
Another guy with two sidecars..... Hmmmm... must be something to that....
Top

The bike with the cracks was my Fathers original 78 that I took off the road 2 years ago now I guess. If there was no snow on the ground he rode to work in the railroad yards of Buffalo NY and parked the bike there while he worked. So for a couple of decades this bike was exposed to some extremely corrosive environmental conditions. Lots of Coal dust, Black rain from the constant diesel exhaust of the yard engines, and of course the salt on the roads all took their toll. But still I agree there is no doubt in my mind that this was preventable if the frame had been treated on the inside.
"Agreement is not a requirement for Respect" CDR Michael Smith USN (Ret) 2017
"The book is wrong, this whole Conclusion is Fallacious" River Tam
2008 GL1800 IIIA "TH3DOG"
1975/6/7/8/9 Arthur Fulmer Dressed Road bike
1975 Naked Noisy and Nasty in town bike
and a whole garage full of possibilities!!