I know it's not Goldwing-related, but I think I may have finally met my match, so to speak...everyone says 'realizing you have a problem' is the first step in acknowledging an addiction - but I came across a what-looks-like a 1984 Kawasaki Voyager a few hours away for (asking) $500...I like the look of the pre-'84 models, but still... Six cylinders! - and did a little more research...853 pounds! That is Huge! Anybody ever have/had one of these behemoths? Are parts scarce/hard to find?
Top

Last I knew desertrefugee had, or still has, a ZN of his own. He was customizing it if I remember correctly.

The motor shares a lot of commonality with the slightly earlier KZ1300, and I've had one of those for a while. I can't speak for handling or the tupperware, but the engine is solid. There's some rumblings about bad cam chain tensioners, but that may have been sorted with the ZN. It's definitely less finnicky than the CBX, a bit more straightforward, less over-engineered. Fuel injection was an option close to that time frame, which would get you an extra couple of horsepower.

Parts are definitely an issue. You're NOT going to want to buy a basket case. Much harder to find parts for than a Goldwing, and more expensive when you do- Kawasaki was not as good as Honda when it came to re-using common parts across several models. Not sure about the ZN, but the big KZ is at that point in it's life where people are making custom replacement parts because stock parts are so hard to find. That said, if you're not 100% concerned with originality and are okay with generic aftermarket parts on a solid core, you potentially have a really fun bike.

You mentioned weight, and yes, they are HEAVY. My stripped down KZ1300 was a bit heavier than my naked-with-bags GL1200, but there was much more weight in the motor, and it was a lot higher up. I can't imagine how much a full touring package adds to that. A big reason the Voyager dropped to 4 cylinders later in life was because the added power of the engine didn't do much apart from pulling along the added weight of the two extra cylinders.

If it runs and doesn't need anything apart from the basics (brakes, tires), $500 is a decent deal. If there's a lot of work that needs put into it? Unless you're willing to toss money at it, I'd say no.

My baby, as she currently sits. 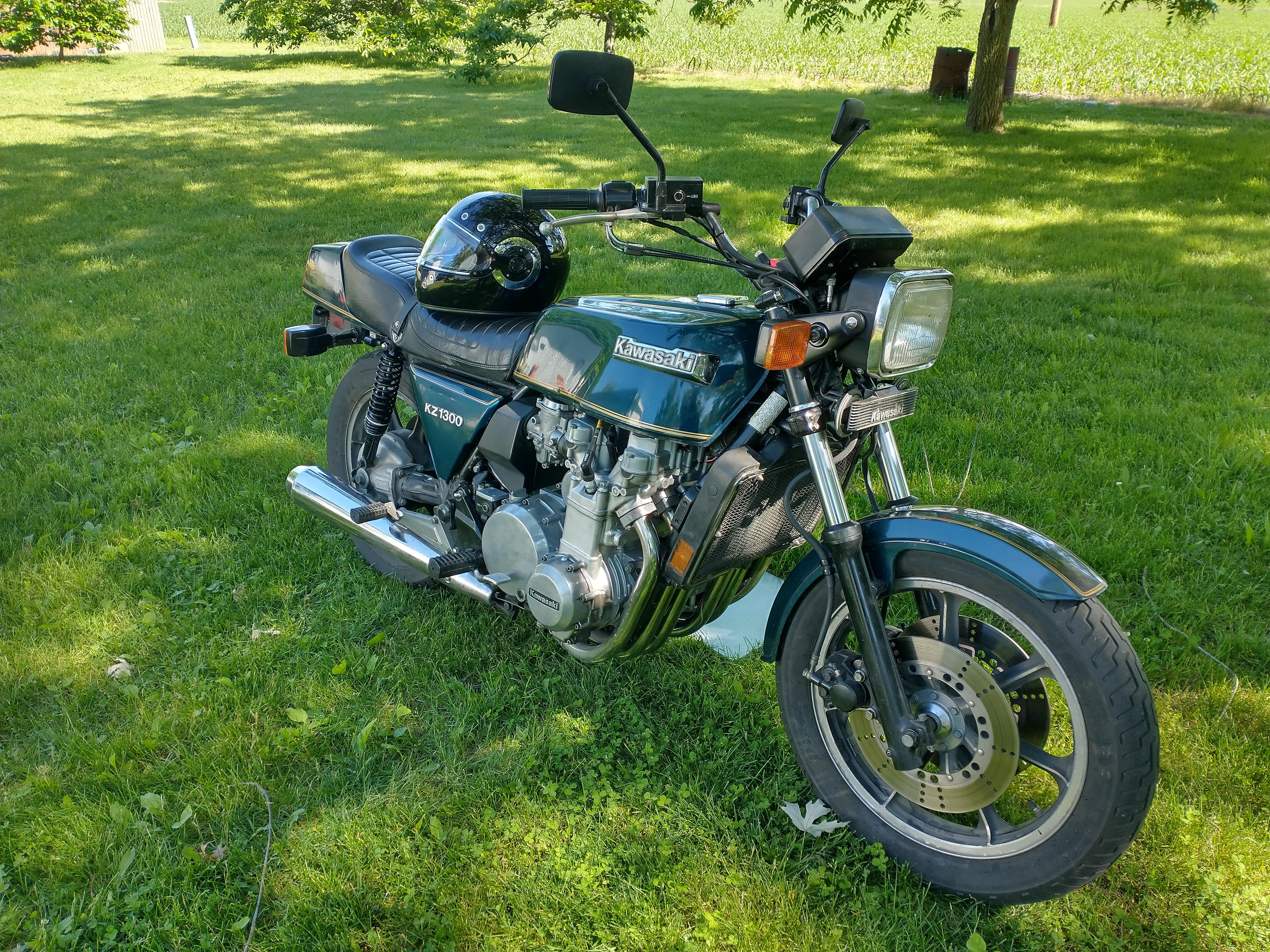 Yeah, I hear ya - Big Bikes equals Big Bills...and it Is an '84...I'm looking for something more along the lines of yours - Pretty bike though - where did you find that one?

And I thought my 'Wing was heavy...!
Top

Hoo boy, you had to bring this beast up...

Well, here's the deal. I still have it. I can tell you for sure that there's not another one like this in the world!

One of the main reasons I jumped on this beast even though it had been off the road for years was that it ran so darn well. The guy had kept fresh fuel in it and had habitually fired it up periodically. It ran well when I got it home, too. It even ran well after I stripped all the fluff off and gave it a personality make-over.

Then I took it for a couple of spins on the road. I have probably put 10 miles on the thing. First couple of runs went great. Bike moves right along. I don't have enough seat time to make a decent comparison to the CBX except for one thing - it is heavy, even after the diet.

But... what is going on with it now? It seems that there's an issue with the "computer" controller. Apparently, it only manifests itself while underway, i.e. in the presence of vibration. There's an intermittent in there somewhere such that the fire and fuel start going away. It first starts misfiring like crazy and almost immediately, the fuel pressure starts to fluctuate wildly. It could be somewhere in the harness, but I don't think so. I have gone over the connections that remain and spotlessly cleaned them all. Also, the bike still needs some suspension love. Other than those "minor" issues, she's ready to rumble!

So, I spent quite a bit of time (coupla weekends) looking for the culprit and then a few other distractions preempted further work at the time. That time has now stretched over a year! Sheesh. But, it is on my agenda to address once my "season" cranks back up. I'm tired of looking at it. Sitting there. Mocking me.

I still maintain that this machine will make somebody (maybe even me) very, very happy once it's sorted out.

Here's a thread on that thing that I ran here when I was stripping it down and retrofitting it. My information showed that, wet, they were 903 lb! I probably stripped 250 pounds or more off of this thing, I don't know how much it weighs now, but again, it is still heavy even after the diet
.
https://www.ngwclub.com/forum/viewto ... Kawasaki
- Life is not about waiting for the storms to pass. It's about learning to ride in the rain.
Top

Dr. Frankenstein wrote: ↑Tue Sep 21, 2021 4:41 pm I'm looking for something more along the lines of yours - Pretty bike though - where did you find that one?


Managed to snag it for a rather good price (including shipping) from a craigslist ad out of Idaho. The downside is that I've been playing with it for something like 5-6 years and I STILL haven't sorted it out perfectly yet. It's probably half the bike, half my lack of mechanical skills. I feel like I'm close, though....

Bargains on the early KZs are out there, but rare. I've seen several on facebook's marketplace in the $5-$7K range (much more than I paid for mine) pretty consistently, ready to go- getting up there, but nowhere near the $10-$15K that a decent CBX will run you. Not bad for an "entry-level" inline 6.

That said, when these things hook up at about 4.5k and everything is hitting just right- there's definitely something special there.

(That said, you want a six cylinder bike for specifically touring, a GL will blow it out of the water.)
1997 Valkyrie- Light Cutomization, but Too Busy Riding
1969 CT90- Melted Wrist Pin Circlips. Somehow.
1976 GL1000 (Yellow)- In Many Pieces Scattered Around the Garage
1980 KZ1300- Deciphering Carb Tuning Mysteries
1972 CB750 Barn Find- Sidecovers Away At Painter
1974 Velosolex 3800- Better Than Walking

DesertRefugee, could it be the TCI/CDI module? (computerized ignition?) I thought I read somewhere the ZN1300 has a CDI, like my '85 Virago; I was having trouble with IT, too, and sent it away and got it refurbished and it ran great after that.